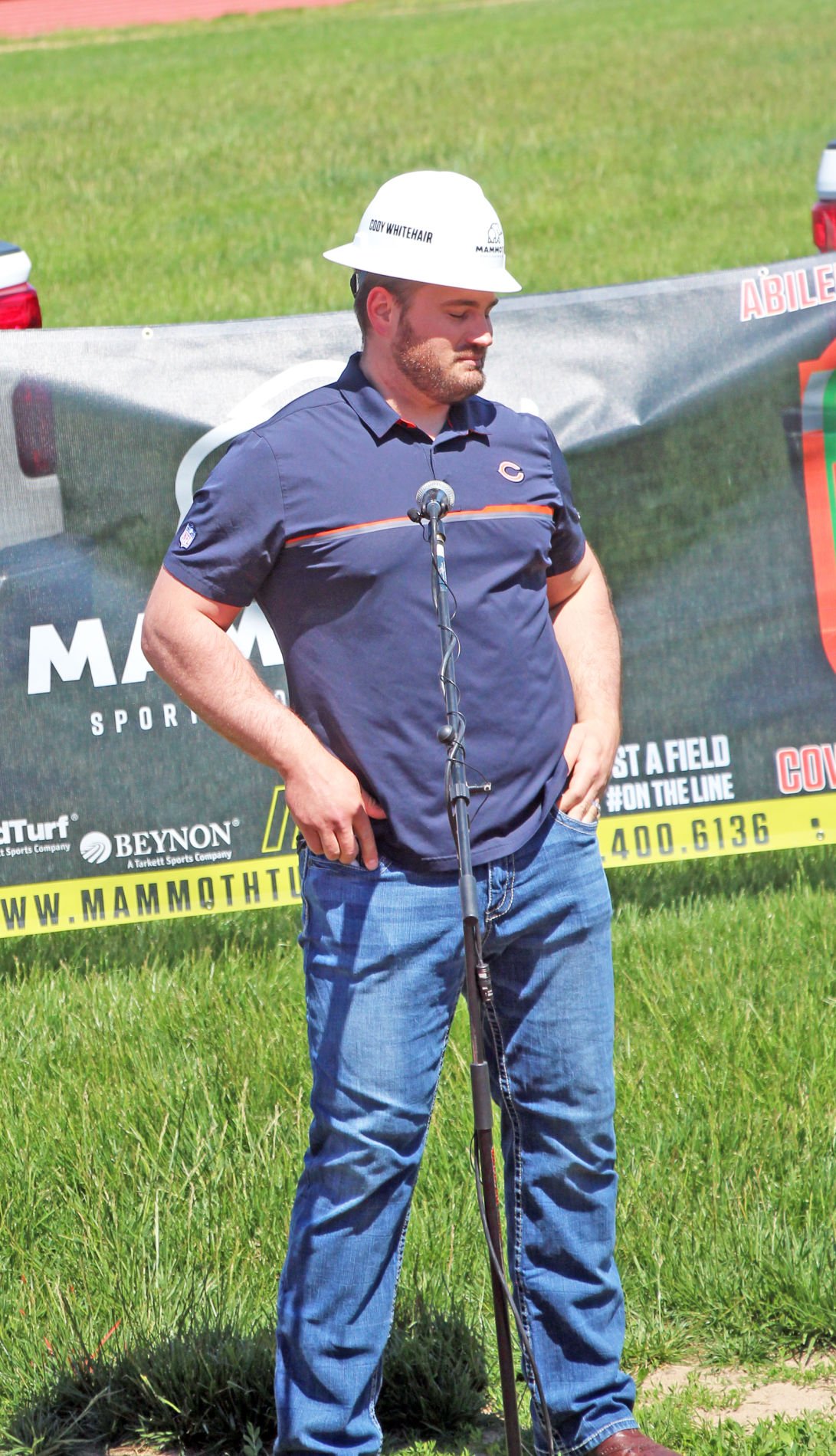 Abilene High School alum and Chicago Bears offensive lineman Cody Whithair prepares to speak about his Practice with the Pros football camp to be held in Abilene in late June. At right Whitehair, his wife Hannah and daughter Blakely ‘dig in’ during the groundbreaking ceremony at Cowboy Stadium last week. 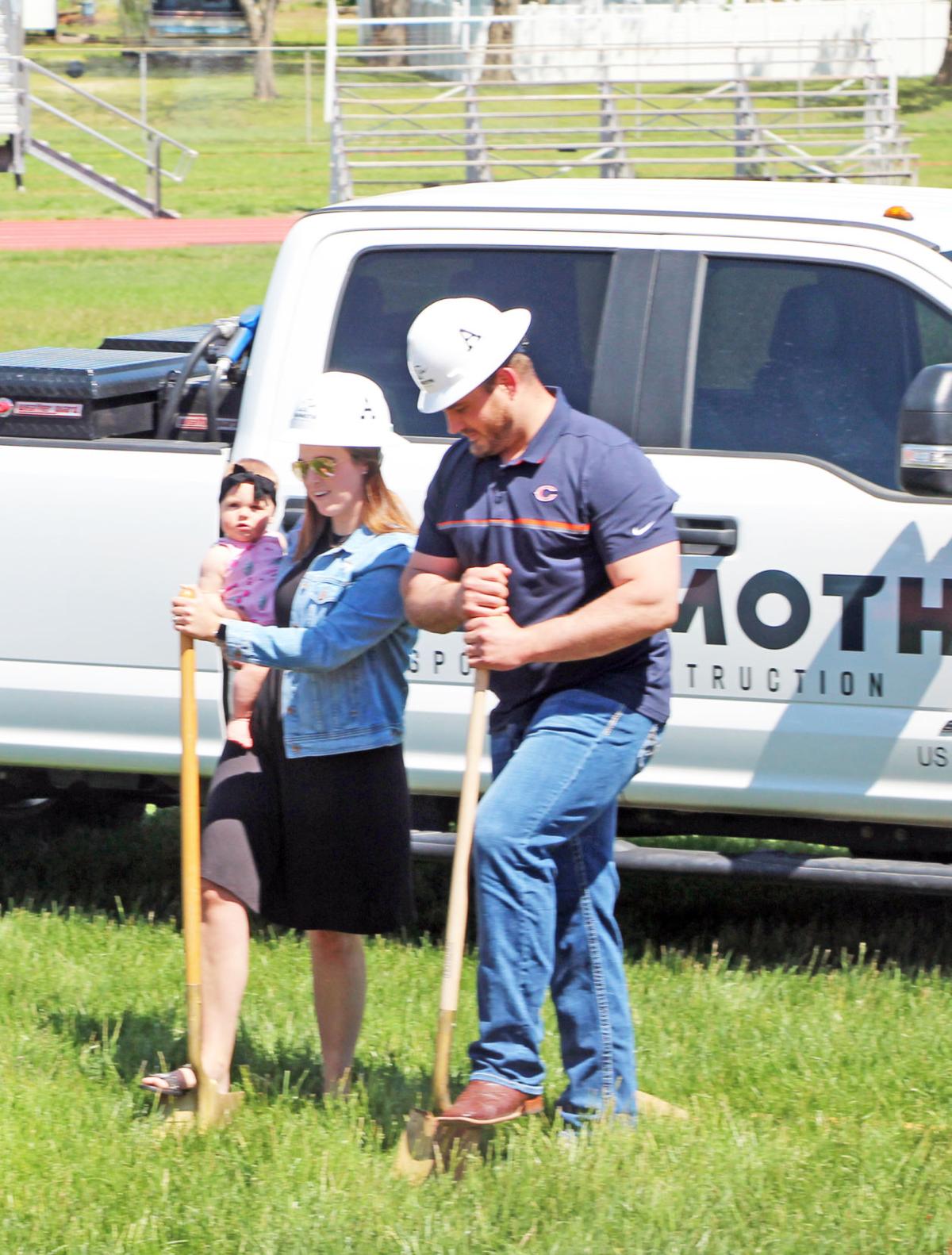 Abilene High School alum and Chicago Bears offensive lineman Cody Whithair prepares to speak about his Practice with the Pros football camp to be held in Abilene in late June. At right Whitehair, his wife Hannah and daughter Blakely ‘dig in’ during the groundbreaking ceremony at Cowboy Stadium last week.

“I am really excited to bring a football camp to Abilene this summer,” Cody Whitehair said last week while in Abilene attending the groundbreaking of the Mammoth Construction project at Cowboy Stadium.

Whitehair, alum of Abilene High School, Kansas State University and an offensive lineman for the Chicago Bears, his wife and daughter attended the groundbreaking ceremonies as a special guest of Abilene schools and Mammoth Sports Construction. Mammoth will be a corporate sponsor for Whitehair’s professional football camp in late June.

“At this time the camp is still a go,” Whitehair told the crowd gathered at the groundbreaking. ‘We are still finalizing details and we are very hopeful that the camp will be able to happen. COVID-19 has put restrictions on people and those restrictions are different in different parts of the country. Obviously the safety of the community is our main thing. We don’t want to bring the virus here. We are just going to leave it in the air for right now but the camp is till on as scheduled and we are going to make it happen.”

Original plans called for Whitehair to bring numerous current NFL players to Abilene to help with the three-day camp. Whitehair commented that those plans are still in the working phase but that he is also planning on using a lot of local guys.

“We are going to get a bunch of local guys, that’s kind of my thing too with this camp,” he said. “I want to ring in as many local guys as I can. Guys that have played here. With the hype and everything that is going on in the city right now, getting everybody back together, the alumni of Abilene and people that have continued on wherever it is, get them all together.”

While Whitehair and the camp organizers are working hard on the plans for the June 29, 30 and July 1 ‘Practice with the Pros’ football camp, Cody must continue to find ways to keep in shape and work out during the pandemic in preparation for the next NFL season.

“It’s a different time right now with the virus going on,” he said. “But we making the best of it. We are figuring out ways to stay in shape and be ready for the season.”

With many unknowns as to when training camp might take place for the Bears, Whitehair and his teammates are social distancing, staying home for the most part and communicating virtually.

“We are in our virtual phase right now,” he said. “That goes through OTA’s, so everything is virtual for the most part. We are hoping to get back and firing up for training camp whenever that might be. Every thing is still kind of up in the air. We’ll have to see how the next month or two goes before we put anything set in stone.”

The Bears were busy over the off-season and during the recent NFL Draft as they acquired several new faces for the NFL locker room. The team acquired quarterback Nick Foles in a trade during the winter and have resigned Tyler Bray to backup starting quarterback Mitch Trubisky. Defense was the main focus of the general manager and head coach when making additions to the roster. Additionally the Bears added two offensive linemen to work alongside Whitehair in the college draft.

“We are really excited for the additions we have had to the team,” he said. “We are just so excited to be back around those guys and get to know them.”