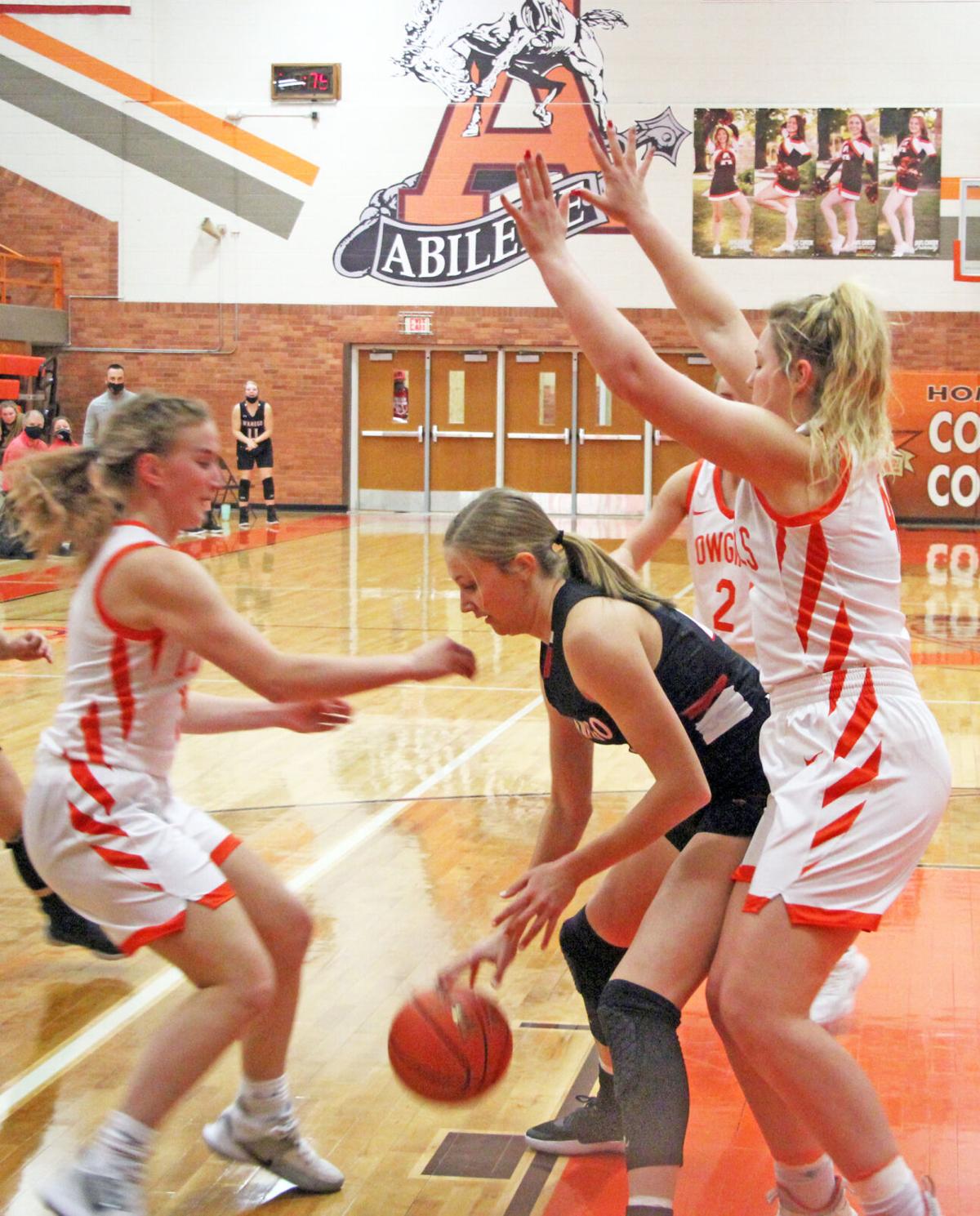 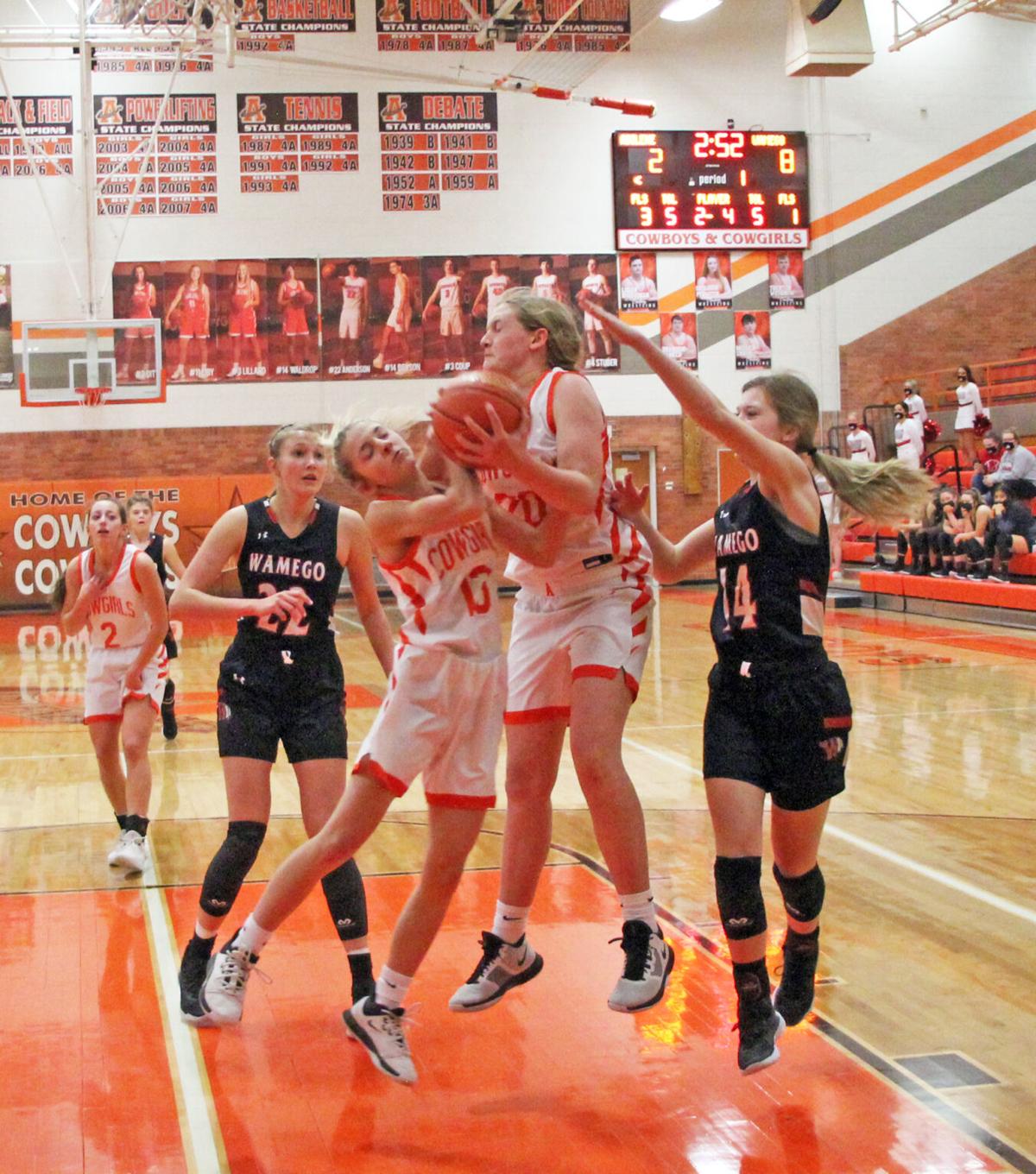 After suffering a double-digit loss on Friday to NCKL opponent Marysville on the road, the Abilene Cowgirls played their best game of the young season but were edged by the Wamego Lady Raiders 43-33 last night in Abilene.

The Cowgirls showed major improvement in defensive play, rebounding and running the offense. In fact, the Cowgirls fought back from a six-point deficit after the first quarter to take a four-point lead at the break. Abilene senior Abi Lillard spurred the turn around with an eight-point second quarter that saw her open the scoring with a deep three followed by a jumper to wrap up the period. With another trey from the corner Abilene came all the way back from down 8-2 after one to lead at halftime 18-14.

“Our focus coming into tonight was to start better,” Abilene head coach Mike Liby said. “We didn’t start good for several games. We did better tonight. We worked hard and came back and got the lead. The girls made a lot of improvements in several different areas. It was the first time we got to see someone full court press us for the entire game. We don’t get that very often. That is something that we have to work on as it created a lot of transition turnovers. I think in the end that’s going to be the difference in the ballgame.”

Lillard finished the night with 15 points including three threes.

Freshman Claira Dannefer was also big in the Cowgirls second quarter come back with a nice jumper followed by a big three that pushed the Cowgirls to a 15-12 lead, the first lead of the game by Abilene.

Abilene senior Reagan Ditto stole the ball and drove the court for a layup to begin the Cowgirls second half scoring. Ditto was also part of the Cowgirls surge on the boards as she finished with four on the night. Senior Allison Liby sparkled on the Cowgirl defensive end with 10 boards for Abilene. Junior Jenna Hayes brought down six and Dannefer grabbed five.

“I’m happier with our rebounding performance,” coach Liby said. “The stats will show that we did a lot better on the boards. We tried some different defenses tonight rather than just pure man. Trying to mix it up a little. Our zone worked pretty well.”

“We had some players really step up tonight,” coach Liby said. “I’m thrilled with Abi (Lillard) with her scoring particularly with the back to back games she has had. I think Allison (Liby) is continuing to be the fire we need on defense and Claira Dannefer stepped up again. She had some big rebounds and some points tonight too. We’ll keep working at it. We are really young but progressing a little at a time.”

Wamego senior Toree Hoobler put the Lady Raiders in front early in the fourth with a ringing three-pointer. Trista Hoobler came back with a bucket and Wamego had a four-point lead 31-27.

Ditto and Hayes hit free throws and Liby scored under the basket to help keep Abilene’s hopes alive in the fourth. Liby’s basket with 1:27 remaining proved to be the final points for the Cowgirls as Wamego went on to win 43-33 with the fourth quarter comeback.

Trista Hoobler led the Lady Raiders with a game high 16 points while Toree Hoobler finished with 10. Hayes had seven points and Dannefer added five for the Cowgirls.

The Cowgirls are 0-4 and still in search of their first win of the season and travels to Clay Center (5-0) on Friday. The Lady Tigers are undefeated and ranked in the state as they await the Cowgirls.

“Clay Center is ranked third in the state, I think,” coach Liby said. “They have a good solid team. They went to state last year and have most everybody back. They will be tough.”