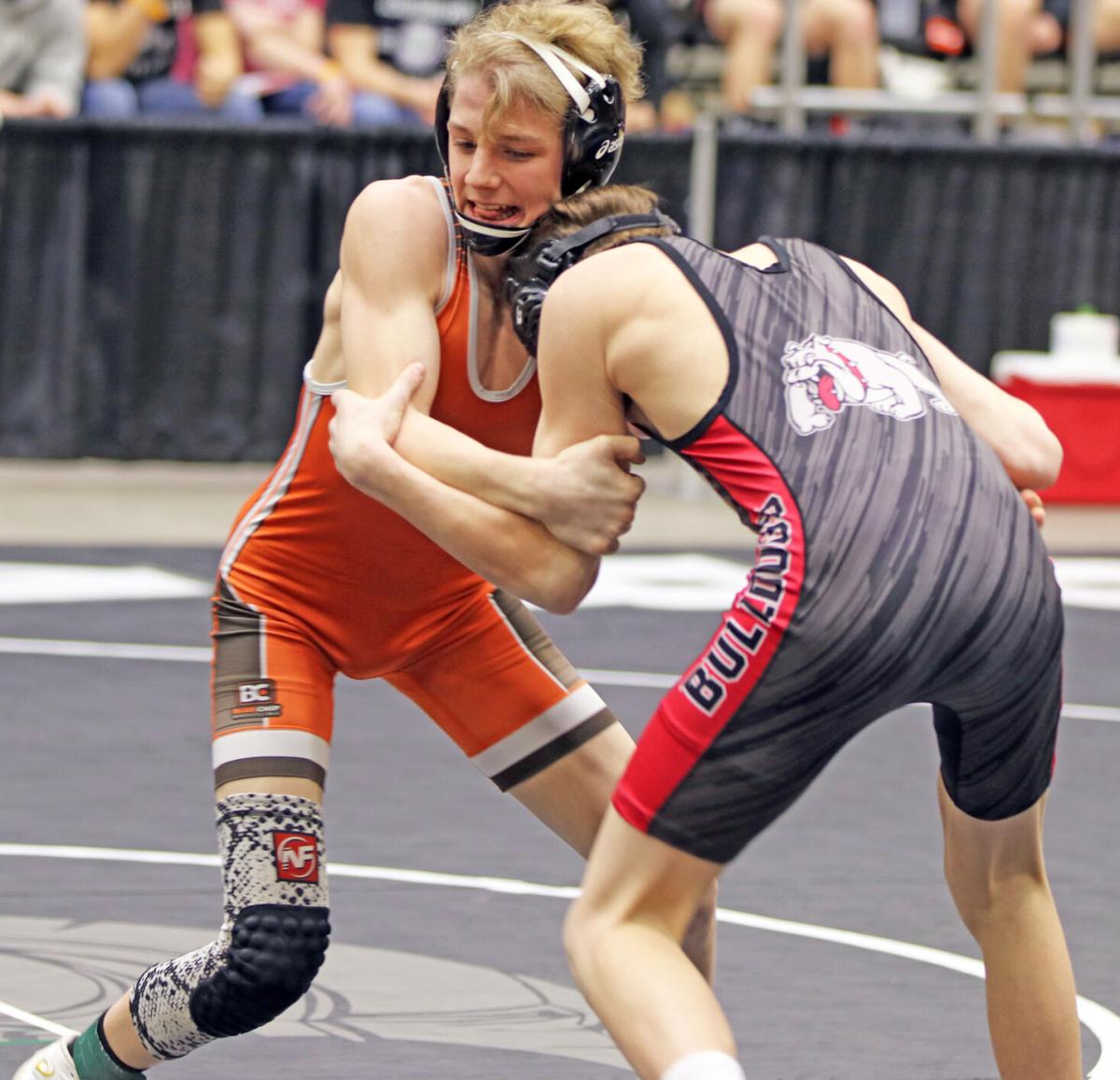 Freshman Tucker Cell (left and above) wins the Class 4A State Championship at 113 pounds. Cell gets a win by pin in just 39 seconds in the match at left over Garnett-Anderson County’s Aj Schaffer. Above in the championship match against Chanute’s Kolton Misener, it took a little longer, 66 seconds for the pin to win the state gold medal. 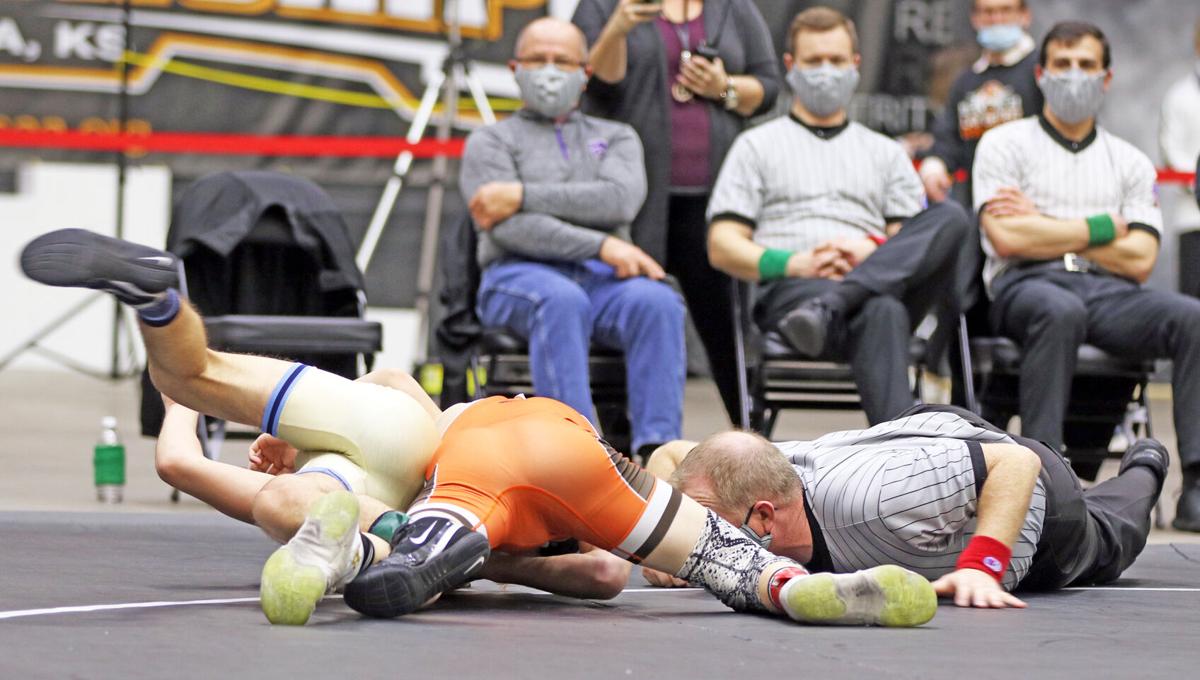 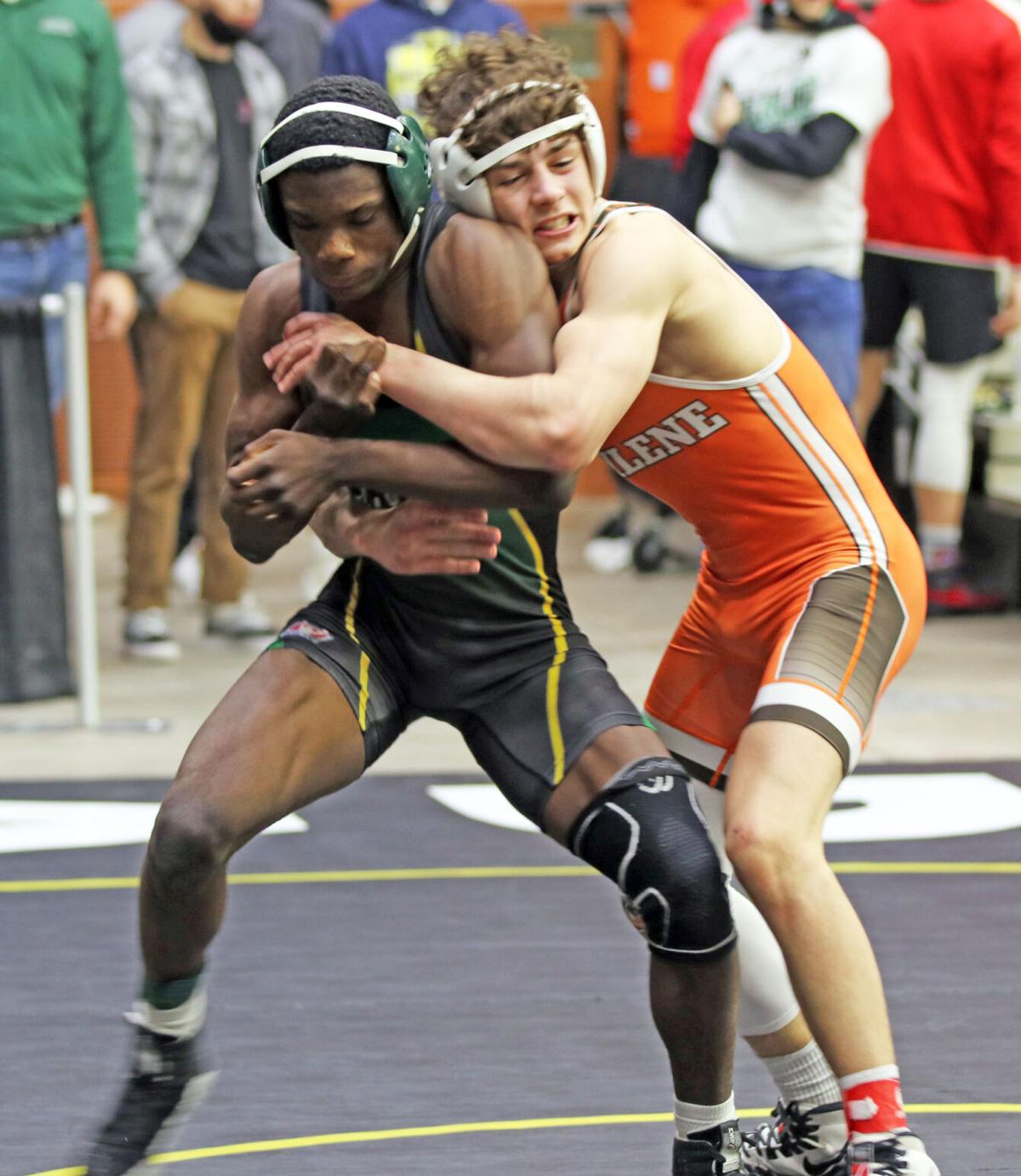 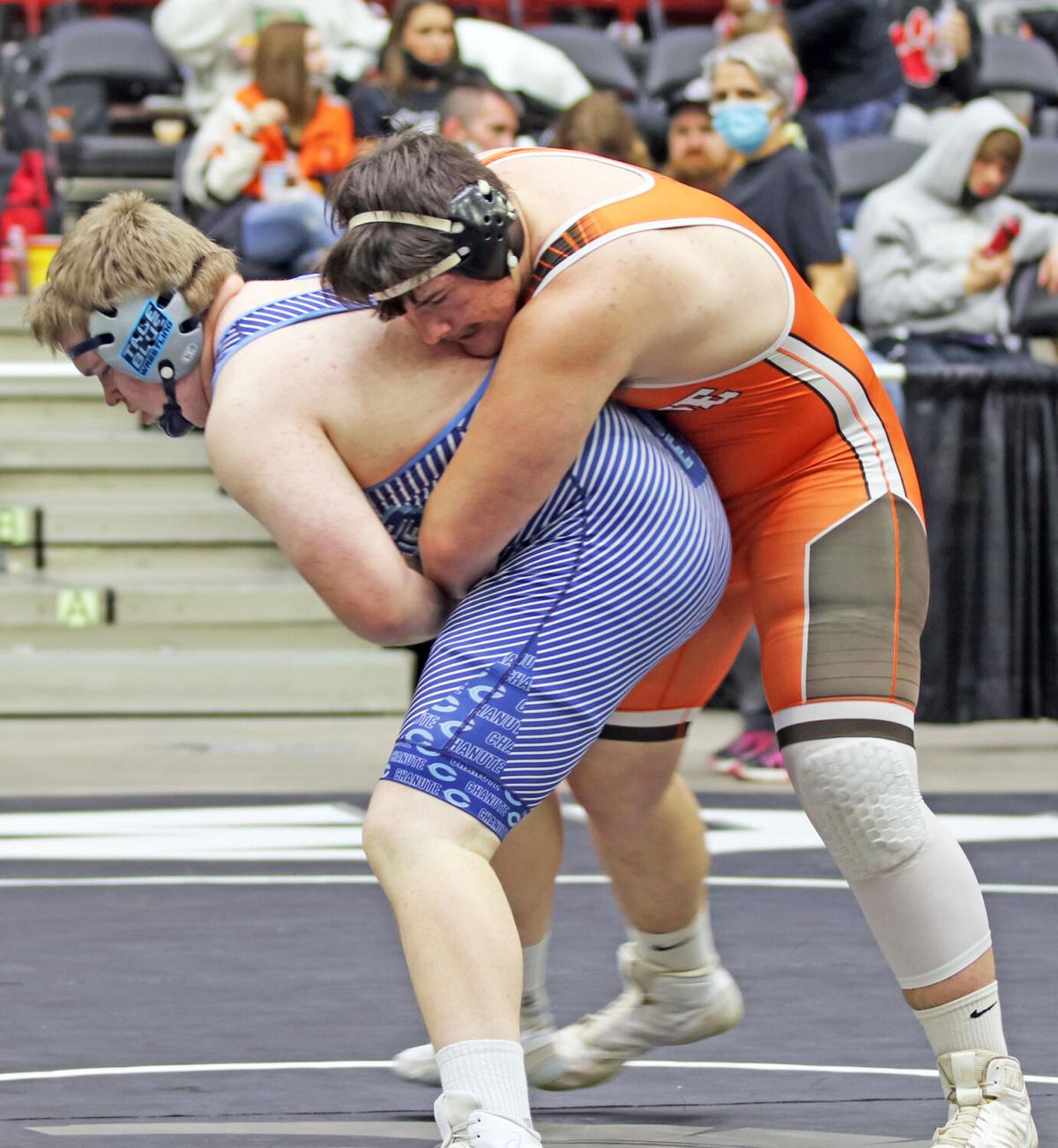 Freshman Tucker Cell (left and above) wins the Class 4A State Championship at 113 pounds. Cell gets a win by pin in just 39 seconds in the match at left over Garnett-Anderson County’s Aj Schaffer. Above in the championship match against Chanute’s Kolton Misener, it took a little longer, 66 seconds for the pin to win the state gold medal.

SALINA – Needing just one minute and six seconds, Abilene freshman Tucker Cell brought the roaring crowd to their feet as he pinned Chanute junior Kolton Misener in the Class 4A State Championship match at 113 pounds late Saturday evening in Salina.

Winning his first ever championship, Cell completed his own undefeated season going 38-0 for the Cowboys. Second ranked in the most recent Kansas Wrestling Coaches Association, the Salina native who transferred to Abilene High School this year wasted little time in attacking the older more experienced Misener. Misener had the number one ranking in Class 4A as well as being recognized as the projected number one wrestler through all classes at 113.

Misener didn’t know what hit him as Cell’s quickness turned a near takedown for Misener to an instant reversal, takedown and pin to win with just barely one minute gone in the opening period. The official slapped the mat and blew his whistle for the win and Cell was up like a cat beginning his long awaited celebration. Shaking hands with Misener, fist bumping the Chanute coaches, Cell with a smile as big as the state of Kansas ran to hug his head coach James Stout at the corner of the mat.

“It’s the best decision I’ve ever made in my life,” Cell said of his decision to go to Abilene. “I’ve wanted to be a part of his wrestling program since I was a little kid. I wrestled in the Abilene Kids Club since I was like five years old and I always saw the success Coach Stout had at the high school. I dreamed about doing this.”

Cell indicated that Saturday’s gold medal performance was the first championship that he has ever won, saying he had made it to the finals before but never finished on top. He said he had never won a state title and that he choked both times he could have won. He said Saturday it was clear in his mind what he needed to do to win.

“My plan was to go out there and get outside shots but when I got the undercut, he went to throw me so I circled my hips and processed through it and I stuck it from there,” Cell said about the exciting finish in the championship match.

“Ross Taplin runs the kids program in Abilene and everybody there does a really good job of getting us ready,” Cell said about his Kids Club experience in Abilene. “I’ve worked all my life to get to this. This is the happiest moment of my life. It means the world to me to have my teammates here with me today. It means everything. I am so happy.”

“I’m sure there have been days when Tucker might have questioned his dream of coming to Abilene with all the hard work we have done to get to this point,” coach Stout said. “Conditioning is so hard and the grind in wrestling is hard and he really needed that. He knew that and he really worked at it. This is just so awesome for him and our program.”

Stout referred to a few former Cowboy wrestlers that have the same quickness that Cell exhibits.

“We’ve had some really good ones come through Abilene but he reminds me a lot of 2000 graduate Dustin Tovar, who was very, very fast like him. The difference is Tucker has wrestled more in his lifetime at higher levels than Dustin did at the same stage in life. Dustin went on to be a two-time Division II All-American and had a great college career and has built a great life for himself. Certainly Tucker is a few steps ahead of where Dustin was as this stag of the game.”

Stout was quick to point out that he doesn’t want Cell to dwell on the possibility of being a four-time state champion. That would likely put too much undo pressure on him in the years to come to be expected to be a repeat state champion every year. He said they would take each year one day at a time, one match at a time and stay focused.

Cell opened tournament action with a 39 second pin in the opening round of his first match against Garnett-Anderson County freshman Aj Schaffer. In the semifinals Cell battled Tonganoxie’s Braden Moore for a 10-5 win by decision, setting up the championship match with Misener. Moore went on to finish third place in the bracket. Cell took the mat against Schaffer at about 12:15 p.m. Saturday afternoon and didn’t check into the championship match until almost 10 hours later.

Teammates Braden Wilson and Brandon Parker also qualified for the state meet and wrestled Saturday for the Cowboys.

“I am proud of Brandon and Braden both,” Stout said. “The eventual number one and number three was a pretty tough draw for Brandon to go through. He has made tremendous strides especially since Christmas when he was back from a football injury. Brandon receives the credit along with coach Corey Casteel for training with him on a daily basis and getting him here and giving him a shot at a state medal which he fell a little bit short of but he made so much ground up in the last two months.”

Wilson, a sophomore at 138 pounds, returned for his second year on the state mats and worked hard for a sixth place medal. Ranked as the sixth best in Class 4A, Wilson drew the number two ranked Collin Creach of Ottawa. Creach earned a 6-4 win over Wilson and he went on to finish third during the meet.

Wilson then met-up with Pratt junior Keishaune Thompson of Pratt. He had wrestled the Pratt Greenback at the Abilene Invitational Tournament earlier in the year. Wilson battled for a 4-2 win by decision. In the consolation quarterfinals, Wilson met Colby junior Tyler Voss. Voss won by a 6-0 decision that sent Wilson to the fifth place match where he fell to Mulvane’s Trent Moses. Moses took fifth place with a 10-0 decision. Moses had beaten Wilson 12-5 in the championship of the Class 4A Regional 2 championship at Circle High School.

“Braden has had some huge wins this year and he has grown a lot this year,” Stout said of Wilson. He’s put himself under a lot of pressure because he defeated two number one ranked kids in the regular season and I think that put him in a lot of pressure because he jumped to the top of the rankings and he is still just a sophomore. The next two years we certainly just hope to continually improve and if we continue to do the rights things with him, he should be back and near the top over the next couple of seasons.”

Senior Brandon Parker wrapped his high school career qualifying for his first state meet and finishing in the Top Eight of the State by making the tournament. Parker had tough draws in the competitive 285 bracket.

In his opener, he was pinned by eventual champion Brady White from Coffeyville-Field Kindley. He then wrestled the eventual third place medalist Nathan Cunningham of Chanute with the results being the same as his first match.