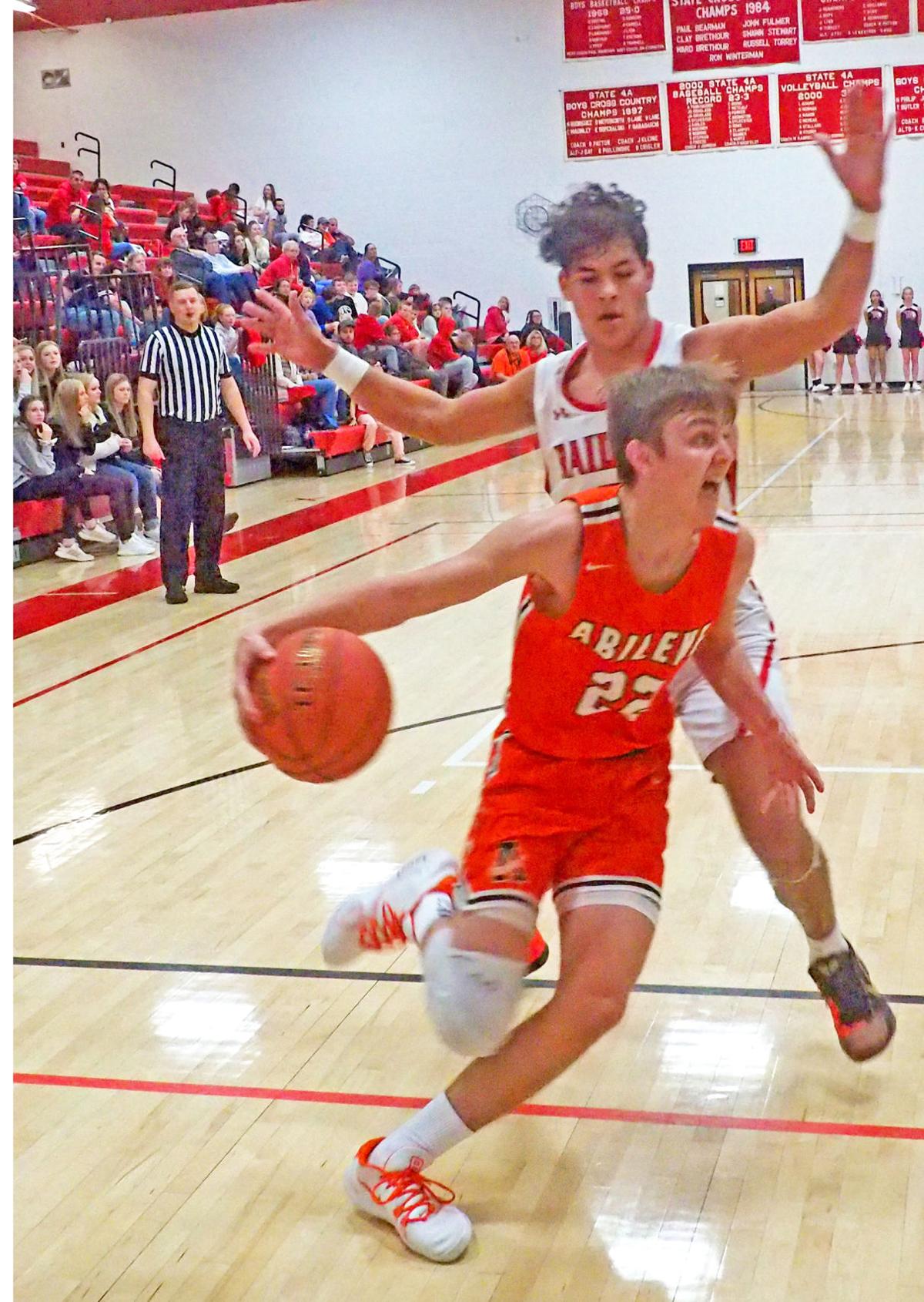 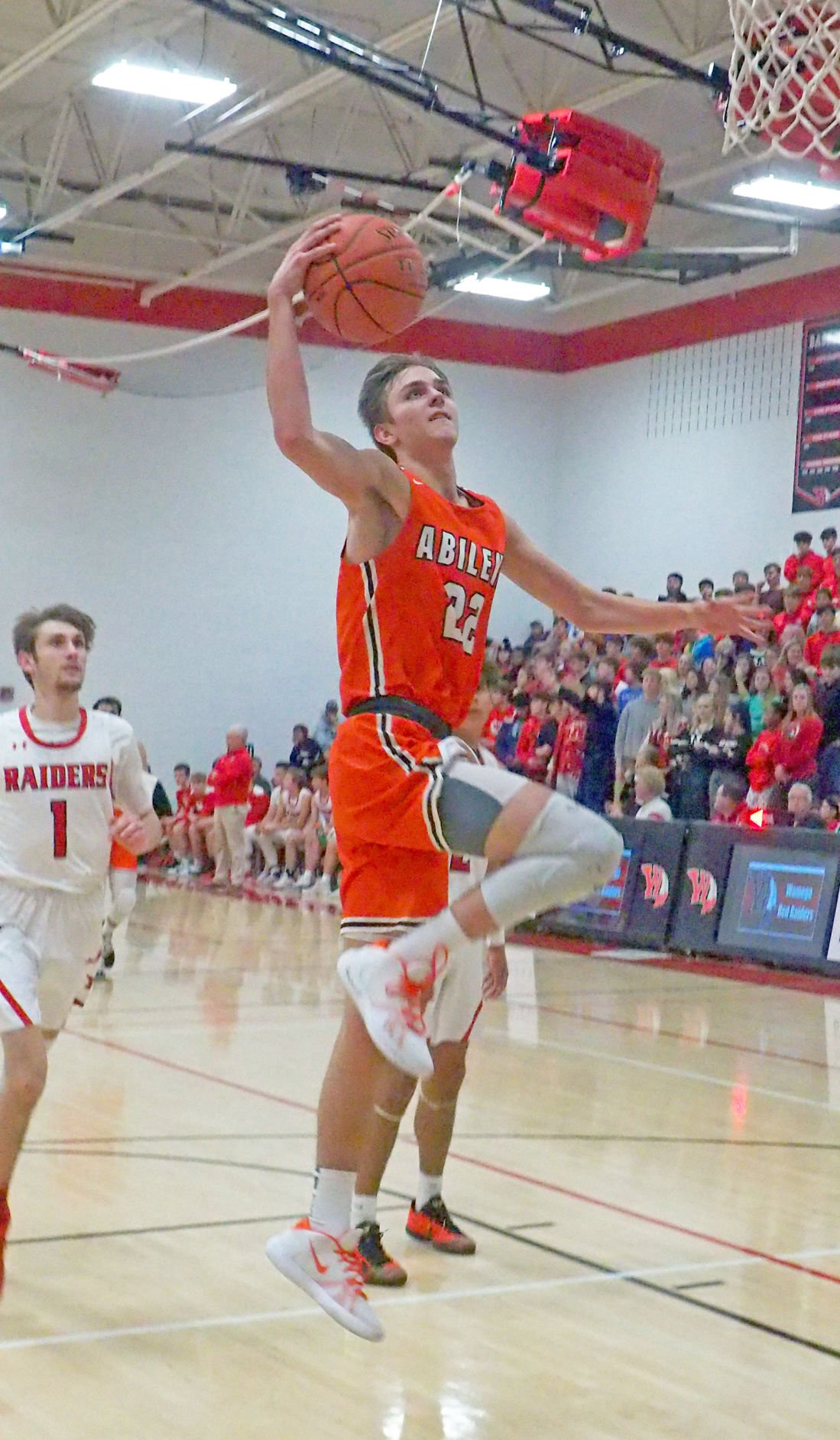 WAMEGO – Playing his best game of the season, maybe his career, Abilene senior point guard Travis Beetch scored a career high 28 points to lead the Cowboys in a two-overtime come from behind win at Wamego Tuesday night.

Beetch did almost everything he could do to get the Cowboys a win and a North Central Kansas League road win over the Red Raiders 71-70 in two-overtimes. Beetch led all scorers with 28 but it wasn’t just his play at the basket that came up big the Cowboys. He had multiple steals that resulted in Abilene buckets particularly in the second half and during the extra eight minutes of action to end the contest. He also handed out a team leading number of assists that resulted in scores.

“Travis had some really good plays tonight,” Abilene head coach Terry Taylor said. “Can’t fault our kids’ effort tonight. We battled. Down six at half, down six going to the fourth and we were down 12 at one point in the third quarter. We weren’t competing at that particular minute and we called a time out and we talked about growing up and competing. They responded and had a good run at the end of the third to get back in the game.”

Abilene trailed by a many as 12 points midway through the third quarter before the Cowboys went on a 6-0 run to end the period and pull within six at 34-40. Junior Avery Bryson got a jumper as did sophomore Kaleb Becker and Beetch ended the scoring in the third with an attempt at an old fashioned three-point play. After missing the free throw, Abilene went into the fourth down six.

Beetch and junior guard Josh Stuber sparked the Cowboys scoring in the opening of the fourth to keep even with the Raiders. Stuber drained a three at the 4:15 mark the brought the Cowboys within three at 45-48.

Wamego’s Tabor Vetter popped a trey for the Raiders but Bryson and Beetch then pushed the Cowboys to a brief 53-51 lead with 2:20 remaining in regulation. The Raiders’ Tanner Hecht hit a pair from the line for a tie at 53-53 with just under two minutes remaining.

“In the fourth we kept nibbling away at it and really had a chance to win it at the free-throw line in regulation and in both overtime periods. We didn’t shoot free throws very well tonight,” Taylor said. “We missed four in a row to end the first overtime and the Kaden Coup came in the second overtime to get those two big shots. I am so proud of him. He is a tough kid and I thought he had a chance to make them and he did. Really proud of Kaden for that. He had quality minutes tonight.”

Making free throws at the most important time was going to be key for the Cowboy win down the stretch of regulation and in the two overtime periods. Abilene had a miserable night at the line making only eight of 20 shots. They went zero for three in the fourth period alone but the contest was tied. They then went zero for five in the first four-minute overtime and it came down to a four for four performance in the second overtime. Becker had two to push Abilene ahead 67-65 at the 1:50 mark but the unsung hero of the night was junior Kaden Coup, who had played multiple minutes off the bench for Abilene but had ice in his veins from the charity line. Coup had two makes in the second period but with the Cowboys trailing 69-70 with 5.2 seconds left; Coup was fouled attempting a game winning shot. Strolling to the free-throw line he calmly sank both shots for the 71-70 win. Wamego got off a late shot attempt at the buzzer but it bounded off the rim into the Cowboys hands.

“We were in foul trouble late and felt like we weren’t getting very many breaks on the calls tonight,” Taylor said. “But it was a great high school basketball game. Exciting game for the fans. You could never think the game was over until it actually was.”

Beetch had given the Cowboys the 69-68 lead with 38 seconds on the clock with a driving layup to the basket but the Raiders were able to answer back with a bucket from senior Clay Patterson with 10.9 seconds left. The Cowboys got the ball passed the midcourt stripe and quickly called time out. Coup got off a potential game winner but was fouled on the attempt. His two free throws gave the Cowboys the tie and the win.

Beetch had given Abilene an early 6-1 lead in the opening eight minutes before picking up two quick fouls. He had to sit most of the first period and during that time Wamego sprinted to an 11-9 lead after one. Beetch did return in the second quarter for Abilene and had a couple of buckets but Wamego maintained a four-point lead at half time 24-20. Wamego responded with a 16-8 run to open the third period to give them the 12 point lead at 40-28 before the Cowboys responded with the comeback rally to tie at the end of regulation.

Becker put in 13 points for Abilene while Bryson added 12. Stuber scored nine for the Cowboys while Coup ended with six big points. Hecht led the Raiders with 16 followed by Vetter at 14 while Patterson put in 10 points and senior Calvin Baker shot in three treys and ended with 11 points.

Wamego shot in nine treys on the night and probably the biggest make came from sophomore Burk Springer with a sling shot at the buzzer to end the first overtime period with a 63-63 tie.

“This was a big win for the team,” Taylor said. “We didn’t play really well but our effort was good. We were 32% from the field in the first half and we missed layups and shots we normally make. Their kids played hard and made some shots tonight. This was one of Wamego’s better games this year. We have to build on this and move forward. Obviously two more games this week and if we could get wins out of them, it will put us in great position for the league race.”

Abilene improves to 4-2 on the season and it has a 3-0 mark in the conference. The Cowboys are scheduled to host Clay Center (0-6) Friday night and then play a make-up game with Marysville (5-1) on Saturday in Abilene. Marysville was scheduled to play Concordia last night.