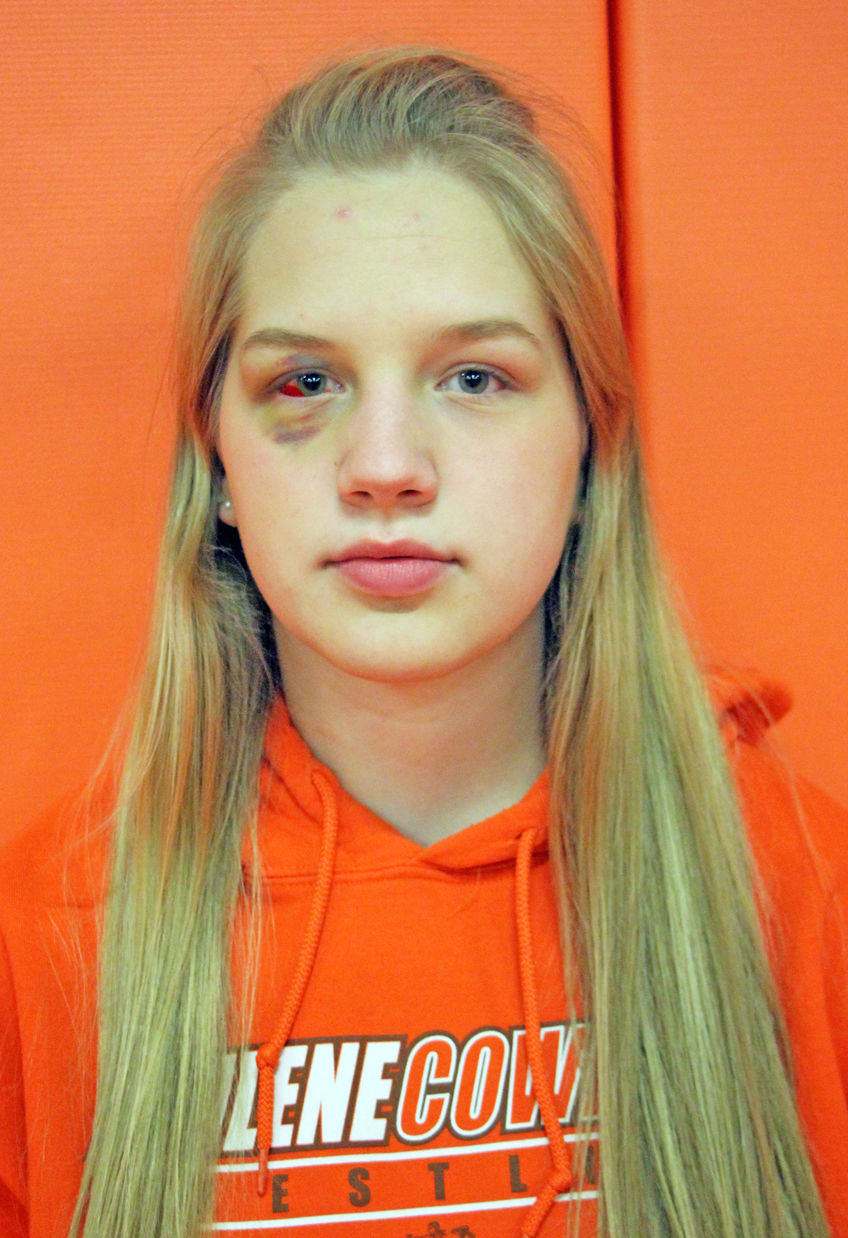 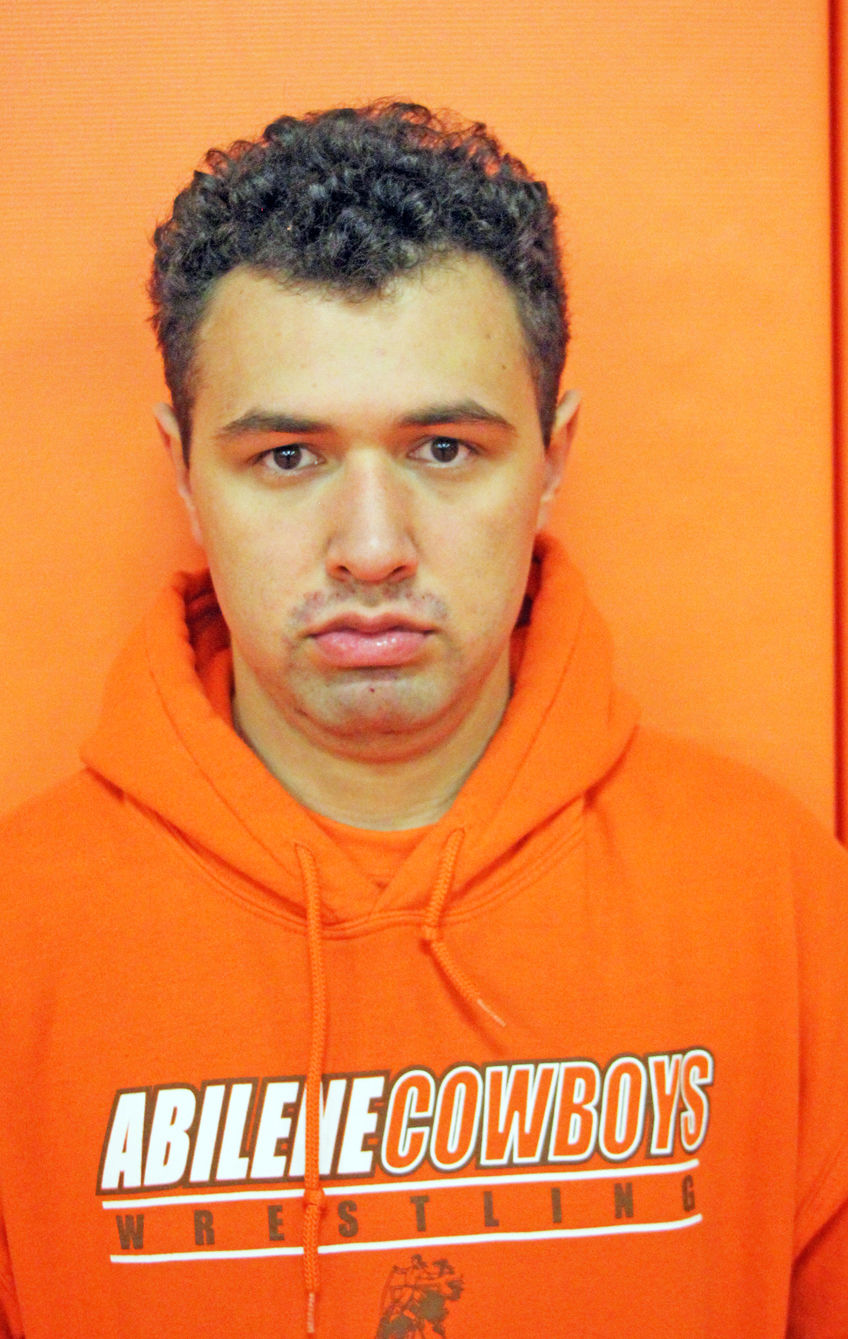 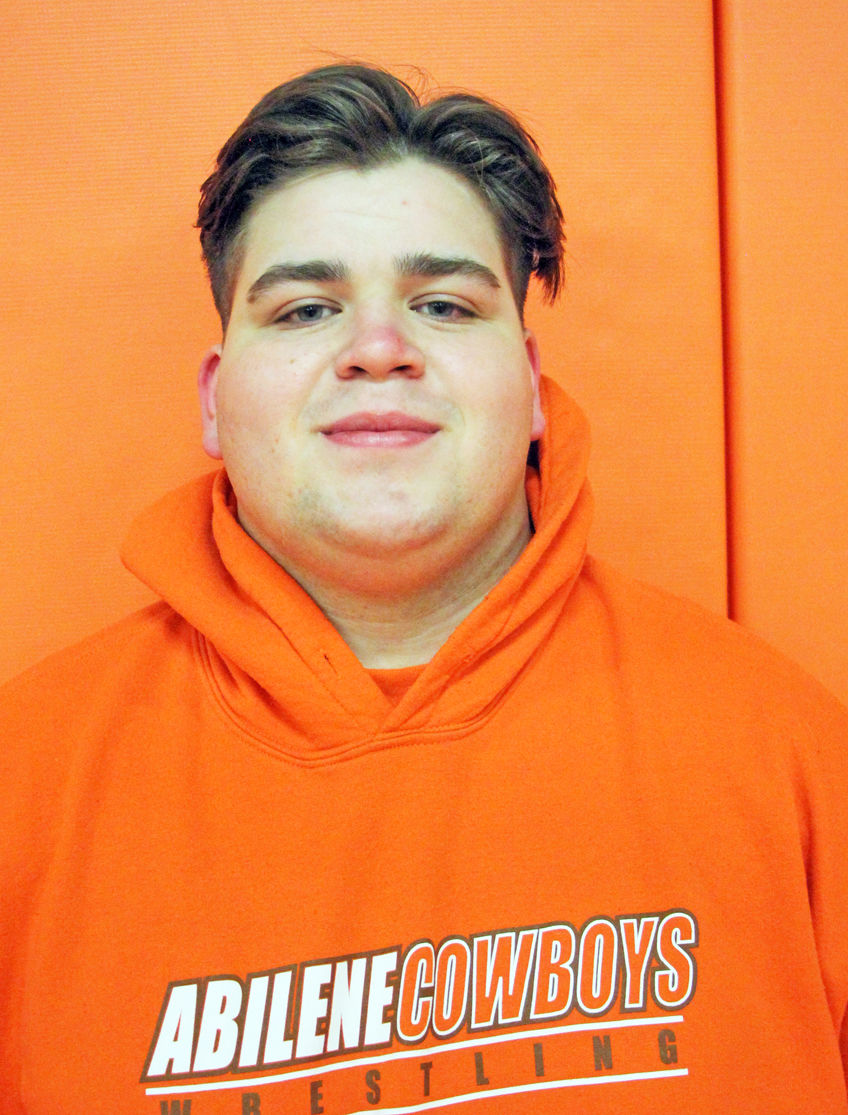 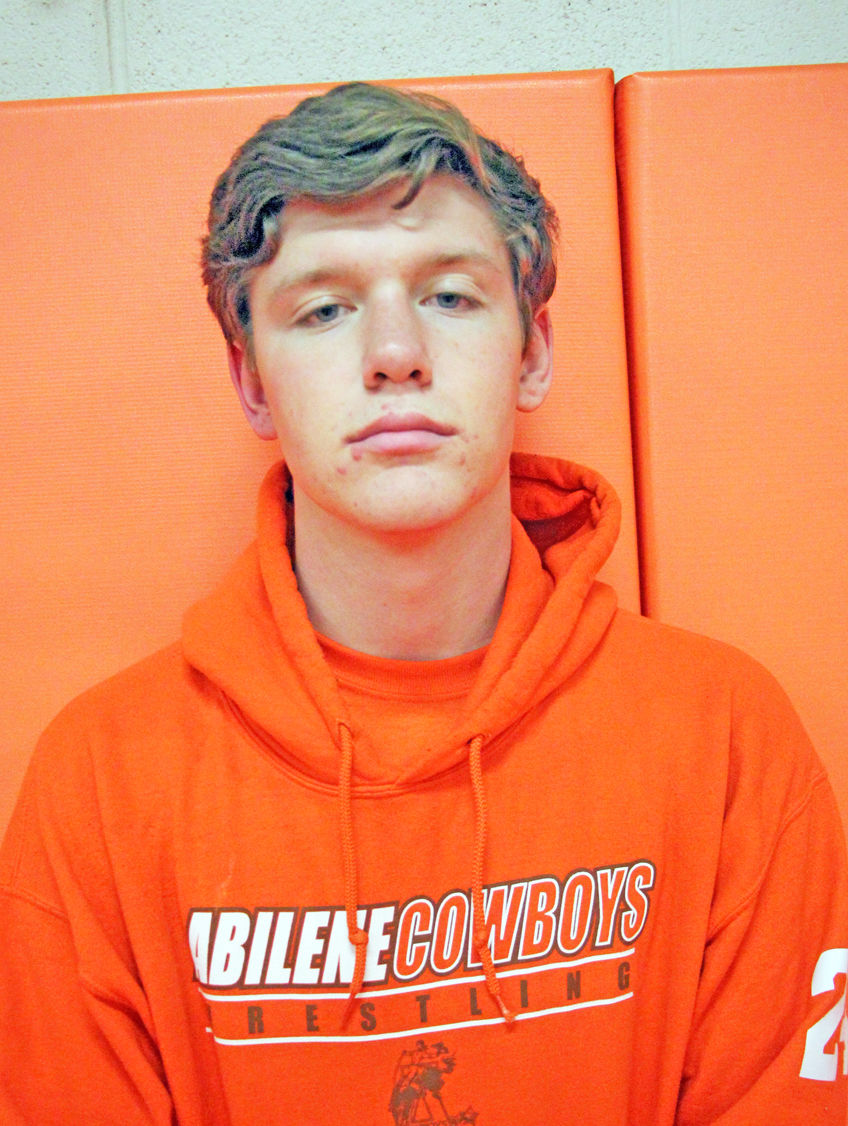 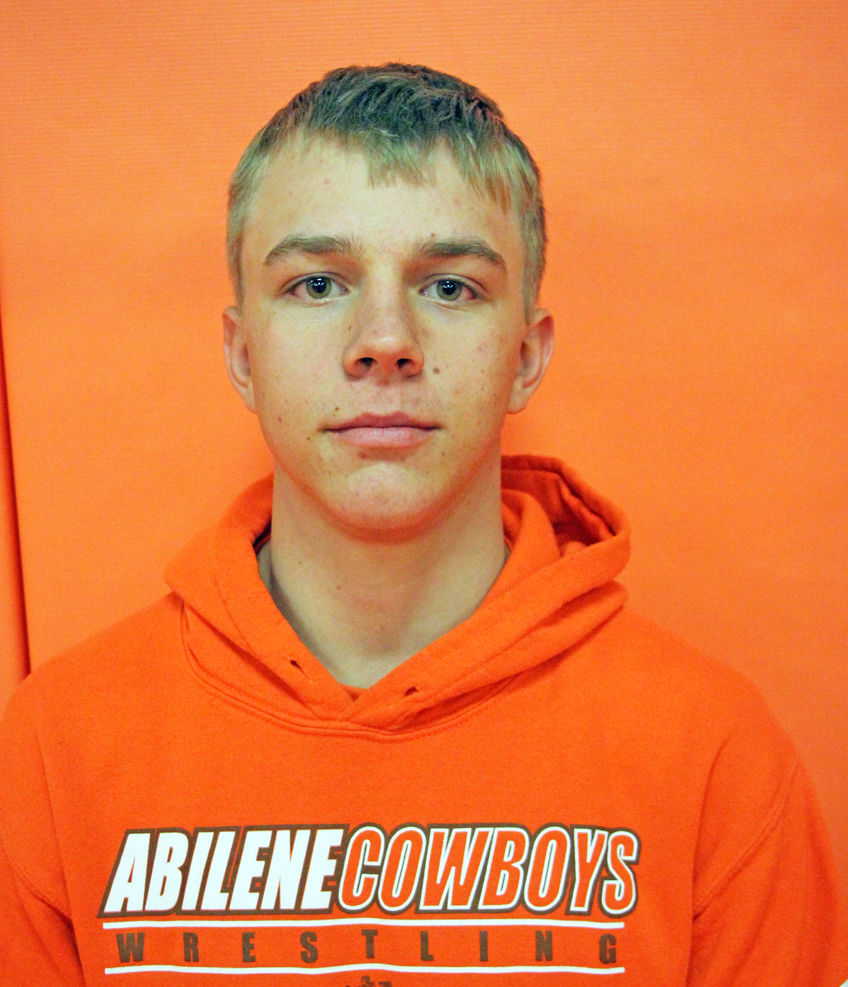 It was senior night for the Abilene Cowboy wrestling team and with two matches remaining the Cowboys held a 32-26 lead over the always-tough Clay Center Tigers.

The dual came down to the final two weights of the match to determine the outcome. Stepping into the center circle for the Tigers at 220 pounds was junior Keegan McDonald with a record of 22-14. He was going to square off with Abilene junior Brandon Parker (16-13). The match was tightly fought and ended with a 3-2 decision by McDonald to give the Tigers 29 points heading to the final match.

In the 285-pound class, Clay Center’s Logan McDonald (26-6) took on Cowboy senior Adam Henely (15-12). McDonald had recently finished fifth at the Beloit Invitational with Henely taking sixth place. Thursday, McDonald got a takedown early in the first period and worked it into a win by pin. That win gave the Tigers six team points enough to jump ahead for the win at 35-32.

“Sometimes it looks that way at the end of the match and tonight it was that way,” Abilene head coach James Stout said about the last two matches. “They have been heroes for us in other duals and that is kind of the curse of being a heavyweight at times. It is also the gift in other times. You are either a hero or down in the dumps a little bit. Those guys feel bad about those matches and hopefully they’ll come back and learn something from them and get them to higher places later in the year.

“Adam and Logan McDonald have been at each other for a while now,” Stout added. “Last year we had the better of the two matchups and this year it’s the other way around. Hopefully we can turn that trend when it counts at regional.”

Both head coaches of the two North Central Kansas League rivals worked at managing their specific lineups during the match by trying to create better matches that might result in team points for the school. This meant that a few wrestlers wrestled up a weight class from their normal check in weight.

Clay Center head coach Brandon Pigorsch made an immediate switch at 106/113 to open the match. Originally the Tigers had senior Rhett Koppes (28-1) slotted at 106 with the team being open at 113. At the time of the 106-match announcement, Clay Center pulled Koppes to wrestle at 113 instead. Abilene’s Christopher McClanahan (19-11) picked up the win by forfeit at 106 and Koppes the number two-ranked Class 4A wrestler in the state moved up to face Abilene junior Skyleigh Pflaster. Koppes finished with a pin that resulted in a tie score at 6-6 after two matches.

Next up, the Tigers sent sophomore Garrett Kalivoda (24-10) to face Abilene sophomore Kaleb Stroda (20-7) at 126. Stroda had gotten the better of the two at the Beloit Invitational but Thursday it came down to Kalivoda getting a take down in overtime for a two-point, 8-6 decision.

At 126, Abilene’s Dayton Wuthnow once again wrestled for the side lined senior leader of the team Will Stroda (27-4). The freshman wrestled well enough to get a pin over freshman Wyatt Varner.

Abilene head coach Stout made his first switch of the match when he sent sophomore Javin Welsh to wrestle at 132 instead of 138. Welsh (11-15) faced off against the Tiger’s Parker Tholstrup. Tholstrup is the other ranked Clay Center wrestler as he is currently number four at 126. This was one of the most exciting matches of the night with Tholstrup taking an 8-7 decision for the win. His win tied the team score at 12-12.

Freshman Braden Wilson (17-14) wrestled up a weight for the Cowboys and earned a 10-0 major decision win against Clay Center freshman Isaiah Johnson at 138.

Abilene senior Jackson Randles (18-16) won his final match at 145 on the Cowboy mat with a second period ending pin against Alek Tipswood (2-8).

Stout had sophomore Lyndsey Buechman represent the Cowboys at 182 to claim an open forfeit and give Abilene six points to give them back the lead at 28-26.

The Cowboys called on senior Colby Mohr (23-9) to move up to wrestle 195 and Mohr provided an 11-2 major decision win to increase the Abilene lead to 32-26 before the final two matches.

The Cowboys dropped their second close NCKL dual and will finish the regular season NCKL race a week from last night at Chapman. Before they head to Phillipsburg on Saturday, as all squad members will be in action at the final tournament of the regular season.

“Next week at Chapman it wraps up our varsity regular season,” Stout said, “We’ve had a good season so far and we need to finish strong next Thursday night at Chapman and have that momentum going into the girls and boys regionals.”

Regional action begins with Abilene’s three female wrestlers heading to McPherson for the first ever KSHSAA Girls Regional Tournament with qualifiers going to the first state tournament in Salina on Feb. 27.

The Cowboy varsity will wrestle at the Concordia Regional on Feb. 21 and 22. The Class 4A Boys State meet is planned for Feb. 28 and 29 in Salina.