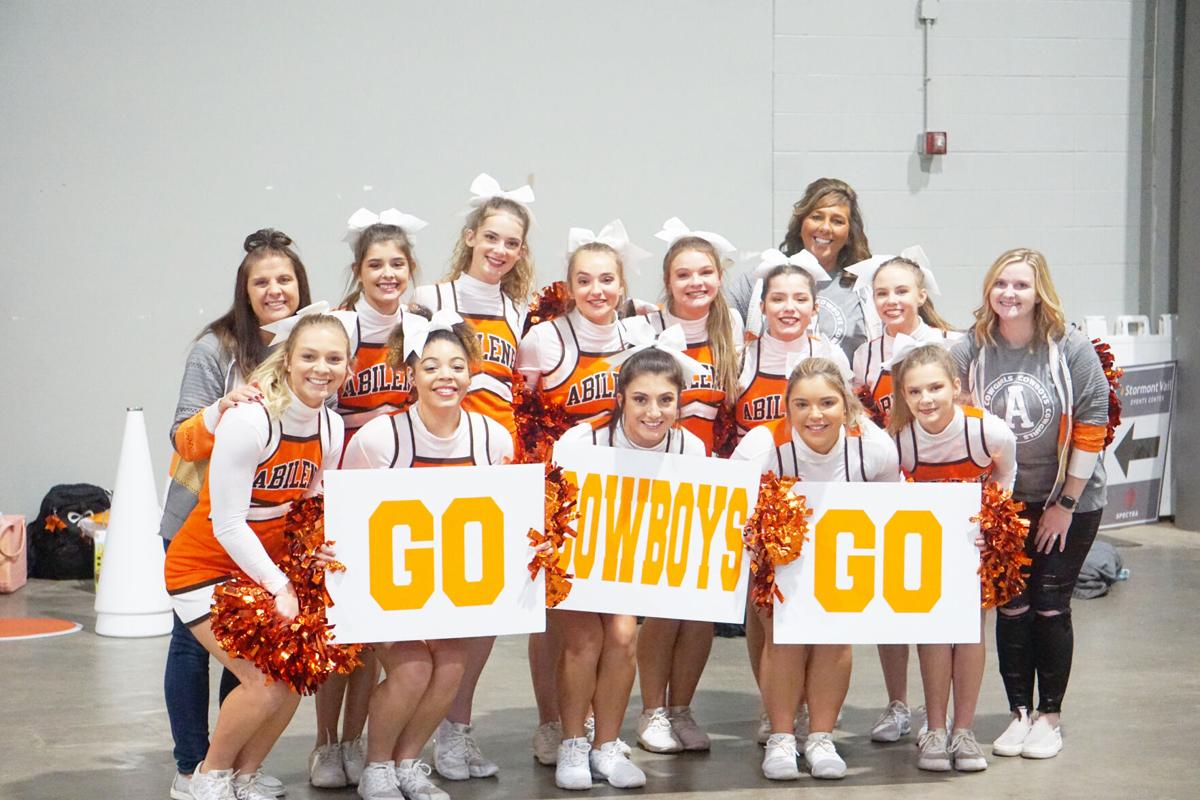 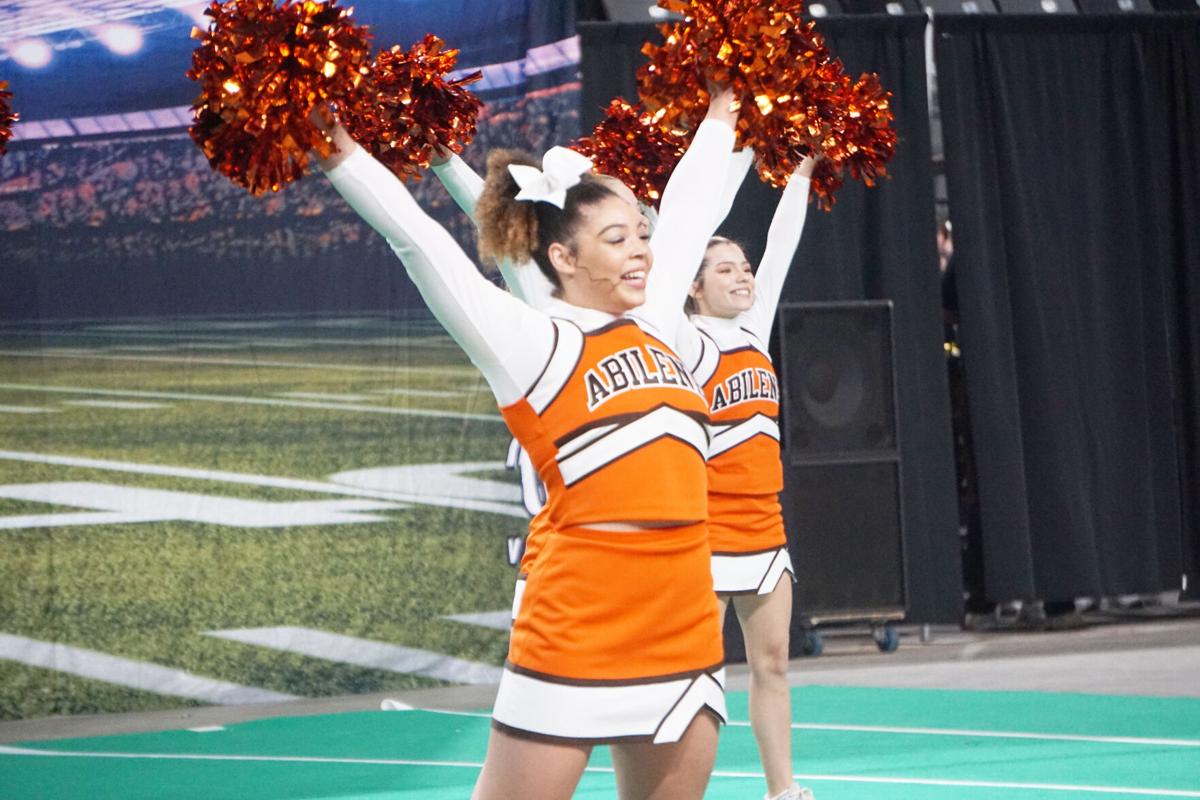 The cheer team seniors, like Anna Shafer (pictured above) brought their Cowboy spirit to their last cheer competition. 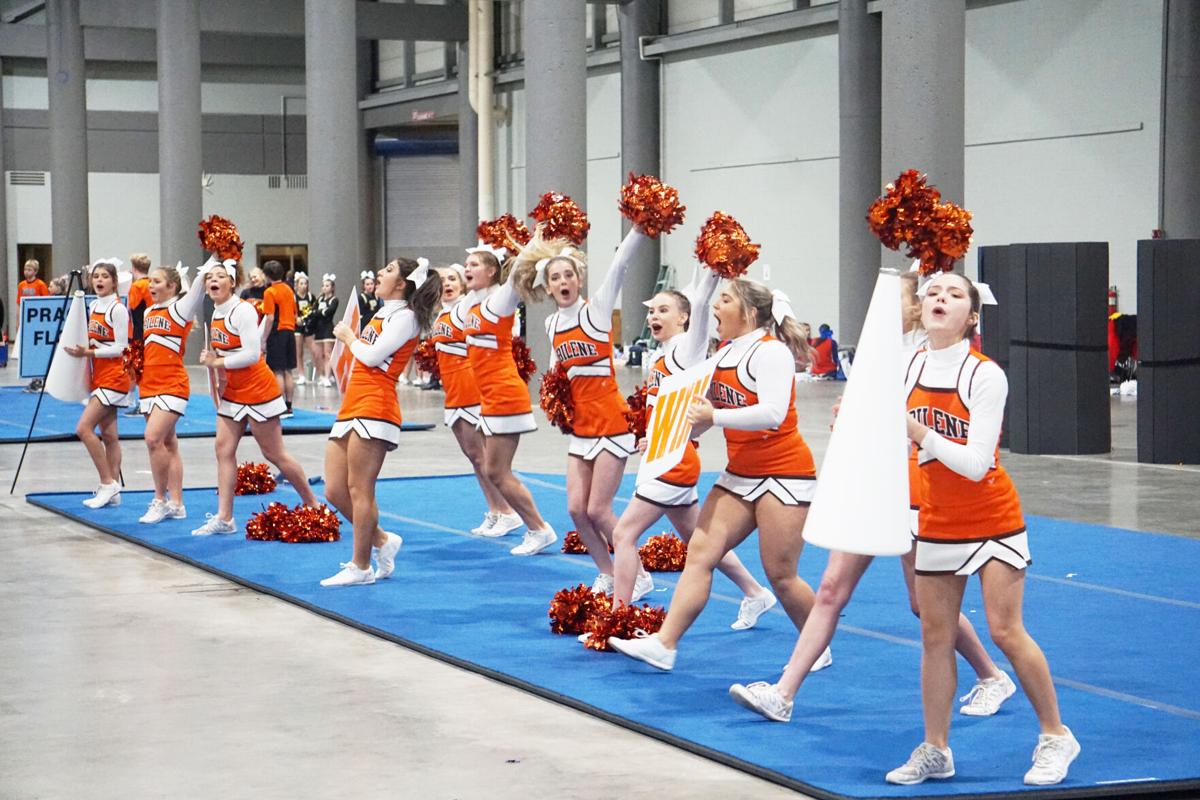 AHS Cheer Team used their practice mat time to show off their chants and yells to get the crowd cheering for the cowboys.

The cheer team seniors, like Anna Shafer (pictured above) brought their Cowboy spirit to their last cheer competition.

AHS Cheer Team used their practice mat time to show off their chants and yells to get the crowd cheering for the cowboys.

Following their second place win at the 2020 KHSAA Game Day Spirit Showcase, Abilene High School cheer team brought all their spirit to Topeka on Saturday to compete against other division 4A schools.

“In the past, we brought the allotted amount which you can put 10 on mat and we just decided to make it more competitive,” Funston said.

“So based on camp, what their performances at camp are, their commitment, their ability, their skill level: we put it all together and they get an invitation, they find out in September, if they got an invitation to be on the state team…once they find out, they’re asked to be on the state team, they really have to evaluate and make the commitment.”

For the five senior cheerleaders - Anna Shafer, Jessa Howard, Kayce Reiff, Allie Cross and Amelia Arevalo - making the decision to commit to the competition team came with the understanding that Saturday will be their last day competing as cheerleaders.

All the seniors on the competition team decided that after graduation they will be putting down their poms poms for the future.

Even with the end near, the girls were confident in the team’s abilities and their bonding with each other on and off the mats.

“We’ve had more bonding as a team, I think,” Shafer added. “By competition wise, I think we’ve gotten a lot better on what the judges are asking for and just bringing our personality and school spirit.”

“I think we have tried really hard to kind of see how other people can be and then kind of take that on our own team and put that into our work and work really hard to get here,” Cross said.

“I’m very proud of what they did today,” Funston said.

According to Funston, the goal for next year’s competition is to look over scores and learn, but also to fill the pom poms left behind by her seniors. Funston couldn’t be more proud of her seniors that brought all their spirit to their last high school cheer competition on Saturday.

“They have been a great class,” Funston said. “Their skill level is top notch, their attitude, their work ethic, they come to every practice and they are so coachable. They want to get better, they want to learn, we’re going to have to fill a huge gap when those girls leave. It’s going to be really difficult, but they are setting a great example for the underclassmen. On the court, they’re awesome athletes. Off the court, they’re awesome girls. They are very respectful of the coaches of our program and they just represent Abilene cheer really well.”