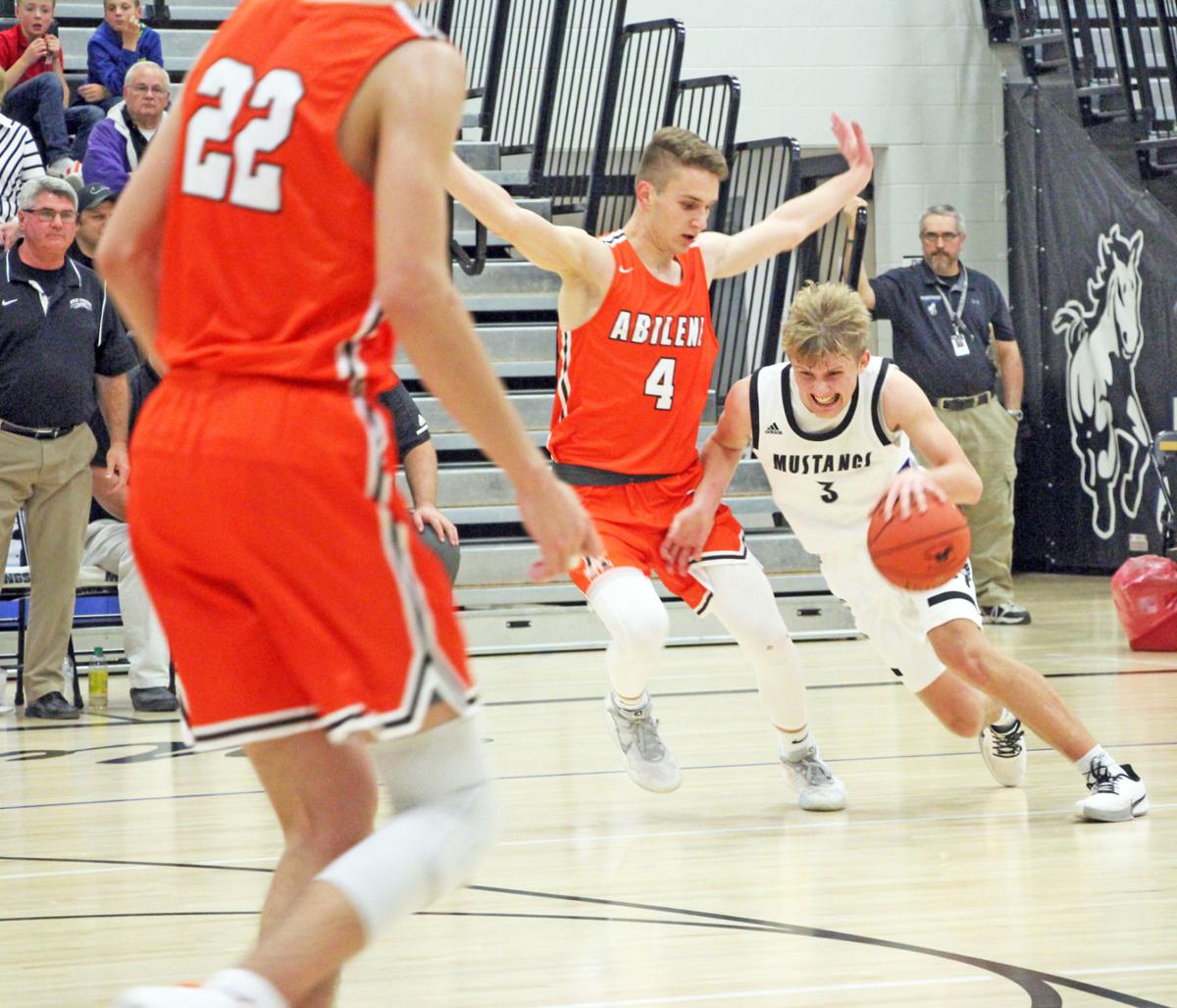 Rock Creek junior guard Dawson Zenger (3) drives around Abilene’s Josh Stuber (4) on his way to the bucket as the Mustangs rallied for a 61-56 win over the Cowboys Tuesday. 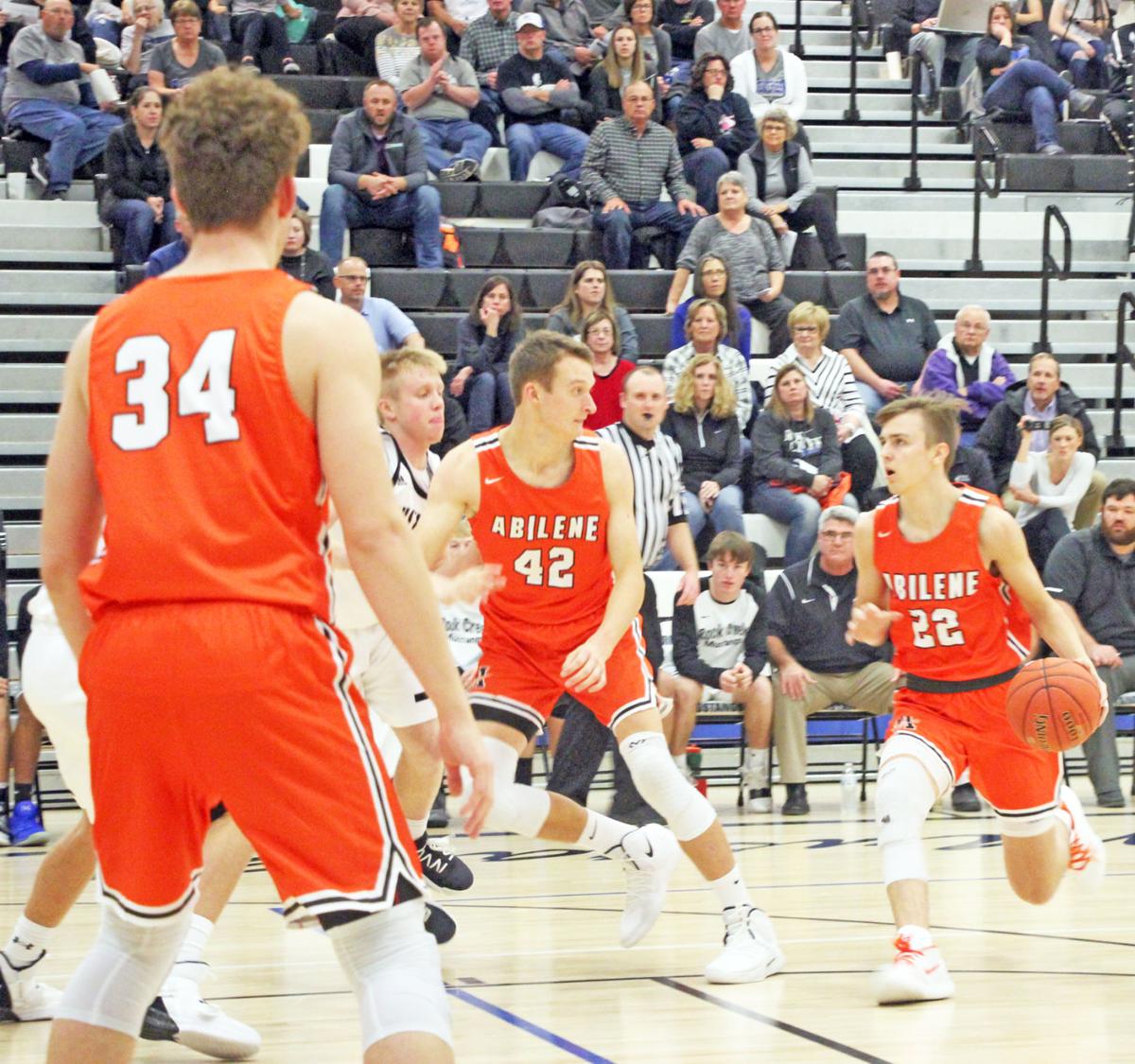 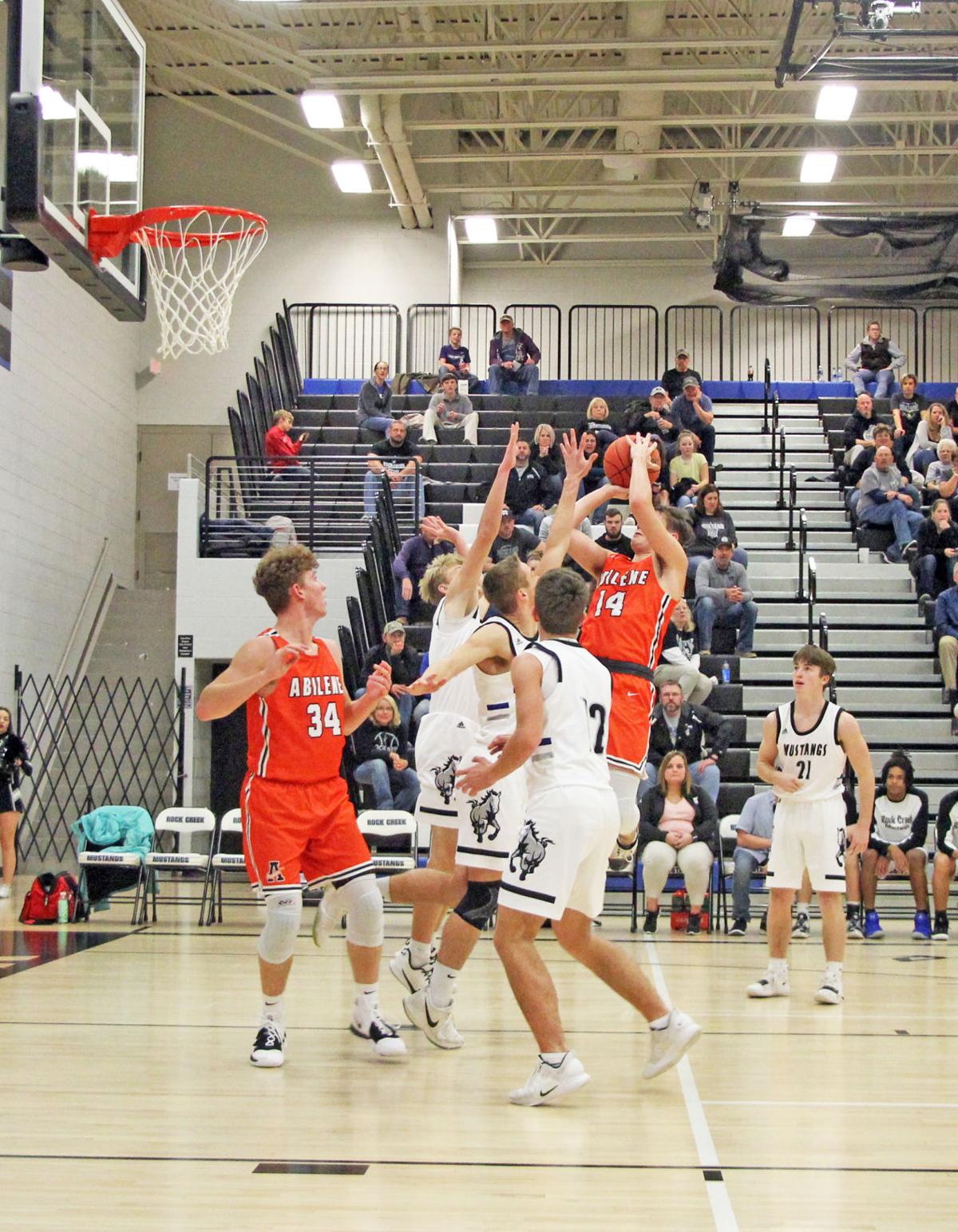 Rock Creek junior guard Dawson Zenger (3) drives around Abilene’s Josh Stuber (4) on his way to the bucket as the Mustangs rallied for a 61-56 win over the Cowboys Tuesday.

ST. GEORGE – The Rock Creek Mustangs improved to 2-0 on the season with a fourth quarter rally to upend the seventh ranked Abilene Cowboys 61-56 Tuesday night at Rock Creek High School.

Trailing 38-46 heading into the final eight minutes, pre-season all-state junior guard Dawson Zenger scored 13 of his game high 31 points to lead the Mustangs in the upset win. Rock Creek had not beaten Abilene since 2009.

Zenger, 6-1 junior, scored a game high 31 points against the 1-1 Cowboys. He poured in 39 points in the win over Clay Center on Friday night.

The Cowboys battled all night against the athletic Mustangs and pulled ahead 30-28 at halftime after out scoring Rock Creek 17-10 in the second quarter. Abilene kept the pressure on to begin the third quarter and created another six-point advantage scoring 16-10 in the third period.

“We had an eight-point lead at one point, the next thing we are down four and we are turning it over and they are making plays on offense and we fouled way too much tonight,” Abilene head coach Terry Taylor said. “They’re a good team. They are playing well right now. When you have a player that can score at will like that when they need two points they can go to him. That’s huge. Right now we don’t have that.”

Junior guard Josh Stuber got a bucket for the Cowboys for a 50-50 tie less than a minute later, but it was the last time the Cowboys had the lead or was tied. Zenger hit two quick buckets to offset a nice play by Abilene’s Travis Beetch as the Mustangs went ahead 56-53 with just over two minutes left in the game.

Beetch led all Abilene scorers with 22 points in the game while sophomore Kaleb Becker added 10.

“They are a team. We knew that was a very good free-throw shooting team and they did great tonight,” Taylor said. “Disappointing that we kept fouling those guys. You can’t guard a free throw shooter. We don’t have a lot of offense in right now and we struggle to score ourselves at times. You give up 31 points to one player, which is not good team defense. We’ve got to grow up and learn some things. We will. The foul situation kind of messed up my rotation plans. Guys were in foul trouble and I couldn’t put them back in. That happened to Grant (Heintz) right off the bat to begin the game and then Matt (Davis).”

The Cowboys had a mental lapse during the rally by the Mustangs as they had committed four turnovers including four silly fouls during that three-minute rally by Rock Creek. Abilene also missed five of six free throws in that time span.

Beetch tied the game for the first time in the game at the 3:55 mark of the second period and less than 20 seconds later gave Abilene its first lead with a strong three-point shot making the score Cowboys 24 to 21. Rock Creek trailed from that point until 5:06 showed on the fourth quarter scoreboard with a 48 to 48 tie after four free throws by Zenger.

The Cowboys know they let this game escape them and now they must get ready for a very good Augusta team that comes to Abilene on Friday.

“We’ve got to be smarter ourselves,” Taylor said. “To be out rebounded by these guys and send them to the free-throw line that many times (18-27) is unacceptable. We’ve got to better as a coaching staff to prepare ourselves. Looking down the road we have a very good team on Friday. Hopefully we don’t allow one loss to turn into two. Its just one game and it’s early in the season but we will have our hands full Friday night.”