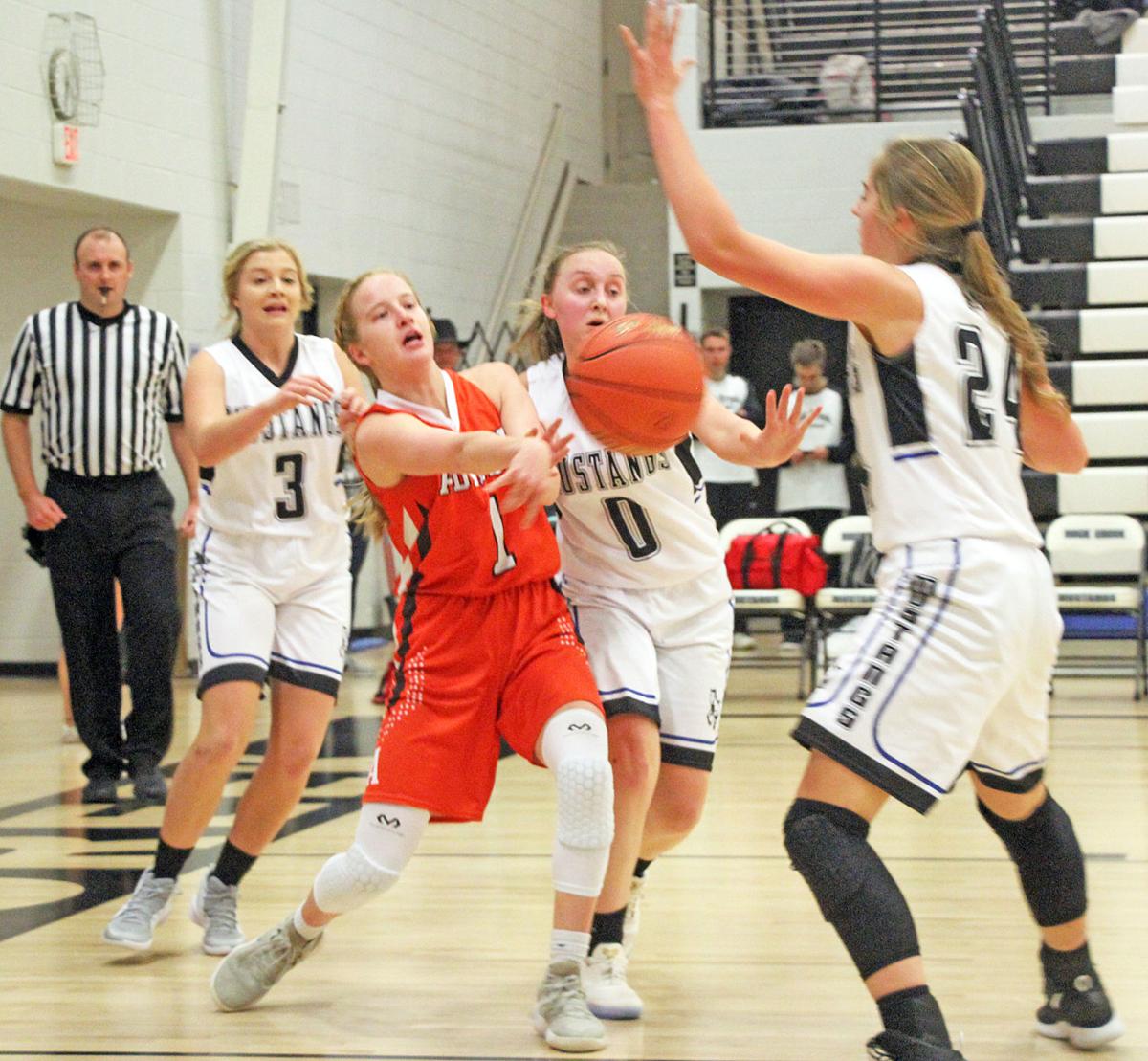 Abilene senior Beth Holmes (1) tries to get a pass off against a handful of Lady Mustangs Tuesday as the Cowgirls fell 42-29 at Rock Creek Tuesday evening. 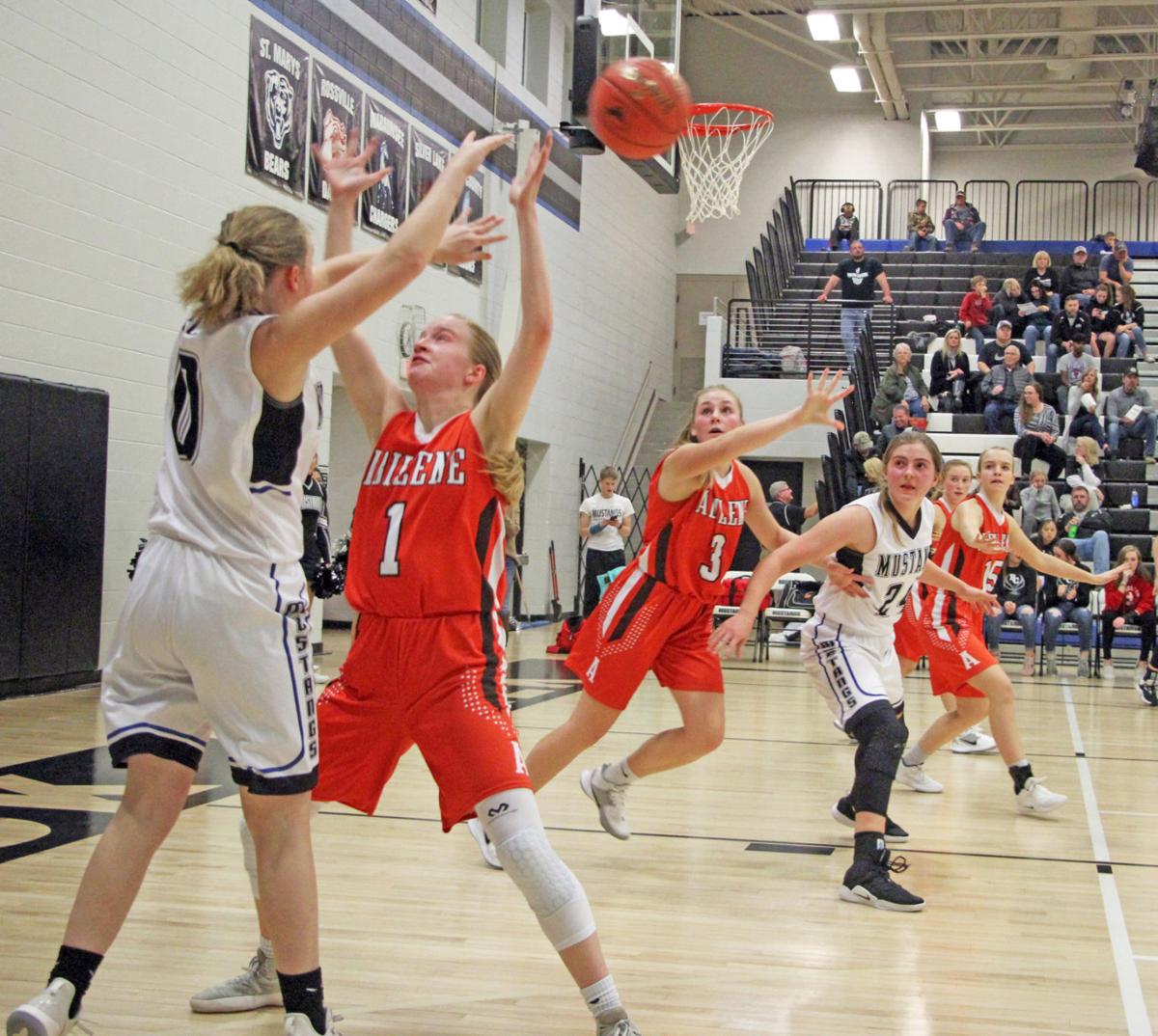 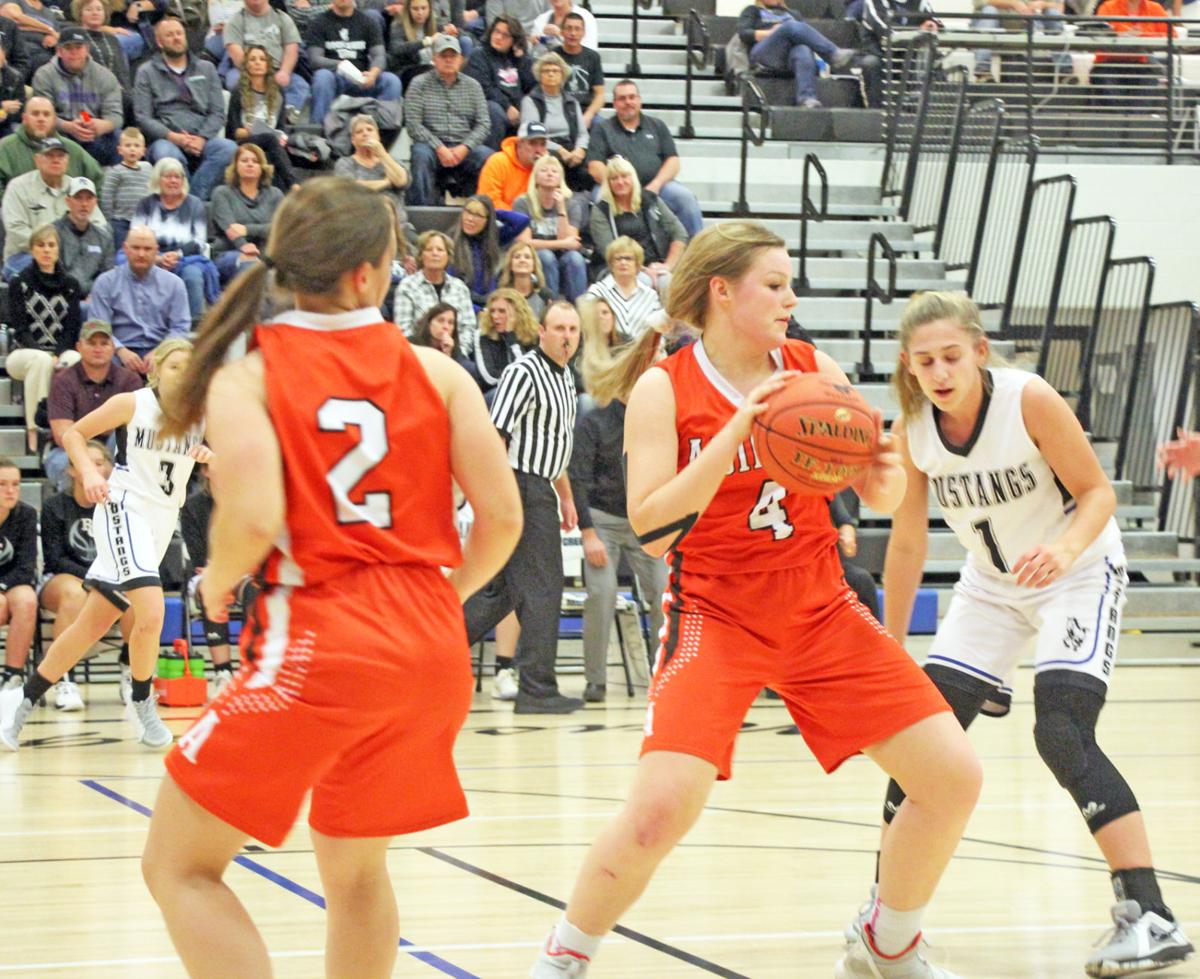 Abilene senior Beth Holmes (1) tries to get a pass off against a handful of Lady Mustangs Tuesday as the Cowgirls fell 42-29 at Rock Creek Tuesday evening.

The Cowgirls stayed with the Lady Mustangs through the first quarter but went through a stretch of nearly two periods where it was difficult to score against the Class 3A Lady Mustangs.

While the Cowgirls were struggling with passing the ball inside and then had uncharacteristically 26 turnovers on the night, the Lady Mustangs found their offense, including three-point shooting that had been absent in their Friday night loss to Clay Center.

“The first half was a struggle for us to get the ball inside,” Abilene head coach Mike Liby said. “We didn’t pass well and they were really more physical than we thought they might be. We didn’t handle the pressure of the moment very well. I thought the second half we came out and played a little better. We made a little defensive adjustment and that seemed to help to slow down their offense a little bit. We knew they could shoot the three ball and that is why I couldn’t get to a zone defense against them. We like to play zone but I knew we had to guard the line and they shot lights out tonight and we really struggled shooting.”

Leading by one after the first eight minutes, Rock Creek went on to out score Abilene 29 – 8 over the next two quarters to take a 41-19 advantage into the final period. Senior Jade Vopat hit a buzzer beating trey to end the first period to keep the Cowgirls within one heading to the second quarter.

Rock Creek went on a 12-1 run to open the second quarter, as Abilene didn’t get its first field goal until Abi Lillard put in a shot with 2:17 left in the half. Senior Beth Holmes followed with her first trey of the game at the 1:49 mark. The Cowgirls didn’t score again until the 6:03 mark of the third period when Lillard got a shot to fall. That was the only bucket of the quarter for the hard luck shooting Cowgirls. The cold night of offense then prolonged until the 4:29 mark of the fourth quarter before they scored again when Holmes pumped in her second three of the night.

The fourth quarter saw the Cowgirls rally to outscore the Lady Mustangs 10-1 but by then the damage had been done and Abilene fell to 1-1 on the season. Abilene shot a dismal 29% from the field going nine of 28 on the night. Normally a good free throw shooting team, the Cowgirls struggled going 7 of 16 for 43%.

Lillard led the Cowgirls in scoring with 11 points while Holmes added nine. Jenna Hayes finished with five while Vopat added four to the Cowgirl total.

Lillard led the Cowgirls with six rebounds while Allison Libby and Hayes grabbed five each.

Rock Creek was led by 5-10 sophomore Grace Gehl with 17 points including a couple of treys. Her teammate, Lexi DeWeese, a 5-10 sophomore, added 10 points for the Lady Mustangs.

Abilene must do a fast turn around as it gets ready for the 10th ranked Augusta Orioles that come to Abilene on Friday.