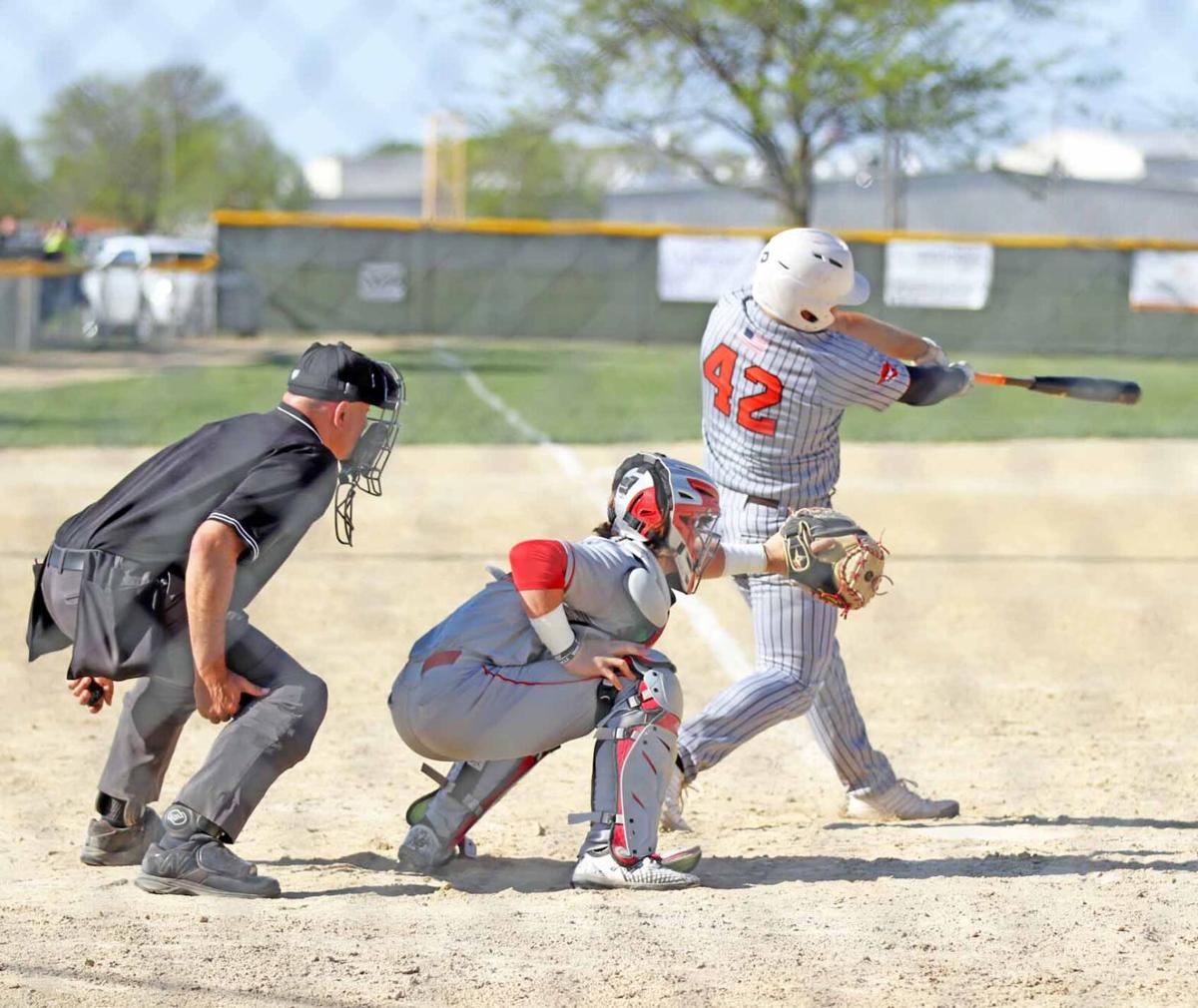 Senior Robbie Keener swings for a hit against Wamego Friday in Abilene. It was senior night for the Cowboys and Keener hit a solo home run in the second game to help lead Abilene to a 14-3 win. 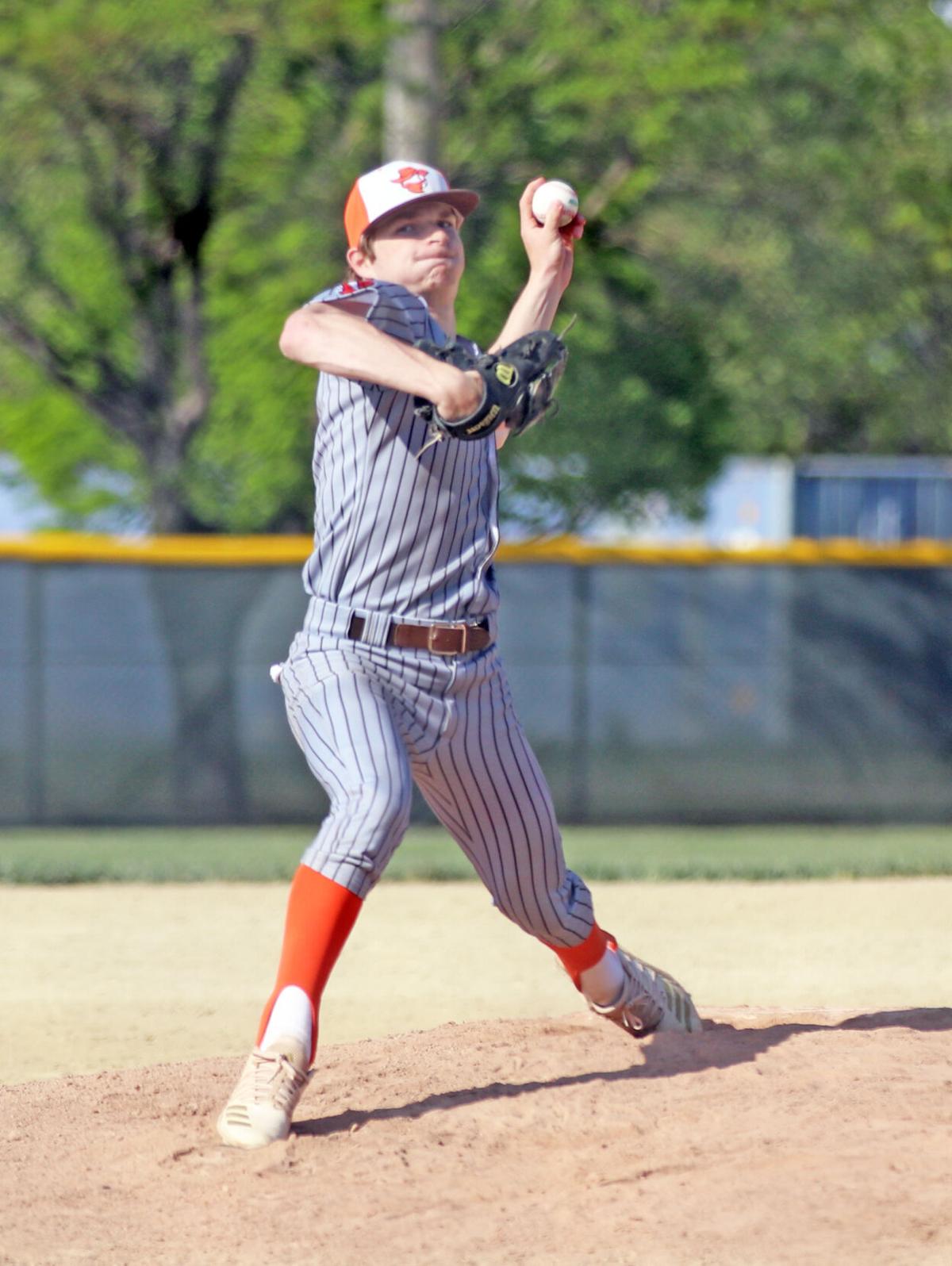 At right, fellow senior Kaden Coup pitches in relief in game one. When not on the mound, Coup ran everything down in center field for the Cowboys.

Senior Robbie Keener swings for a hit against Wamego Friday in Abilene. It was senior night for the Cowboys and Keener hit a solo home run in the second game to help lead Abilene to a 14-3 win.

At right, fellow senior Kaden Coup pitches in relief in game one. When not on the mound, Coup ran everything down in center field for the Cowboys.

It was senior night at Ted Power Field in Abilene as the Cowboy baseball team continued its fight for the 2021 North Central Kansas League title. Senior Robbie Keener homered in the second game and got the win on the hill to help lead Abilene to a 14-3 win in five innings over Wamego. The Red Raiders had won game one 7-6 for the split in Abilene.

Keener was one of three Cowboy batters that had multiple hits and RBI in the finale. Keener was three for three with three RBI and three runs scored. Freshman Zach Miller continued swinging a hot bat for the Cowboys by going three for three, driving in four and scoring twice. Junior Carter Taplin went two for four with a pair of doubles to drive in three. He also scored twice.

Keener hit a solo home run in the second inning of the second game to push the Cowboys ahead 6-2 going to the third. He also had a double in the game.

‘That was exciting,” Keener said. “Especially on senior night. I was super excited to start on the mound on senior night and having that big hit was just a dream come true. We were dialed in and ready to go in the second game so if we can start like that we should do really well. I think we will be ready for Clay because those are important game for us.”

The Cowboys jumped on Wamego by scoring five times in the bottom of the first after the Raiders had scored once in the top of the inning.

Abilene pushed across seven runs on five hits and five walks to increase the lead to 13-2. With one out, Miller singled and advanced to second on an error that enabled Michael McClanahan to be safe at first.

Wamego changed pitchers but the new hurler walked senior Ben Short to load the bases. The next two batters, Chris McClanahan and senior Kaden Coup drew TBI walks. Another change of pitcher and Taplin greets him with a two RBI double followed by an RBI single off the bat of Keener. Now with two outs, Miller bats for the second time in the inning and singles driving in two more runs.

The Cowboys added a single run in the fourth to be up 14-2. Wamego pushed across a run in the fifth for the 14-3 final.

“We hit really well in the second game,” Abilene head coach Travis Bartley said. “I think overall we played pretty well. Defense was shaky at times and we just have to clean that little bit of stuff up. The plan was to give Robbie four innings and then bring in Stocton. We got solid pitching out of both.”

On the mound, Keener tossed four innings allowing two unearned runs on twohits, walking three and striking out one. Freshman Stocton Timbrook tossed the fifth inning for the Cowboys allowing a run on one hit. He walked one and struck out two.

Down 7-0 in the first game, the Cowboys fought back to get within one but the Raiders Ryan Erickson pitched out of trouble in the fourth, fifth, sixth and seventh to get the victory for Wamego.

Michael McClanahan had a big night at the plate in game one with a pair of hits including an RBI double in the Cowboys come back. McClanahan also scored two runs. Short drove in a run during the Abilene rally. Miller and Timbrook had doubles in the Cowboys big fourth inning.

Freshman Kyson Becker started the first game for Abilene allowing seven runs on seven hits in two and two-thirds of innings. Taplin tossed one and one-third innings of one hit relief before Coup finished off the final three innings not allowing a hit or a run. He walked two and struck out three.

Chris McClanahan had an RBI hit for the Cowboys in the opener.

“The biggest thing that I was disappointed in tonight’s loss is that it took us three innings to get in the game,” Bartley said. “We can’t do that and have the success that we want going forward. We have to be ready to play at Clay. They’ll be ready for us because they are still in the league hunt and possibly a host location for regionals. Like I told them, we get one shot at regional’s, we can’t be lazy and take two or three innings to get into a game. The guys have been playing well lately and it is tough to stay locked in inning after inning. But you have to, especially this time of the year. I think the kids get that. We are still growing and maturing and I like where we are at right now. We are swinging the bats really well right now. As long as we keep pitching it and hitting like we are and catching the ball on defense, I like where we sit right now.”

“We knew Erickson was going to give us a good game on the mound,” Bartley added. “We have faced him before and we knew that he would be good, but I think we still got after him especially in the third inning.”

Wamego moves to 6-2 in league play and will finish with a double header at Chapman on Tuesday. Abilene improves to 7-1 in the conference and will play two at Clay Center on Friday. Clay Center is the third team involved in the league title race with a 4-2 mark. They have games with Concordia on Tuesday before facing Abilene on Friday.

Abilene is 10-8 on the year and their record after Friday’s game will be used in the Class 4A postseason. Regional baseball is scheduled to begin on Monday, May 17th and Tuesday, May 18th.