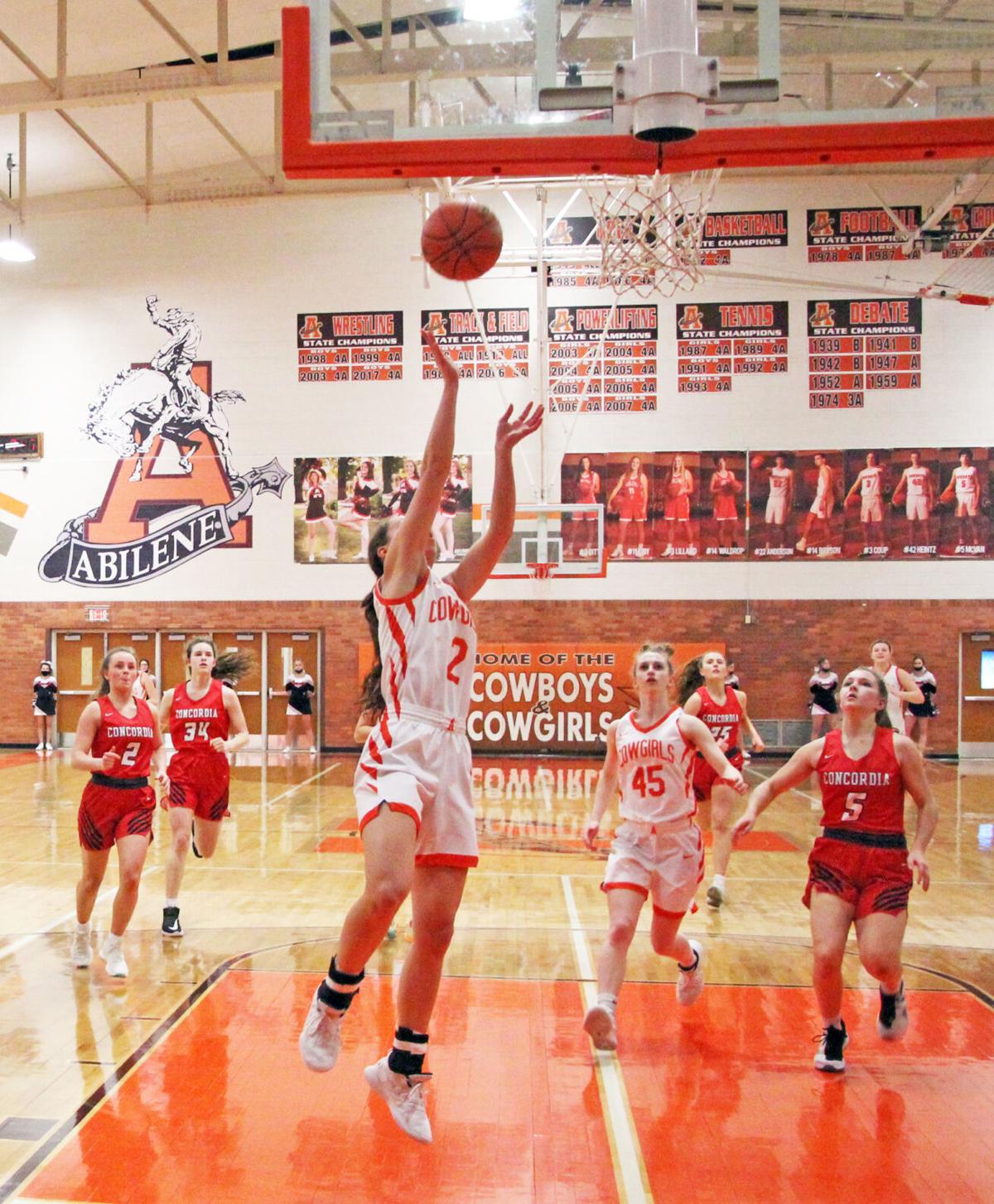 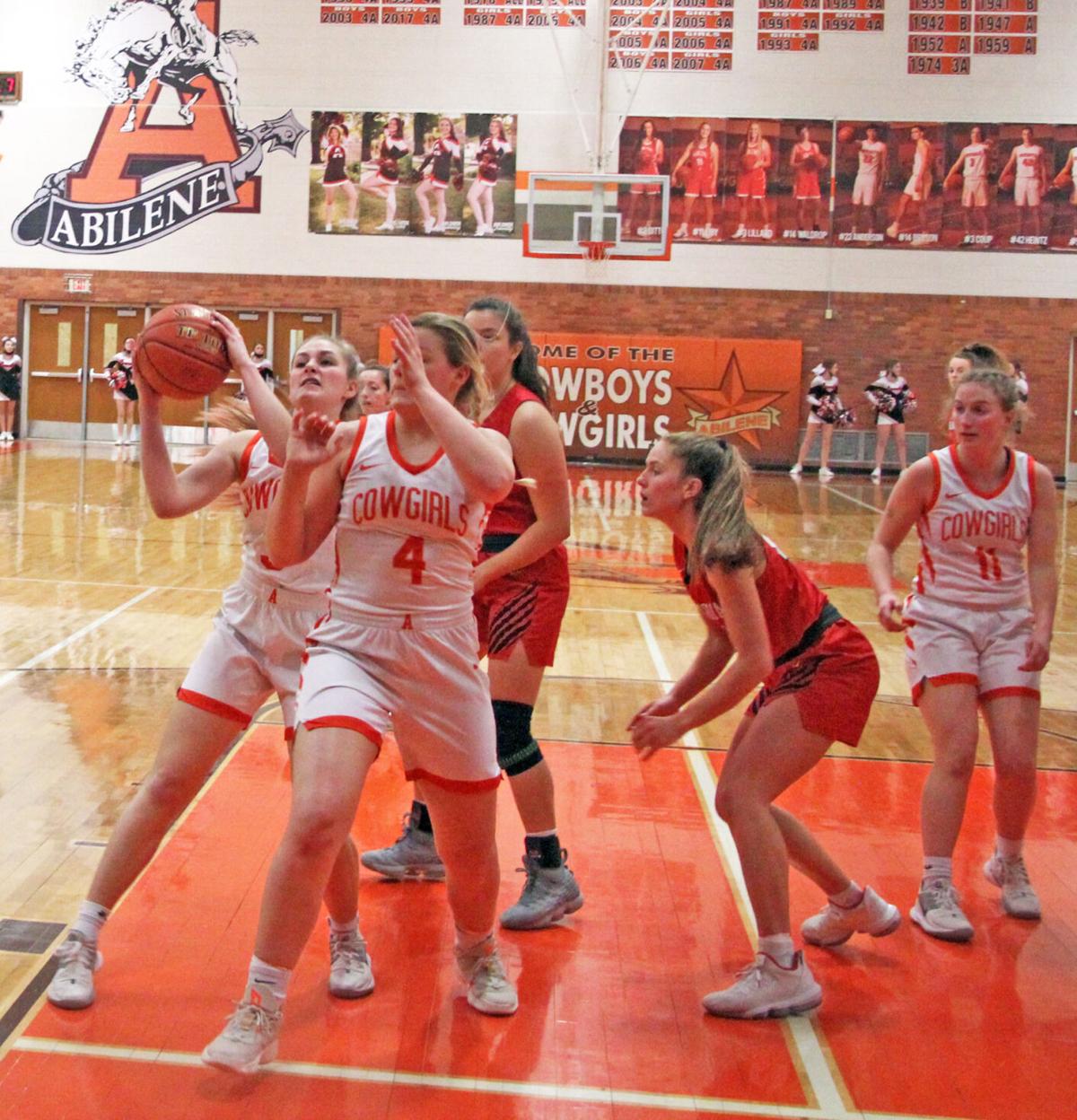 After defeating Chapman Tuesday night in Chapman, the Abilene Cowgirls completed the sweep of the week as they defeated the Concordia Lady Panthers 35-21 Thursday night in Abilene.

This Cowgirl team just keeps showing improvement and they continue to fight and play hard to the very end. Concordia won the first meeting back in December as they got a 43-36 overtime win on the Panthers’ home court.

Abilene broke away from its season ritual this year of starting out slowly jumping out to an 8-2 early lead. Senior Abi Lillard scored the first six Cowgirl points to go up 6-1. The Panthers added another free throw before junior Joy Clemence had a drive to the bucket for a layup that gave Abilene a 8-2 lead with two and one half minutes to play in period number one. Concordia finished off the period with baskets from seniors Terin Rundus and Chloe Conway.

“We were ready for them tonight,” Abilene head coach Mike Liby said. “I really didn’t think we were ready for the first time we played because we only had three practices after a little set back due to COVID. We wanted this game pretty bad, so the girls prepared for it well. These girls have always had the heart to play well and I think our chemistry is starting to blend together and we are playing well together. We are having less mistakes too.”

The Panthers tied the score at 8-8 to open the second period before Abilene’s Reagen Ditto hit one of two from the line to give the Cowgirls the lead, a lead they never gave up. Abilene ran up a 10-2 run to lead 19-10 with three minutes to play in the half. Freshman Sammy Stout hit a jumper to start the run that saw Jenna Hayes and Lillard score buckets while Ditto, Hayes and Lillard added free throws to increase the lead. Clemence ended the Cowgirl half with a nice bucket that gave Abilene a 21-13 lead at the break.

“Reagen jumps like crazy and she gets her hand on the ball and does a great job for us defensively out front,” coach Liby said. “She just messes it up for the other team. She has always had that knack of reading the ball and making steals. It’s fun to watch her take it away and put it in the hoop. Abi is at a whole different level than most girls. She’s been here for a while. She knows what to do with the ball so we try to get it to her as often as we can. I thought Joy Clemence had probably one of her better games tonight.”

Playing probably one its best game of the season, the Cowgirls took care of the ball and committed far fewer turnovers than their season average. Abilene was also strong to the boards Thursday grabbing both defensive and offensive rebounds.

Lillard opened the second half with a nice bucket for the Cowgirls and then Ditto went back-to-back with steals that turned into fast break baskets as Abilene went up by 13 points at 27-14.

“I did like our offense tonight,” coach Liby said. “I think we percolated a little bit better tonight. We hit some open looks and I think it kind of came around a little bit.”

Lillard hit one of two from the line to open the fourth and Stout had a big follow up shot to push the Cowgirls to a 30-19 lead early in the fourth. Ditto added a field goal and Abilene went three of six at the line to close out the game. The Cowgirls intensified defensive play limited the Panthers to two fourth quarter points, as Abilene pulled away for the 35-21 final.

Lillard led all scorers with 12 points while Ditto added nine for the Cowgirls. Concordia was led by Rundus with 10 points.

“We get to play them again next week up at their place,” coach Liby said. “The fan support tonight was fun. The student body section was great and we had a nice crowd considering the circumstances. Hopefully we will get to have some fans at Concordia next week.”