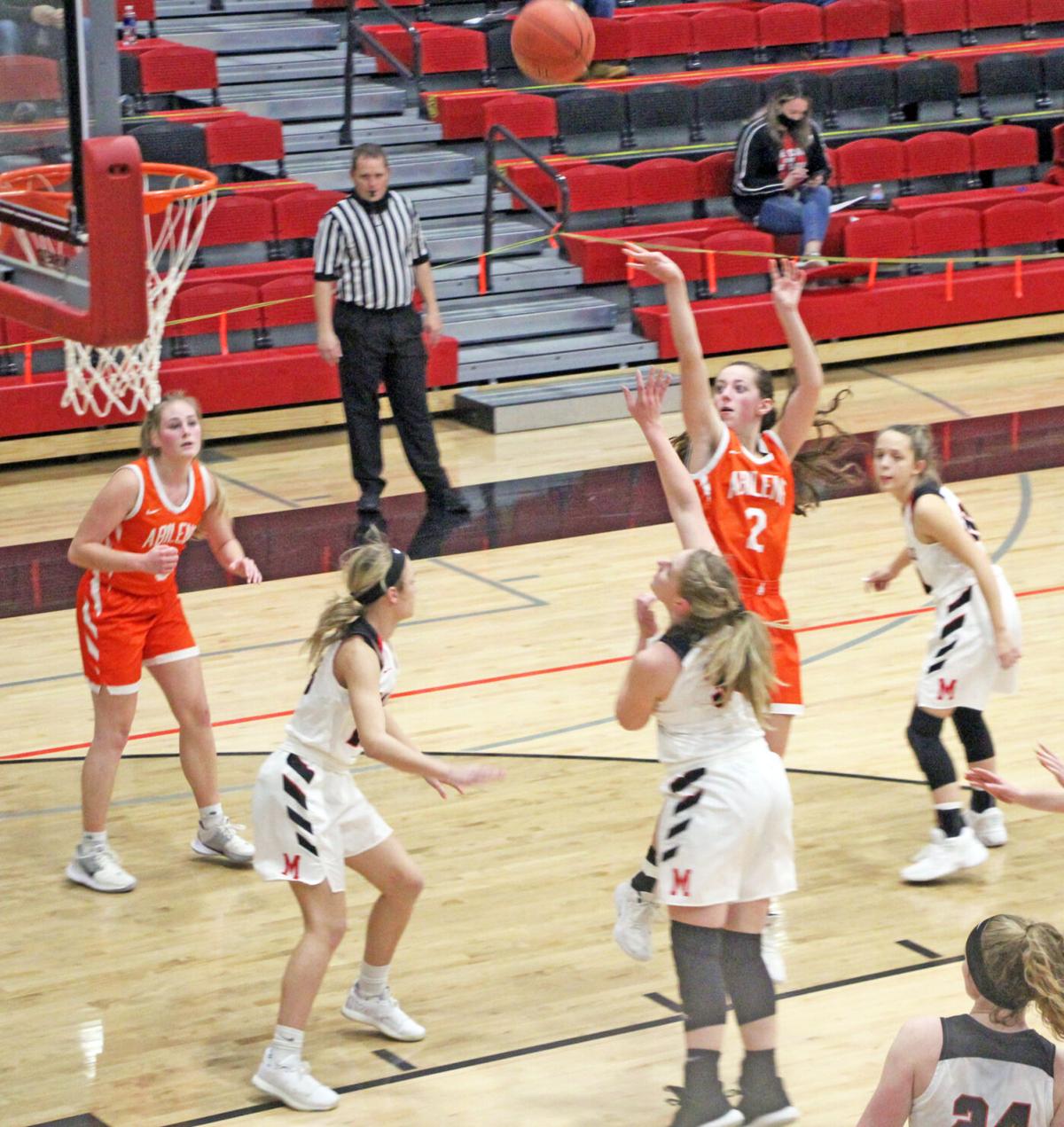 Abilene senior Reagan Ditto (2) gets a shot off over a pair of Marysville defenders in second half action Friday night. The Cowgirls fell to the Lady Bulldogs 45-26 at Marysville. 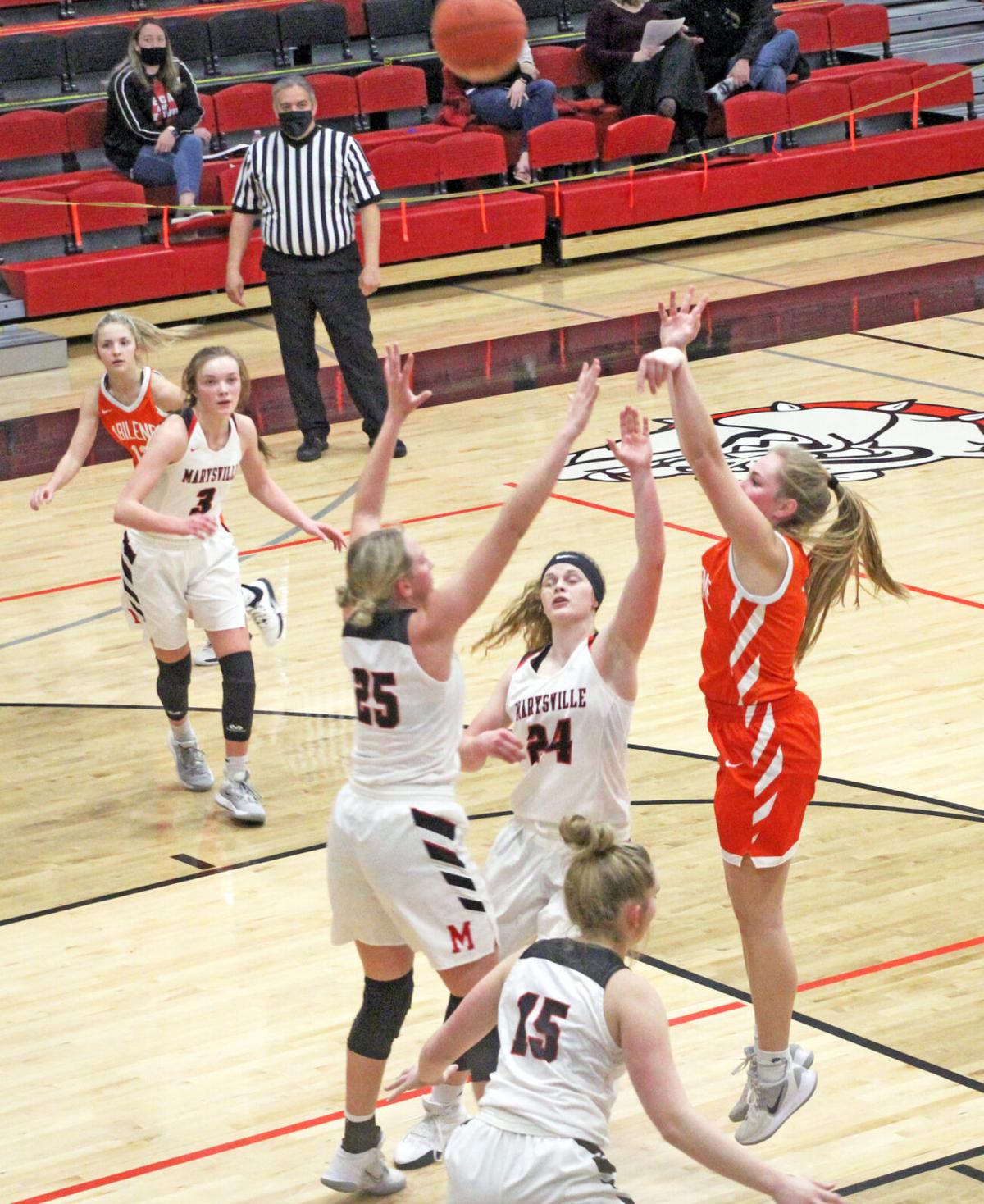 The Cowgirls fell to the Lady Bulldogs 45-26 at Marysville. Senior Abi Lillard shoots for two for the Cowgirls.

Abilene senior Reagan Ditto (2) gets a shot off over a pair of Marysville defenders in second half action Friday night. The Cowgirls fell to the Lady Bulldogs 45-26 at Marysville.

The Cowgirls fell to the Lady Bulldogs 45-26 at Marysville. Senior Abi Lillard shoots for two for the Cowgirls.

MARYSVILLE – Offensive struggles continue to haunt the Abilene Cowgirl basketball team as they fell for the third time this season 45-26 to Marysville Friday night on the road.

Lacking size inside, the Cowgirls attempted to shift their offense to an outside shooting team in the contest against the Lady Bulldogs. The hope was to get Marysville to move outside to defend and possibly free up the lane for scoring drives to the basket. The Cowgirls had opportunities as it played out, but just couldn’t get the ball in the hoop.

Despite senior Abi Lillard having a career high 15 points in the game including three of four three-pointers, Abilene shot a dreadful 17 percent from field, connecting on seven of 40 shots. The Cowgirls were four of 14 from behind the arc but were successful at the free-throw line going eight of 12.

“We need shooters,” Abilene head coach Mike Liby said. “We’ve been saying that for a while. We’ve been practicing. We are not a good outside shooting team yet. Someday we will be, we hope. We tried to mix up our defense too a little. Until we establish some consistent outside shooting, we are going to struggle a little bit.

“Our bench gave us some good minutes tonight,” Liby said. “Claira (Dannefer) did some good things and Sammy (Stout) had a better game for us. I think Alice Bathurst came in and gave us some quality minutes and Lexi Barnes at the end of the game.”

Lillard put the Cowgirls on the board first in the game but Marysville rattled off six straight points as junior Eva Peschel had a hot hand for the Lady Bulldogs. Peschel and her teammates opened up a seven-point advantage over Abilene to end the first at 17-10. Midway through the quarter Abilene’s Jenna Hayes popped in a trey to pull the Cowgirls within two at 8-6 but that would be as close as it would get for Abilene in the game.

Lillard netted back-to-back threes midway through the second period to pull Abilene back within six at 24-18. Free throws by Lillard and junior Alice Bathurst to end the first half kept Abilene in the game at 27-21.

The second half was an offensive nightmare for the Cowgirls as they were only able to score five points total in 16 minutes. Hayes had a jumper with under two-minutes to play for Abilene’s only points in the third. Meanwhile the Lady Bulldogs increased their lead to 37-23 headed to the fourth.

In the fourth, Lillard made her third trey of the game midway through the period and that would be it for the Cowgirls. Peschel and the Lady Bulldogs had their hottest quarter scoring the ball as they ended with a 45 – 26 win over Abilene.

The Cowgirls are 0-3 and will play their first home game of the season Tuesday when they host Wamego (2-1). Wamego won its second game of the year with a 43-31 win at Concordia Friday.

“We are excited about finally getting to play in our own house,” Liby said about Tuesday’s game. “Wamego is a good team. We are going to get well, we will learn and we will just move on from tonight.”