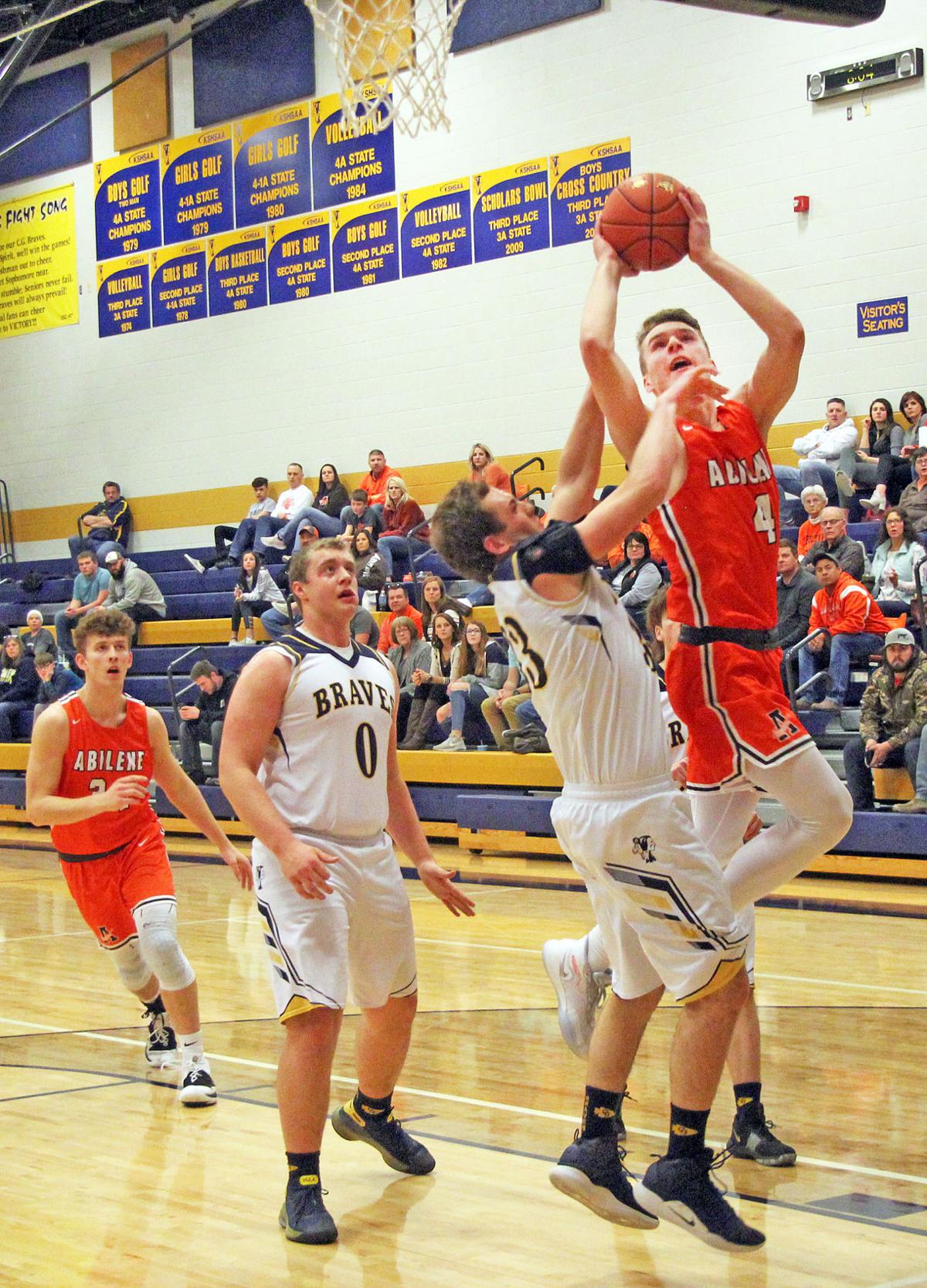 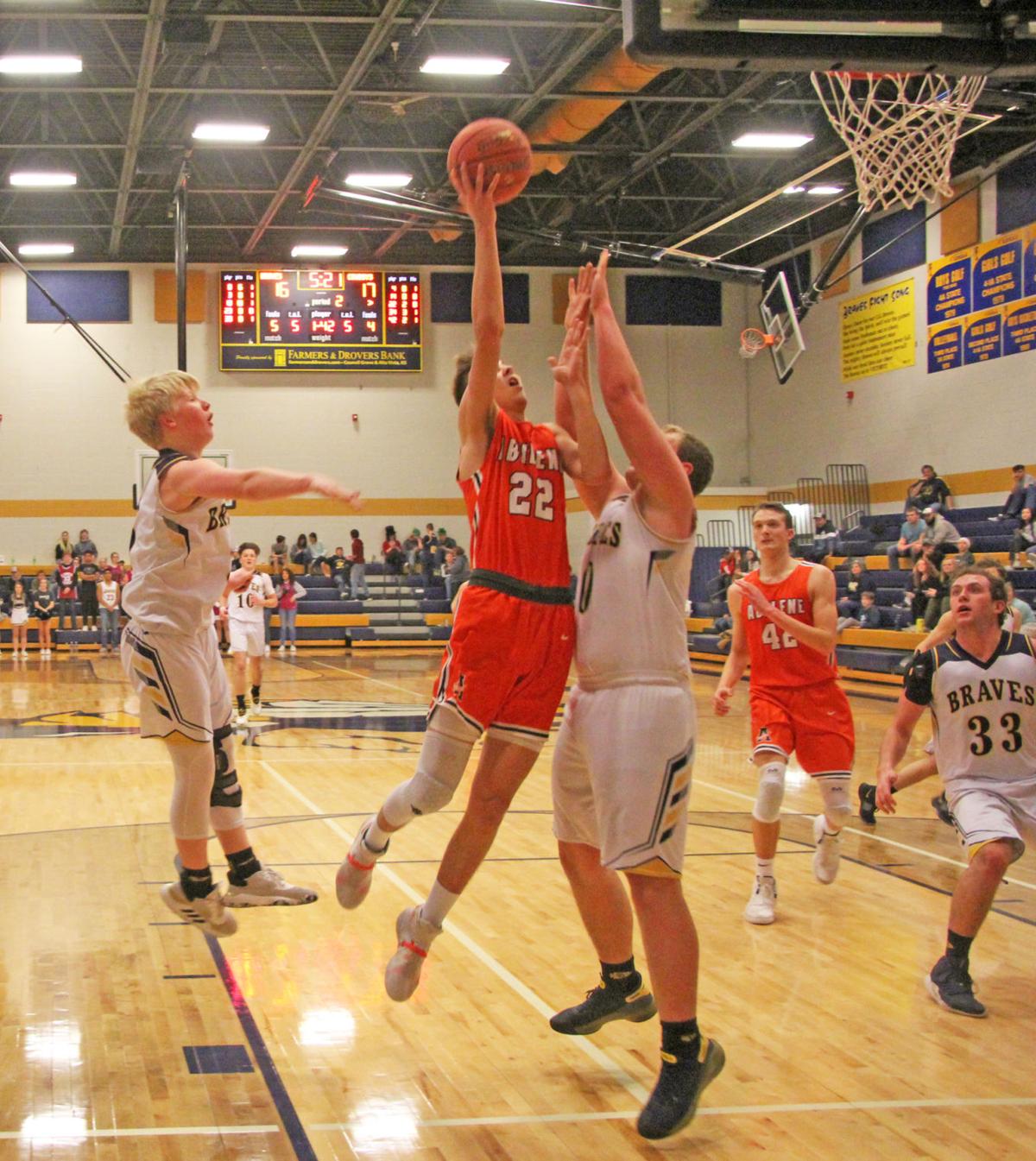 COUNCIL GROVE – After leading by 10 at half time, the Abilene Cowboys came storming out of the locker room with a 23 point third-quarter performance that enabled them to hold off a fourth quarter comeback by the Council Grove Braves in a 65-54 win Tuesday night on the road.

The Cowboys broke out to an 8-0 lead to open the game but the hustling Braves came right back with an 11-5 run to be within two before senior Travis Beetch sealed a layup just before the buzzer to Abilene a 15-11 first-quarter lead.

Abilene junior Josh Stuber found his three-point shot in the second quarter to help guide the Cowboys to a 33-23 halftime advantage. Stuber had a career night with 15 points scored and he completed a double double with 10 rebounds.

“Josh was one of the bright spots for us tonight,” Abilene head coach Terry Taylor said. “He played with confidence and he had several offensive rebounds and put backs. He just did a nice job offensively. That was good to see. He needed that for his confidence. That was fun. We need him and Blaise McVan to continue to score for us so it doesn’t just fall on one or two guys each night. I am really pleased with Josh tonight. That was by far his best offensive performance of the season.”

Stuber came back in Abilene’s big third quarter with another six points and sophomore Kaleb Becker swished eight points as the Cowboys roared to a 56-31 third-period score. Becker started the Cowboys with an early jumper followed by a Stuber bucket and an amazing tip in shot by Beetch. Becker followed that with a lay in off a feed from Avery Bryson to push the Cowboy lead.

“The third quarter was what we hoped to play the whole game like,” Taylor said. “We weren’t mentally ready to play at the beginning. The first half we struggled through it and we were fortunate to make some threes and be up by 10 at half. A little meeting of the minds at halftime and then the third quarter we came out and played really well. We guarded, we got out on the break, we finished plays and made a couple of threes and they looked like a basketball team in the third quarter.

“We took the starters out after we were up by 30 and our subs couldn’t hold them tonight. We turned it over, took bad shots and we didn’t guard. One of those situations that was frustrating for the kids and me. You are up 30 and you sit down and relax a little bit thinking you are done for the night. The second group didn’t do a good job of holding the lead tonight and then here came Council Grove. They made about every shot they took in the fourth quarter. They did everything right for themselves.”

The Cowboys went on to lead by 30 briefly at 56-26 before Council Grove answered with five points to end the period. They continued that run as they ran off a 19-0 unanswered stretch to begin the fourth against Abilene subs. Before the Cowboys could score, Council Grove whittled the once 30 point Abilene lead to a 56-48 ball game.

The starters came back into play the final two and half minutes and Beetch and Becker pushed the Cowboy lead back to 65-51 before Brave senior Jeric Heath netted a game ending three.

Becker led the Cowboys with 18, while Beetch finished with 17 to go along with Stuber’s 15. Council Grove’s Koen Hula and Hadyn Bieling led the Braves with 14 points each and Heath finished with 11.

The Cowboys improved to 10-5 and more importantly they improved their standing in the Class 4A West as they sit in fourth after back-to-back wins while Buhler (9-6) fell for the second time Tuesday 59-74 to Maize after dropping a three-point loss at Mulvane on Friday. The Cowboys host Wamego on Friday whom the beat 71-70 in two overtimes in January at Wamego.

“Friday should be an exciting game,” Taylor said. “I am sure they are anxious to play us after it took us two overtimes to win at their place.”