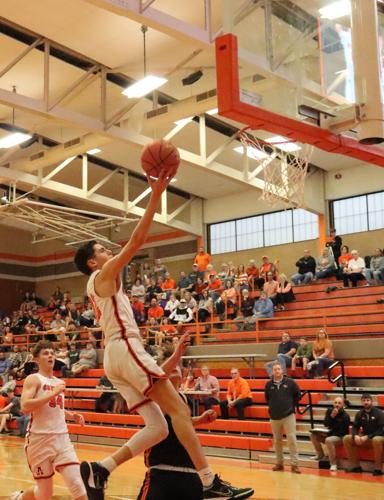 Triston Cottone scores on a layup after stealing the ball from an Augusta player. Cottone scored a game high 14 points. Bottom:

Triston Cottone scores on a layup after stealing the ball from an Augusta player. Cottone scored a game high 14 points. Bottom:

Both teams struggled offensively in the opening quarter, as neither team shot the ball well. Abilene would lead just 5-1 at the end of the first quarter. Augusta would finally score their first basket of the game at the 5:52 mark of the second quarter to cut the Abilene lead to 9-3. The Orioles would go on a mini run of 11-7 to cut the Cowboys lead to just four points at 16-12 with 2:55 left to go in the half.

Closing out the remainder of the first half and opening the third quarter, Abilene would use a 13 straight point run to open up the lead 29-13. During the run, multiple Cowboys scored, including Triston Cottone, Kaleb Becker, Thomas McClendon and Brax Fisher. The Abilene defense then continued to force Augusta into turnovers leading to offensive points, taking a 25 point lead at the end of third quarter 45-20. Cooper Wildey and Triston Cottone 3-pointers helped the Cowboys open up the lead in the quarter.

Wildey and McClendon would do the Abilene scoring in the final quarter with four points a piece to close out the win 53-31. 3 Abilene players scored in double figures in the game led by Triston Cottone with 14 points, Thomas McClendon with 11 points and Cooper Wildey with 10 points. With the win, the Cowboys will host Rock Creek in the Sub State Championship Saturday at 6 p.m.