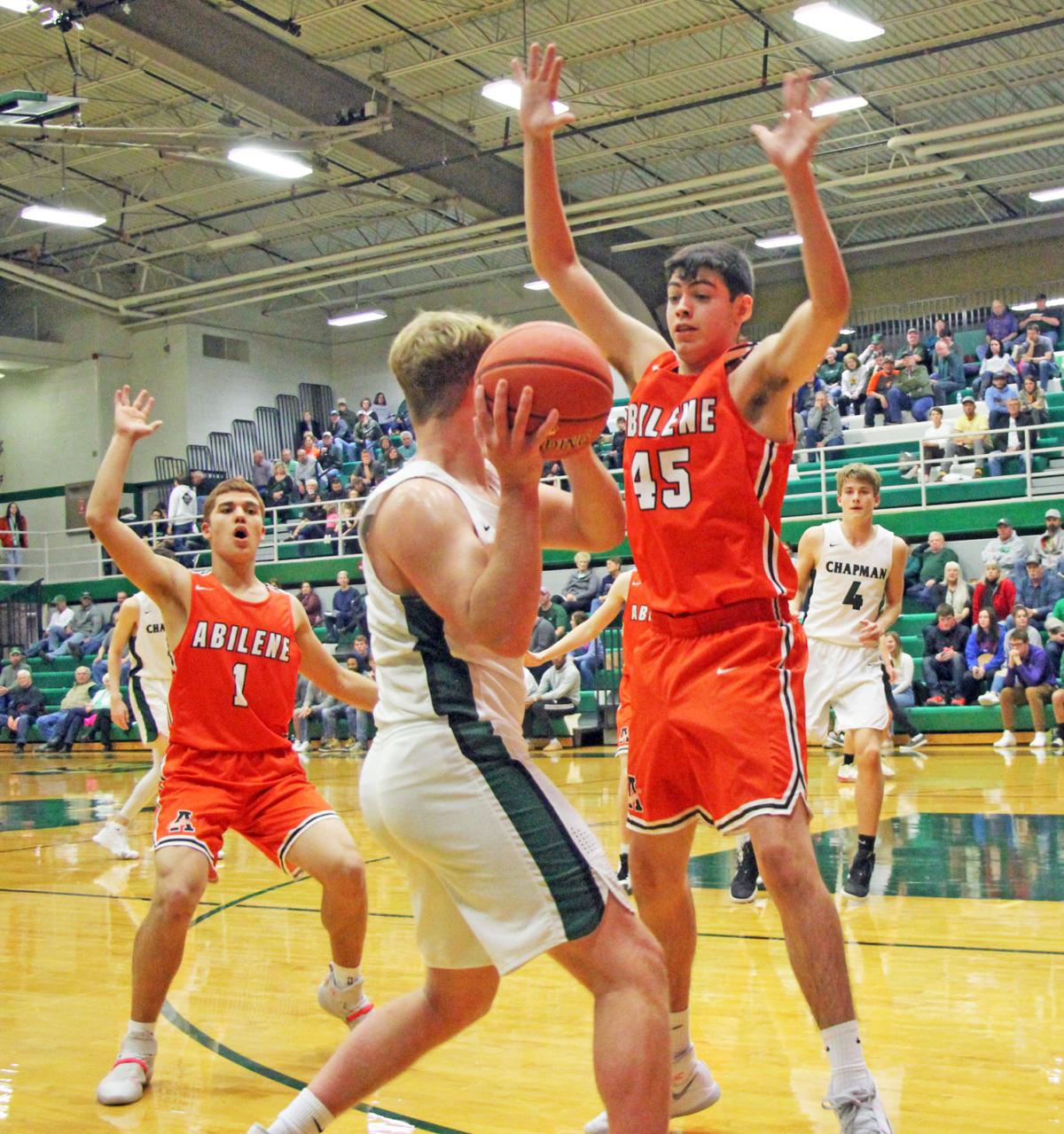 Abilene’s Kieryan Anderson (45) and Jayshaun Jones (1) capture Chapman’s Noah Riegel (32) in the corner during Abilene’s win at Chapman on Tuesday. 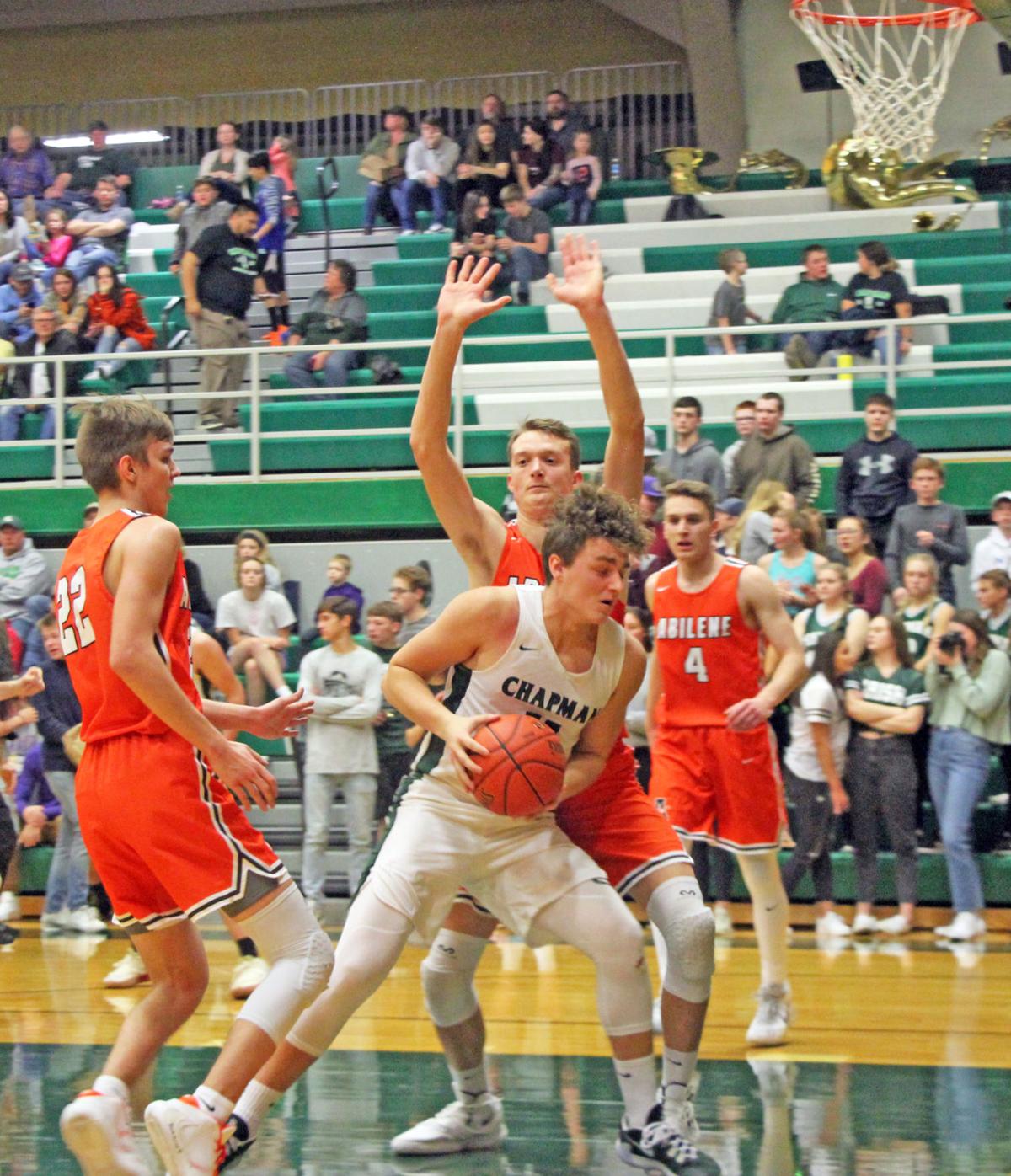 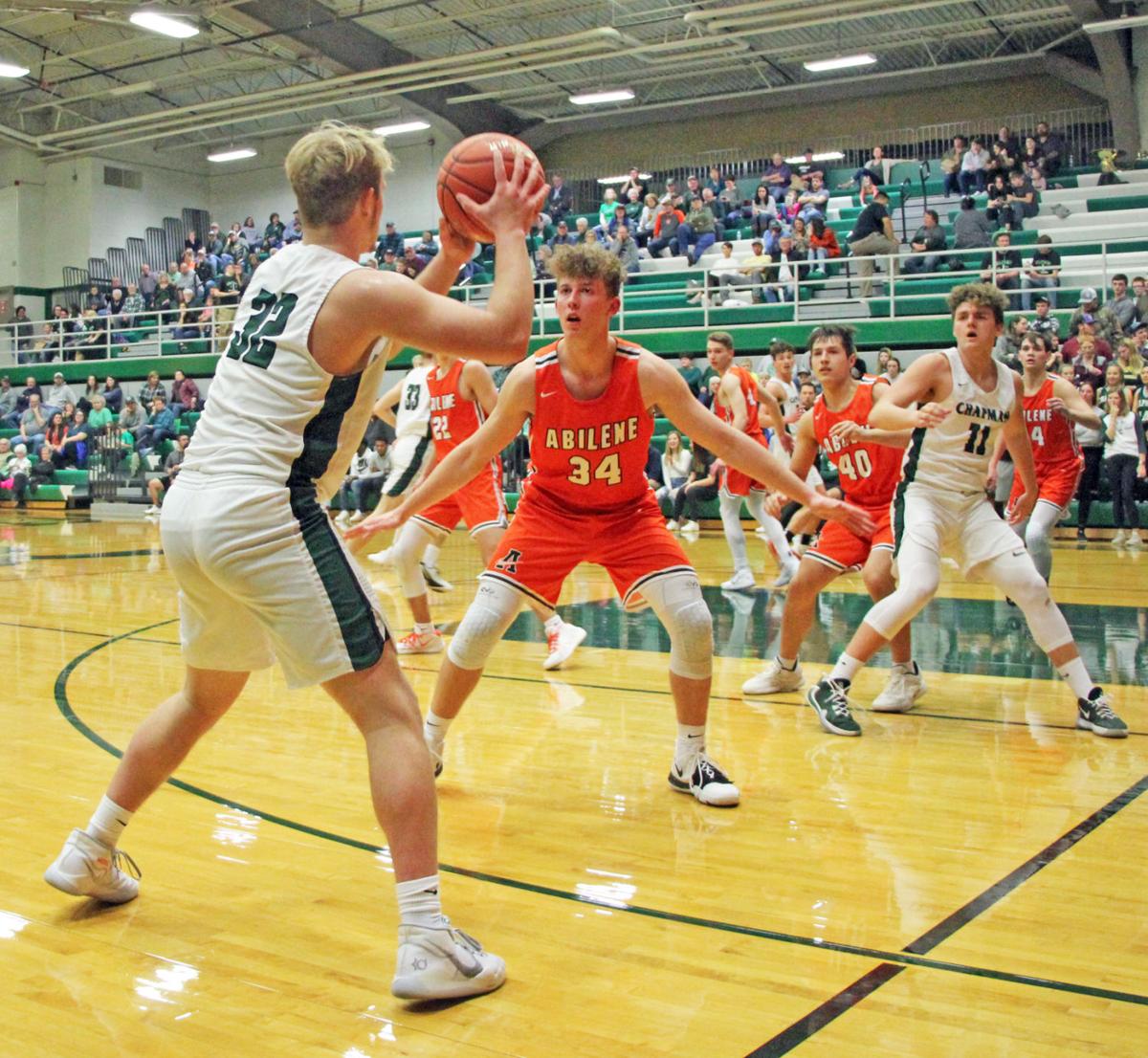 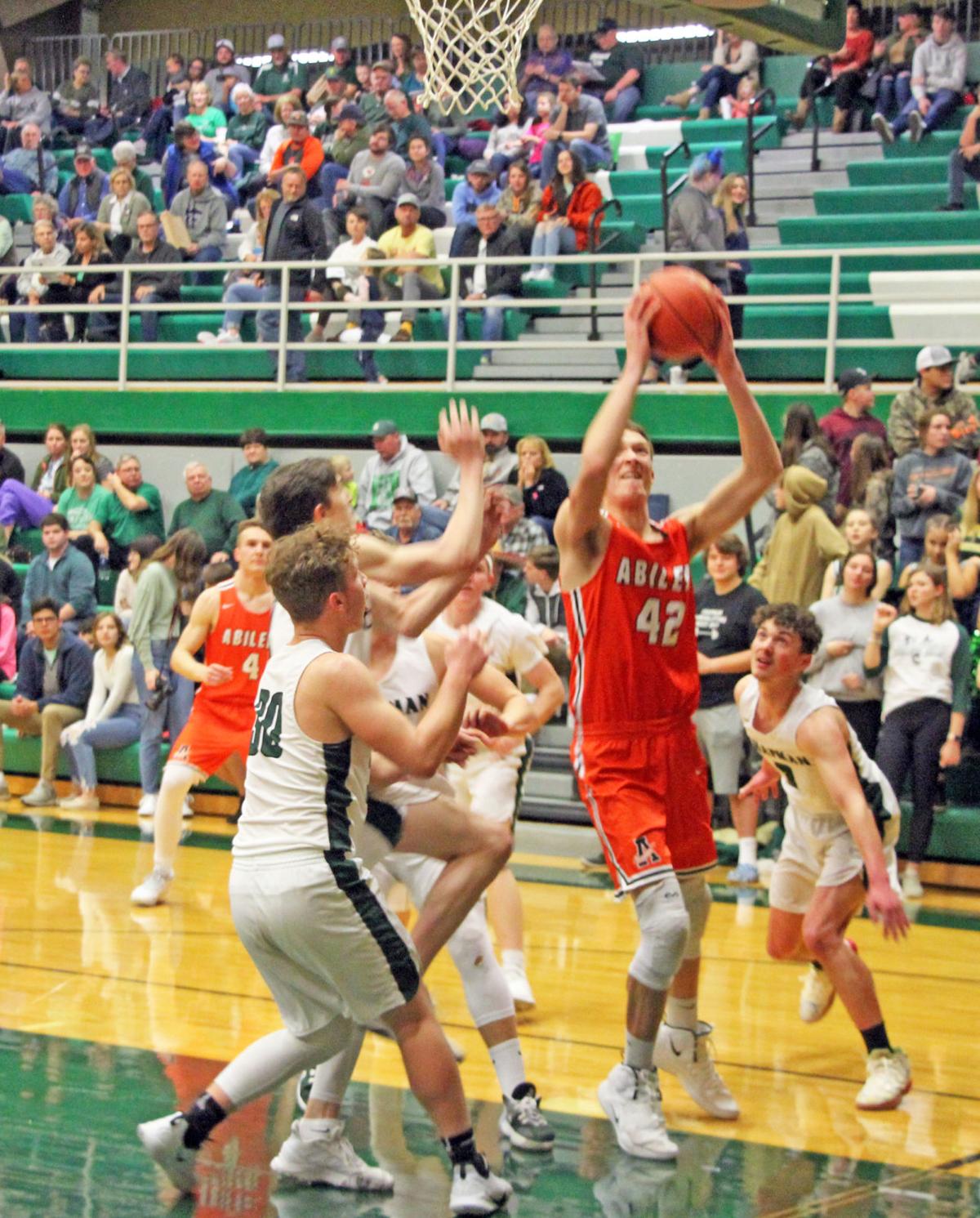 Abilene’s Kieryan Anderson (45) and Jayshaun Jones (1) capture Chapman’s Noah Riegel (32) in the corner during Abilene’s win at Chapman on Tuesday.

CHAPMAN – The Abilene Cowboys continued its winning ways against the Fighting Irish of Chapman Tuesday night with a 62-44 victory following the holiday break.

Chapman senior center Kel Stroud got the Irish on the board first to open the game with a nice put back under the basket. Stroud went on to lead the Irish in scoring with 14 points.

The Cowboys got a driving bucket from junior guard Josh Stuber and an old fashioned three-pointer from sophomore Kaleb Becker for a quick 5-2 advantage and never trailed again. Abilene senior Travis Beetch scored six of his game high 20 points to push the Cowboys to an 18-12 first period lead.

Chapman junior center Jon Jenkins popped a trey followed by a jumper to keep the Irish within reach early and sophomore Eli Riegel drained a trey with time expiring to bring Chapman within six to end the first.

Chapman ran off a nine to five run to open the second period to pull within two at 21-23 with just over four minutes remaining in the first half. Senior Jake Vercher opened with a trey and after a pair of charity tosses and Stroud had back-to-back baskets at the rim. Becker and junior Kieryan Anderson got baskets for the Cowboys but Eli Riegel got his second trey to keep the Irish within three at the two-minute mark.

Stuber answered with two from the line and junior Avery Bryson swished a three from the corner and the Cowboys took a 32-24 lead to the locker room.

“At halftime it was just an eight point game and it was closer than that throughout the first half,” Abilene head coach Terry Taylor said. “Their kids played hard, made some shots and we missed some opportunities to score. I think that’s the best Chapman has played all year. They played hard and they made some shots.”

Beetch went on the attack to open the second half as he created two steals and converted two layups and then hit a trey after Becker got a layup off an easy feed by Beetch. The Cowboys had just opened the third with a 9-2 run to lead 41-26.

After an Irish timeout, Bryson hit back-to-back buckets and then Anderson finished off the period for the Cowboys with consecutive baskets. That gave the Cowboys a 51-36 lead headed to the fourth.

“We kind of got some space between us in the third quarter,” Taylor said. “It went to 12-15 points for most of the rest of the game. Our bench did great tonight. Guys like Avery Bryson and Kieryan Anderson both came in and scored in double figures. That was big for us. Those guys gave us some big minutes tonight.”

Bryson gave the Cowboys a 56-41 lead to begin the fourth after hitting a jumper and then draining another three-pointer. Beetch, Anderson and sophomore guard Jaylen West capped the Abilene win with consecutive makes. West’s came with time expiring as he raced the Irish and the clock to the bucket with a turnover turned layup for the 62-44 Abilene win.

Beetch led all scorers with 20 points while Stroud had 14 for Chapman. Bryson and Anderson both came in off the bench for the Cowboys and ended in double digits as Bryson scored 14 and Anderson had a career high 10.

“I thought we played well defensively tonight,” Taylor said. “I think we kept Noah Riegel scoreless. He’s been their leading scorer all year. A returning starter. He is a good player. When you can guard a player like him and shut him out that speaks well for the kids on defense.”

Abilene improves to 2-0 in the NCKL race and will head to Marysville on Friday. Chapman drops to 0-2 in league play and they play at Clay Center next.

“This was a good win for us,” Taylor said. “For us to come over here and battle in front of this good crowd tonight. We had a lot of people here and so did Chapman. That makes it a good atmosphere for high school basketball. For the first game back after break, we hope this is an advantage for us because Marysville didn’t play tonight. We are off to a good start in the league at 2-0 but we need to go to Marysville and take care of business.”