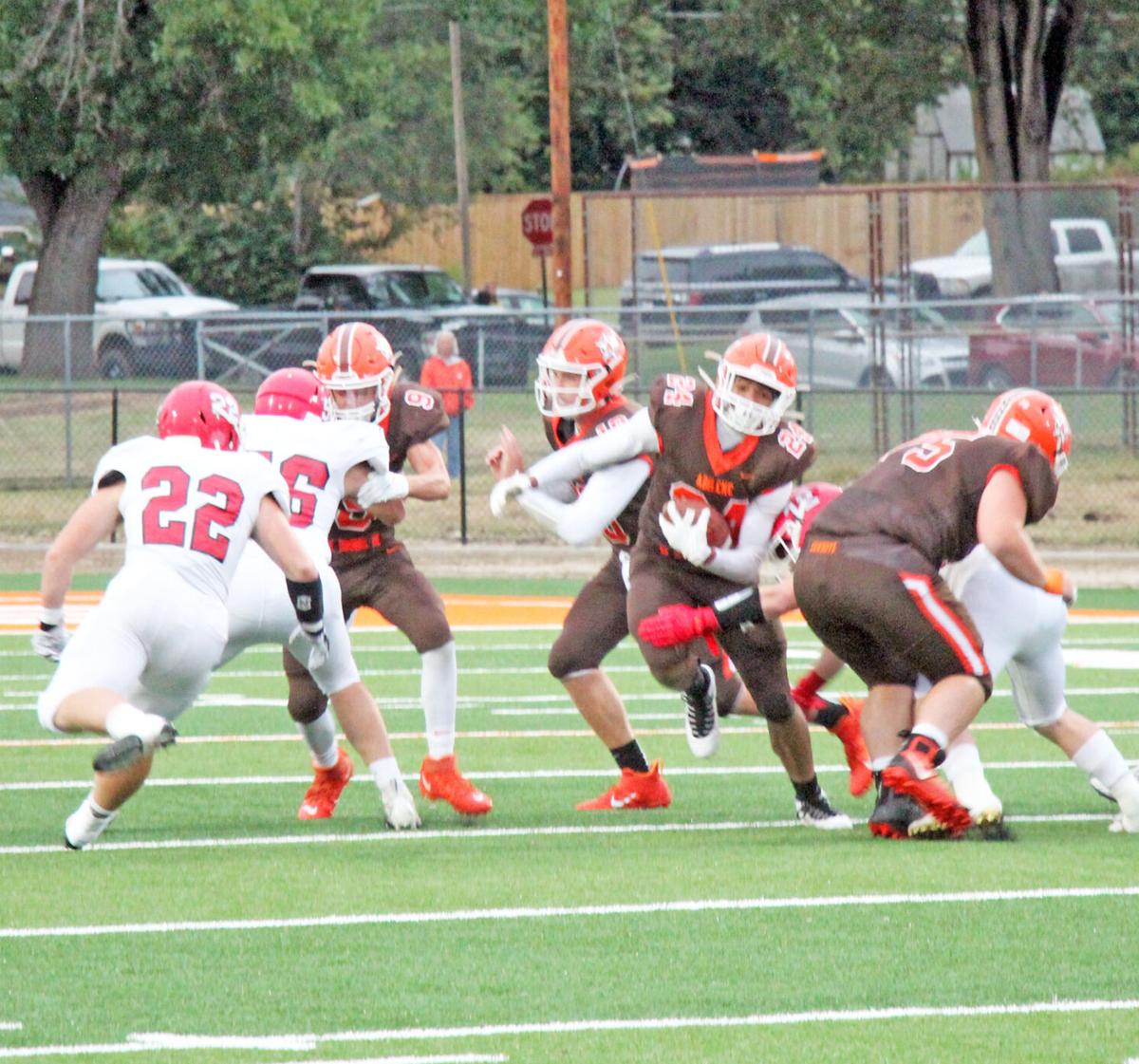 Abilene running back J’Angelo Herbert (24) is just one block away from bursting through the hole for a long run against Concordia. Herbert led the Cowboys in rushing but Concordia won the battle 42-0. 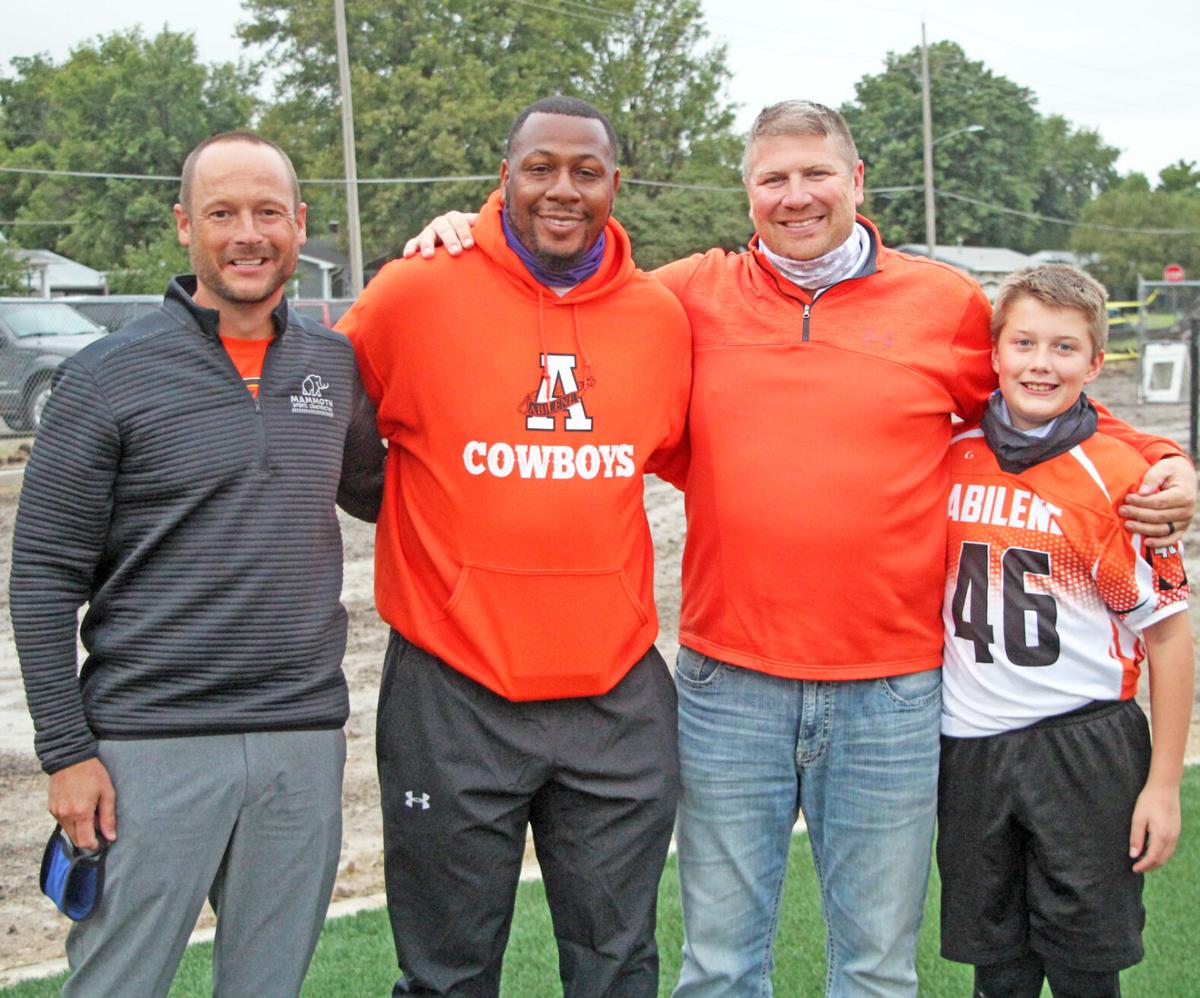 Former NFL quarterback and K-State ‘Ring of Honor’ member Michael Bishop, second from left, was on hand Friday night as Abilene played its first game on the new football field. Mammoth Sports Construction vice-president Brian Morris, left, and Abilene school board president Kyle Becker are all smiles with the results. Bishop spent time addressing the Cowboys before they took the field Friday night. He works with Mammoth Sports in promotions.

Abilene running back J’Angelo Herbert (24) is just one block away from bursting through the hole for a long run against Concordia. Herbert led the Cowboys in rushing but Concordia won the battle 42-0.

Former NFL quarterback and K-State ‘Ring of Honor’ member Michael Bishop, second from left, was on hand Friday night as Abilene played its first game on the new football field. Mammoth Sports Construction vice-president Brian Morris, left, and Abilene school board president Kyle Becker are all smiles with the results. Bishop spent time addressing the Cowboys before they took the field Friday night. He works with Mammoth Sports in promotions.

It wasn’t what the young Abilene Cowboys wanted as an outcome after playing the first home football game on the new playing surface at Cowboy Stadium. The Concordia Panthers came to town and claimed their second win on the season with a 42-0 win over the Cowboys.

Abilene did show some improvement in week two after falling 57-0 a week ago at Clay Center. Cowboy head coach Brad Nicks saw a lot of positives in game two as the Cowboys continue to buy into the new system and learn a totally new offense on the gridiron. Nicks saw his Cowboys play even with the 2-0 Panthers through the first period of the game as neither team could find one of the two orange end zones.

“We made huge gains,” Nicks said. “We are still not quite where we want to be at. We had some key moments in the game where we made small mistakes. We are not good enough right now to recover from some of those things. The kids played their tails off. I am so proud of the kids. I have challenged them all week about wanting to be physical and flying around and going hard on every snap. I feel like they did that for the most part.”

However, it only took the Panthers three plays into the second quarter to scratch across the game’s first score. Senior Hunter Schroeder scored the first of two rushing touchdowns in the game with 11:24 showing on the second quarter clock. Senior Easton Atwood kicked the extra point and the Panthers broke the seal first for a 7-0 lead.

Concordia scored on its second possession of period two when senior quarterback Wyatt Trost ran in from the Cowboy one-yard line. Atwood’s second kick was good and the Panthers had a 14-0 lead with 3:28 remaining in the half.

The Cowboys struggled running the ball most of the night but senior J’Angelo Herbert once again carried the main load as Abilene rushed for 138 yards on the night. Herbert accounted for 70 of those yards on 14 carries. Junior quarterback Kaleb Becker added 23 rushing yards to the Cowboy total with junior Stewart Scott getting 16 yards on power sweep plays to the outside. Senior Caleb Burt had 15 yards on five carries.

“J’Angelo and Caleb are really a pretty good one-two punch for us,” Nicks said. “We’ve been working on their burst. They are getting better. We had a couple of runs tonight that were almost break aways.”

The Panthers closed out the first half with a big defensive stand that kept the Cowboys buried deep in their own territory and after Becker retrieved a high punt snap over his head and got a pooch kick off, Concordia’s Alec Francis was right there for a short return for a score. Following Atwood’s third kick of the quarter, Concordia led 21-0 heading to the locker rooms.

“We were tired tonight,” Nicks said. “We have to do a better job on offense. We are not moving the ball right now so that means the defense is on the field too much. I apologized to the defense because they played their tails off. We have got to get something going on the offensive end and that will be the focus this week again. We just need to get a few things rolling. We are better. We made some strides this week and we will continue to make those strides.”

The Panthers added two late third quarter scores on long runs as Schroeder took off for a 23-yard scoring jaunt with just under four minutes remaining and senior Dylan Thoman scampered 47 yards with 1:30 left in the period to make the score 35-0 after three periods.

Concordia ran the ball 47 times for 371 yards on the ground and five scores on the night and Trost went three of 10 for 41 yards and junior Cav Carlgren finished zero for one. Abilene’s Becker and Nathan Hartman picked off the Panther throwers during the game.

Schroeder was the workhorse for the Panthers carrying the ball 18 times for 117 yards. Junior Keyan Miller added 107 yards on 12 totes. Trost finished with 53 yards rushing and freshman Cameron Cleveland added 33 yards to the Panther total.

The fourth quarter went scoreless until the final 1:51 when Miller rushed for a 17-yard score to make the final 42-0.

Becker and his receivers were just off by inches on the night but he did complete a neat play to junior Cooper Wildey for six yards.

Abilene senior Robbie Keener made his first start of the season on defense and led the Cowboys with 12 tackles while Wildey had eight stops including a pass break up. Burt had nine stops at nose tackle including a sack and a tackle for loss and Herbert provided seven tackles.

“Their attitudes and effort is just great,” Nicks said. “They have bought in. I know we are going to get there in the end. We have to keep chopping wood and go through the storm to get there.”

Abilene’s plays the second of three consecutive weeks at home this week as it hosts Chapman for homecoming and senior recognition night. The Abilene/Chapman showdown is claimed to be the oldest rivalry west of the Mississippi River.

“Hey, it’s Chapman week,” Nicks said. “It’ll be a good game. They are a good football team that is well coached. They run kind of the same offense that we do so it so it should be a really good game.”