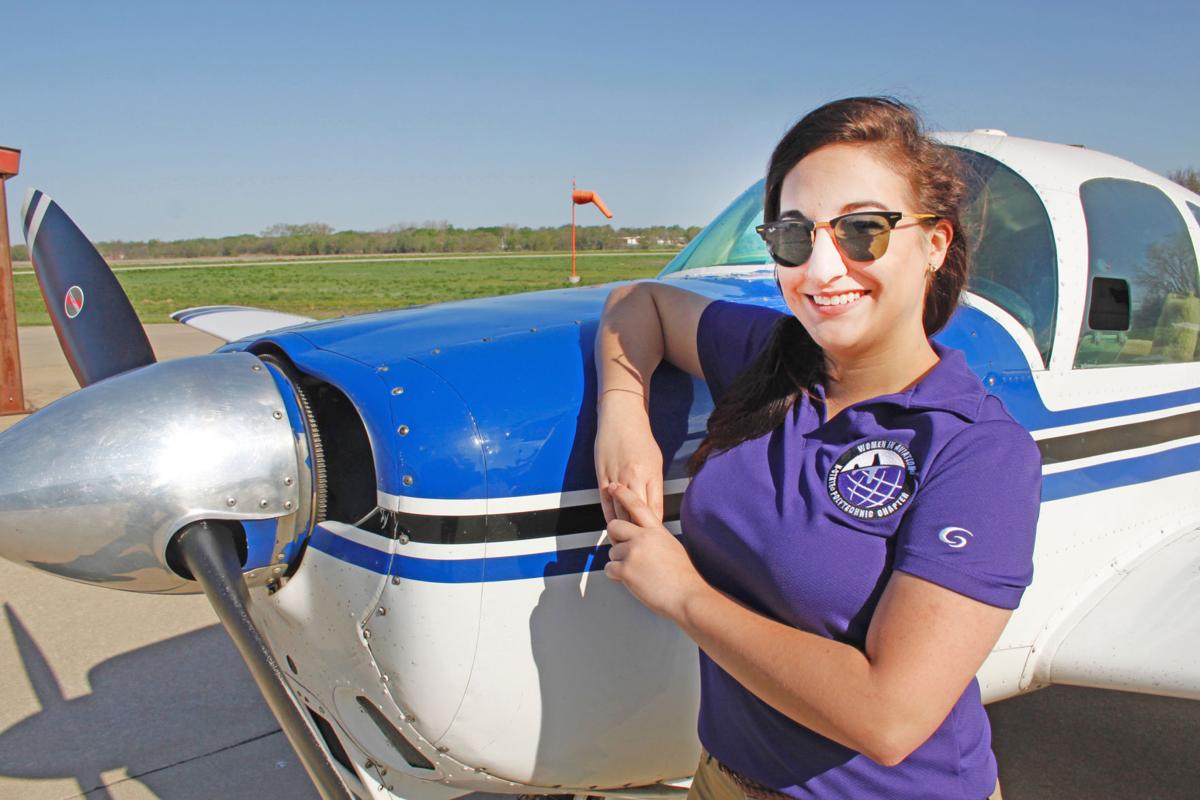 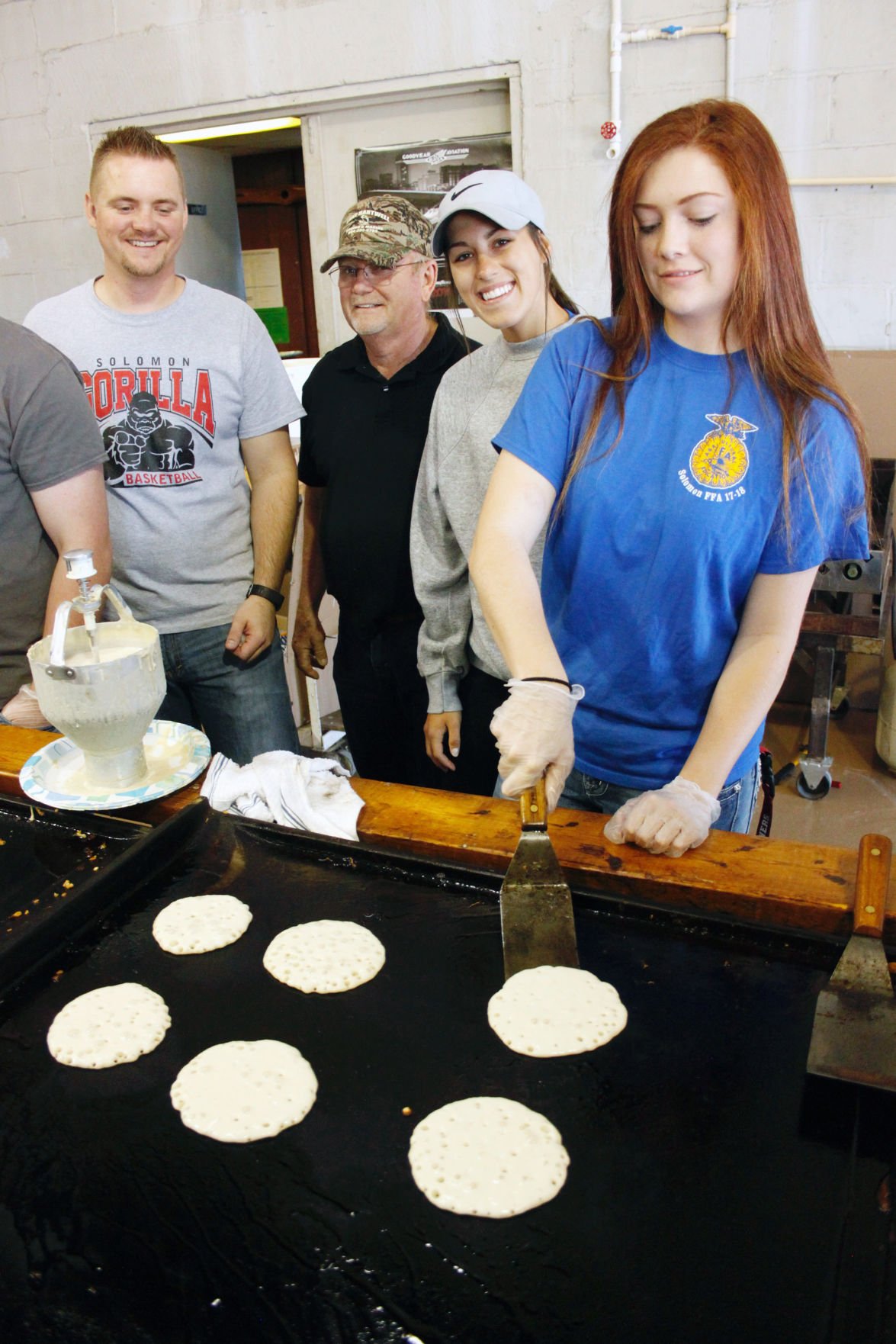 KLyle McCook (from left), Mike Alexander, Maddison Robinson and Olivia Holt volunteer at the Abilene Aviation Association 26th Annual Fly-In and Pancake Feed, held Saturday morning at the Abilene Municipal Airport. A portion of the event’s proceeds went toward FFA’s fundraising efforts for an armed forces memorial to be erected in Solomon City Park. McCook is a volunteer with the memorial effort, Alexander is a veteran, Robinson is finishing out her senior year at Solomon High School and her FFA presidency, and Holt, a junior at SHS, is a sentinel in FFA.

KLyle McCook (from left), Mike Alexander, Maddison Robinson and Olivia Holt volunteer at the Abilene Aviation Association 26th Annual Fly-In and Pancake Feed, held Saturday morning at the Abilene Municipal Airport. A portion of the event’s proceeds went toward FFA’s fundraising efforts for an armed forces memorial to be erected in Solomon City Park. McCook is a volunteer with the memorial effort, Alexander is a veteran, Robinson is finishing out her senior year at Solomon High School and her FFA presidency, and Holt, a junior at SHS, is a sentinel in FFA.

Taylor Youtsey grew up riding in small airplanes with her dad, Bruce, who flew for fun from the Abilene Municipal Airport.

Back then, she had no interest in taking the wheel.

However, just before the start of her senior year at Abilene High School, Taylor told Bruce something that surprised him so much that he “about fell out of my chair.”

She had seen an airplane flying through the sky and thought “that would be kind of a cool thing to know how to do” so she expressed her interest in learning to fly.

Bruce, whose father and sister were also pilots, is thrilled that his daughter has caught the delight of flight.

“It was out of the blue,” Bruce said. “She wanted to go up. So we flew and it took off from there.”

Taylor enrolled in flying lessons at the local airport, where she visited Saturday for the Abilene Aviation Association’s 26th Annual Fly-In and Pancake Feed. A portion of the annual event’s proceeds go to scholarships and Taylor is this year’s winner.

Before becoming a flight fanatic, Taylor, a 2011 graduate of Abilene High School, was known for her involvement in Great Plains Theatre and for her love for Germany which drew her to study there for two weeks in high school.

Her senior year, her focus turned to the skies.

Bruce’s requirement for Taylor, if she wanted to pursue a private pilot’s license, was that she needed to fly at least two or three days a week, so she spent more than half of her weekdays after high school in Abilene airport planes.

“When you’re training for anything, you have to do it a lot to be proficient,” Bruce said. “Somebody who just flies once a month is a forever student.”

However, Bruce told Taylor, “the day you get up and groan, saying, ‘I have a flying lesson today and I don’t really want to go’ is the day we stop and just call it a great learning experience,” Bruce said. “To fly is not hard but you have to want it.”

For the next several months, Taylor kept the passion for flight, week in and week out. She earned a private pilot’s license through lessons from Jim Curtis, manager of the local airport, in March 2011.

However, during college she took a hiatus from aviation. But even then she didn’t stay on the ground.

While earning bachelor’s degrees in history and German at the University of Kansas, Taylor studied abroad for a year in Germany, followed by two months in Morocco. After graduating in December 2015, she was ready to be back in the cockpit.

“I decided to come back to aviation because I really love to fly,” Taylor said.

When she returned to aviation, Taylor zipped down to Florida to experience a change of scenery while earning an instrument rating from Epic Flight Academy, then started attending Kansas State University Polytechnic Campus. She expects to earn her instructor license this summer.

Despite Taylor’s initial enchantment with the idea of flying, there were two obstacles that threatened to hinder her from going full throttle: math and science.

“Getting my pilot’s license was my proudest moment because I’m not a big math and science person,” Taylor said. “Doing something so technical has been a real achievement for me.”

Learning aerodynamic concepts and understanding the mechanics of the engine have been challenges for her but she finds it rewarding whenever a new concept clicks.

“It’s empowering because it’s something I didn’t think I could do,” she said. “The fact that I’ve come this far (almost an instructor) is a huge accomplishment.”

As with most science, technology, engineering and math, or STEM, fields, women comprise a minority of students and professionals. Just six percent of pilots are women, according to Women in Aviation International.

Taylor, who is a member of K-State’s chapter of the organization, said she wanted to encourage girls interested in flight as well as anyone who struggles in STEM to not shy away from pursuing aviation.

“I don’t really like math and science but here I am, about to be an instructor. So you can do it even if you don’t think it’s your strength,” Taylor said. “It’s a fun hobby and a really good career to get into.”

She cautioned that flying is challenging to learn and requires persistent dedication. Still, she said it’s a strong industry to enter because there is a high demand for pilots.

“It’s something most people don’t think about as a career option but it’s definitely a good one,” Taylor said. “Besides, who doesn’t want to be up there? You have the best view in the world.”