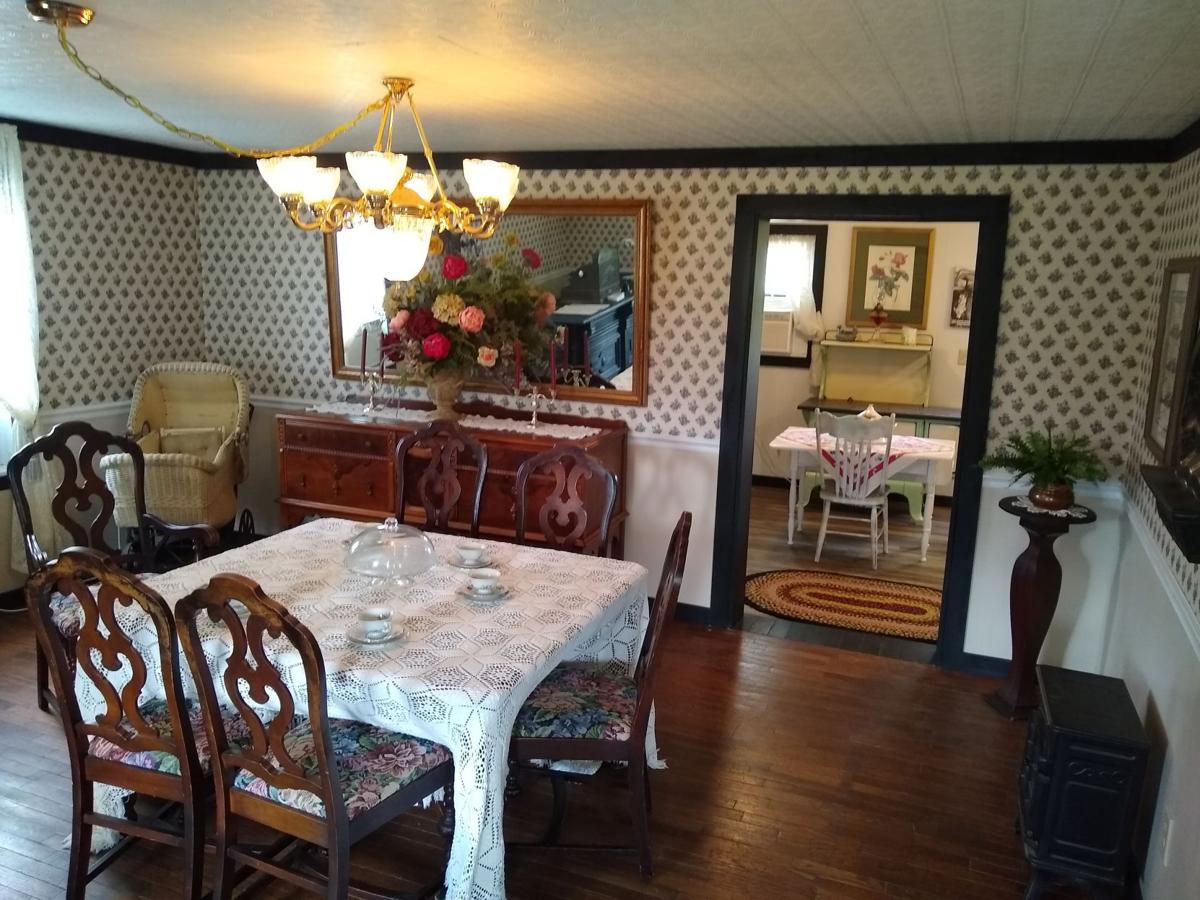 The downstairs of the Merchants Hotel has been refurbished, renovated and furnished in recent months to make it attractive and comfortable as well as a possible venue for small groups wanting a place to meet. 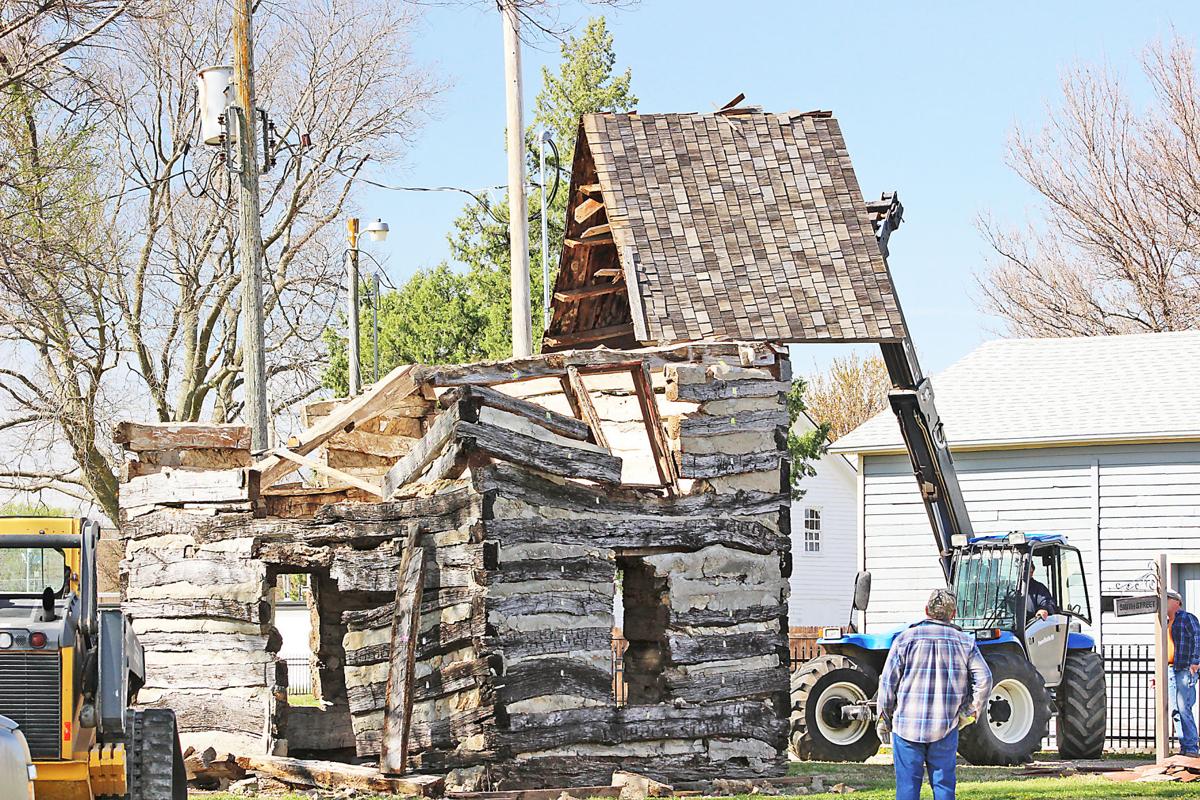 Workers painstakingly remove the roof of the historic 1850s two-story cabin that was located on the north side of Old Abilene Town. Care was taken to not harm the original logs, which were numbered for reuse if salvageable or to serve as templates for new hand-hewn logs.

The downstairs of the Merchants Hotel has been refurbished, renovated and furnished in recent months to make it attractive and comfortable as well as a possible venue for small groups wanting a place to meet.

Workers painstakingly remove the roof of the historic 1850s two-story cabin that was located on the north side of Old Abilene Town. Care was taken to not harm the original logs, which were numbered for reuse if salvageable or to serve as templates for new hand-hewn logs.

Reporter’s note: After a several decade slide into decay, Old Abilene Town has been brought back to life thanks to a dedicated group of board members, volunteers and donors. In Part 2, this installment talks about the renovation of the Merchants Hotel and plans for the future.

Anyone who has ever been involved in remodeling a home — historic or otherwise — knows it takes a lot of time, energy and money.

The same is true for bringing back what was a run-down tourist attraction, but on a much larger scale.

While great strides have been made in the quest to bring back Old Abilene Town (OAT), it’s a slow process. Much of the work is being done by volunteers, with funding coming from sources like the Community Foundation of Dickinson County, some from Dickinson County, in-kind help from the city of Abilene (primarily during the Chisholm Trail Festival), private donors and others.

The Merchants Hotel at Old Abilene Town is a prime example of a building that’s been brought back, thanks to help from dedicated volunteers and donations, but it’s only one of the projects underway.

OAT Board President Michael Hook said Board Member Linda Ellison is the “mastermind” behind getting the Merchants Hotel restored. Ellison, in return, credits former Historic Abilene, Inc. President Larry Coulson and Audrey Sheets as the people who did the dirty work of “sheetrocking and wallpapering.”

Then Ellison donated the funds to have a decorator come in and “put the pretties together,” she said.

All the dirty work was worth it.

Today, the main floor of the old hotel is comfortable enough to live in with furnished rooms, a kitchen and even a bathroom with a changing station. Ellison would like to see people rent out the space for small groups like card parties, bridal or baby showers.

“It has air conditioning, but no heat — maybe by next year it will, but it will be comfortable in the summer,” Ellison said. “I want people to be able to hold things here.

“It’s kind of like a museum, but it’s a museum people can use,” she explained.

Ellison said items are no longer needed for the hotel. It’s such a small space there’s nowhere to put it.

Panels painted by renowned Abilene artist, the late Arch Davis, are located in the parlor area.

While the main floor has been finished, the upstairs rooms are stripped down to lathe. It may be reclaimed someday when time and money permit, Ellison said.

Ellison said she enjoys being part of bringing Old Abilene Town back to life.

“You can blame old Doc (Frank W.) Jordan,” Ellison said with a laugh. “He told me once, ‘Young lady, you owe your town.’ I guess he planted a seed.”

Interestingly enough, the building known as the Merchants Hotel was a house in Abilene that looked like the original hotel, according to a 1959 newspaper article, Hook said.

For Ellison and other members of the board, bringing the town back is a passion.

Board Vice President Andrew Kijowski wants to see OAT open year-round. He wants it to be a place people visit often and bring their friends.

“We don’t want to be mundane,” Kijowski said, explaining they want it to be a memorable experience.

Hook said the board’s leadership and sweat equity is key to restoring the attraction.

“For many of these board members, they’re probably here more than they’re at home,” Hook said. “”It’s taken a lot of elbow grease and hard work to get this place back in shape.”

Besides the board, the revival of Old Abilene Town is also due to numerous volunteers who have put in thousands of hours.

Old Abilene Town includes structures that were built in 1957-58 when the attraction was built as well as historic buildings that were brought in from across the county.

Historic structures include several cabins — one of which is named Wild Bill’s cabin (it wasn’t), the blacksmith shop (which actually was a barn moved from Jordan’s farm which was located where Jayhawk Street is now located in Abilene, Hook said); the 1867 Grove Hill Schoolhouse; T.C. Henry’s carriage house which was located on Henry’s farm near 14th and Buckeye; and the original New Basel Church.

In recent months, the blacksmith shop (barn) and the two-story cabin were taken down for safety reasons, due to years of damage caused by termite and water.

The 1850s two-story cabin was taken down in April with the logs labeled and saved. Unusable logs will serve as templates for new hand-milled ones.

“Those hand-milled logs are trees right now,” Kijowski said. “We’ll hand-hone them and make the joints to rebuild.”

Hook said the Lenhart family, one of Dickinson County’s early families, is helping to rebuild the cabin. Board Secretary Joy Butler also hopes the blacksmith shop can be rebuilt at some point.

“If there’s anybody that has experience rebuilding cabins, we’d certainly love to enlist them,” Hook said. “Those cabins are pretty much the oldest buildings in Dickinson County right now. They were built before Kansas was even a state. That’s pretty incredible.”

Looking ahead, the board is interested in bringing other historic structures to Old Abilene Town. Among the possibilities is a home once owned by Joseph G. McCoy, the man who brought the cattle trade to town.

Butler noted the house, which is located in Abilene, still has its original fixtures.

“We would be moving it a third time, but we’d really like to move it back here,” Hook said.

The McCoy house was originally located on Northeast Third Street where the former Kirby House (which burned in 2013) was located. When Kirby purchased the property and built his mansion, McCoy moved his house next door. Later, Abilene Printing came in and the house was moved again.

Hook said having the McCoy house would give the man who put Abilene on the map his due.

“It’s sad to me that McCoy left town on bad terms. He left pretty much penniless. Even though he had this billion-dollar idea, he had nothing to show for it. We don’t even have a street named after him,” Hook said. “I’d like to see the guy get some credit. He was known as the ‘Real McCoy’.”

One of the places to visit back in the heyday of Old Abilene Town was the general store and the attached Wild Bill’s Hangout, a “fun house” for kids with slanted floors, water that ran uphill and a swing that appeared to go backwards. Both burned during a fire in the 1990s. Right now, the space remains vacant, occupied only by a cement slab.

OAT already has a museum area in the north end of the west block of buildings that features a miniaturized version of Texas Street, built by Roger Watt and Ronnie Phillips. Originally on display at the Dickinson County Historical Society, Watt and Phillips moved it to Old Abilene Town last year.

Texas Street was the main street of Abilene during its cowtown days, located across Buckeye west of the courthouse in the area where the Never Surrender MMA gym is now.

“We’re going to create a narrative to go along with it,” Hook said, speaking of the miniature town “You’ll push a button and it will tell you who the people were.”

While the COVID-19 pandemic has sent 2020 plans into a tailspin, OAT leaders still hope to have a good summer season. Earlier this week, they set a tentative opening date for Saturday, June 20, then the governor moved up phase 2 of her reopen plan allowing museums to open earlier.

But as of today, June 20 is still the opening date.

People can visit the Old Abilene Town Facebook page for updates and participate in a Facebook Live auction benefitting OAT on June 7. Many of the items to be auctioned were donated by vendors who attended Equifest Kansas earlier this year.

“We met a lot of fantastic vendors and artisans and we did get some one-of-a-kind things donated to us,” Butler said. “And we have some artifacts like from the blacksmith shop if people want some nostalgia to take home.”

The Historic Abilene board has a lot of ambitious plans, but money and people are needed to make them a reality. Volunteers are needed to help out in a variety of ways, whether that be greeting the public as a re-enactor or behind the scenes.

“It’s all about bringing this back to life,” Hook said.

Ellison said she likes to go down to the Merchants Hotel and greet people when it’s open.

“It’s lots of fun to talk to people,” she said, recalling an experience the last time OAT hosted a longhorn cattle drive. “I was standing on the porch with a lady from Fort Riley when all of a sudden those cowboys and longhorns came right past her. She was astounded and said ‘I have lived all over the world and have never seen anything like this!’

“You meet the most amazing people hanging out down there!”