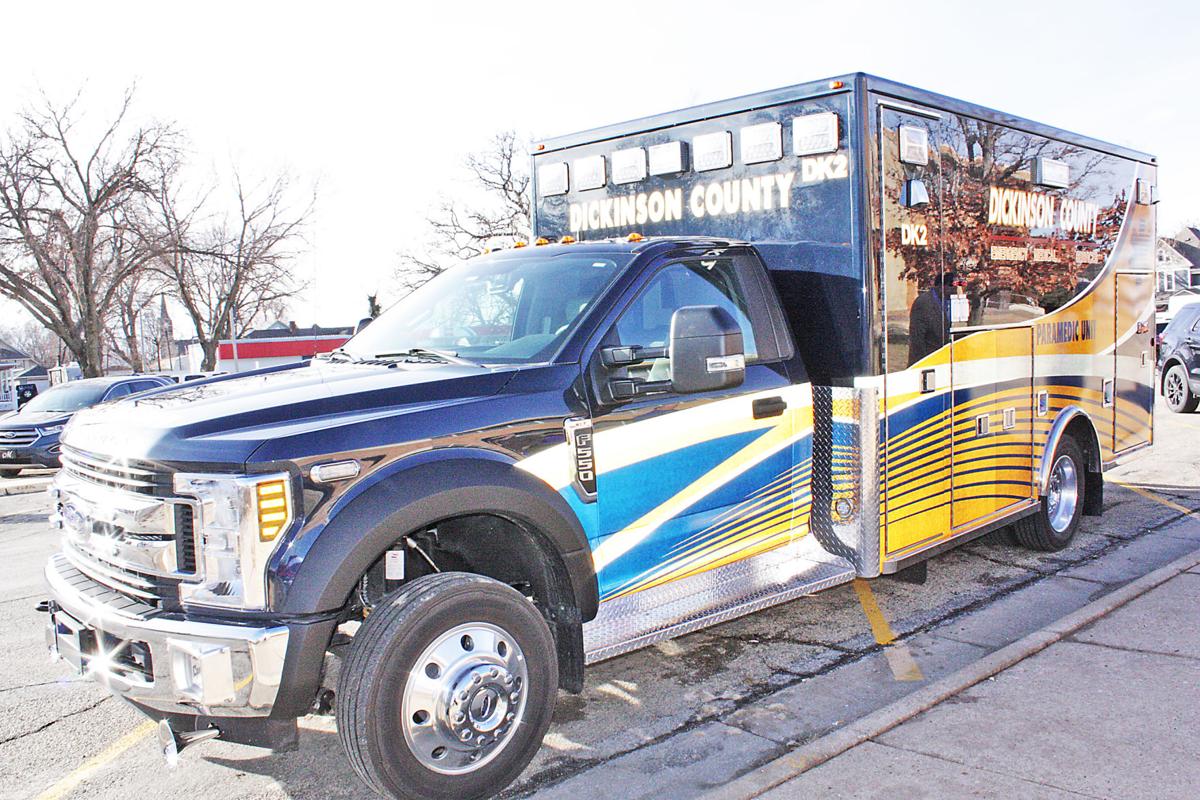 An old Dickinson County ambulance had its big reveal Thursday after getting an extreme makeover.  Rather than spending more than $200,000 for a new ambulance, the county saved an estimated $96,000 by remounting an old ambulance box onto a new truck chassis. The rehabbed ambulance has new LED lights, electrical systems, a Power-Load cot system and a snazzy blue and gold paint job — signaling a change from the white and blue stripe color scheme used in the past. 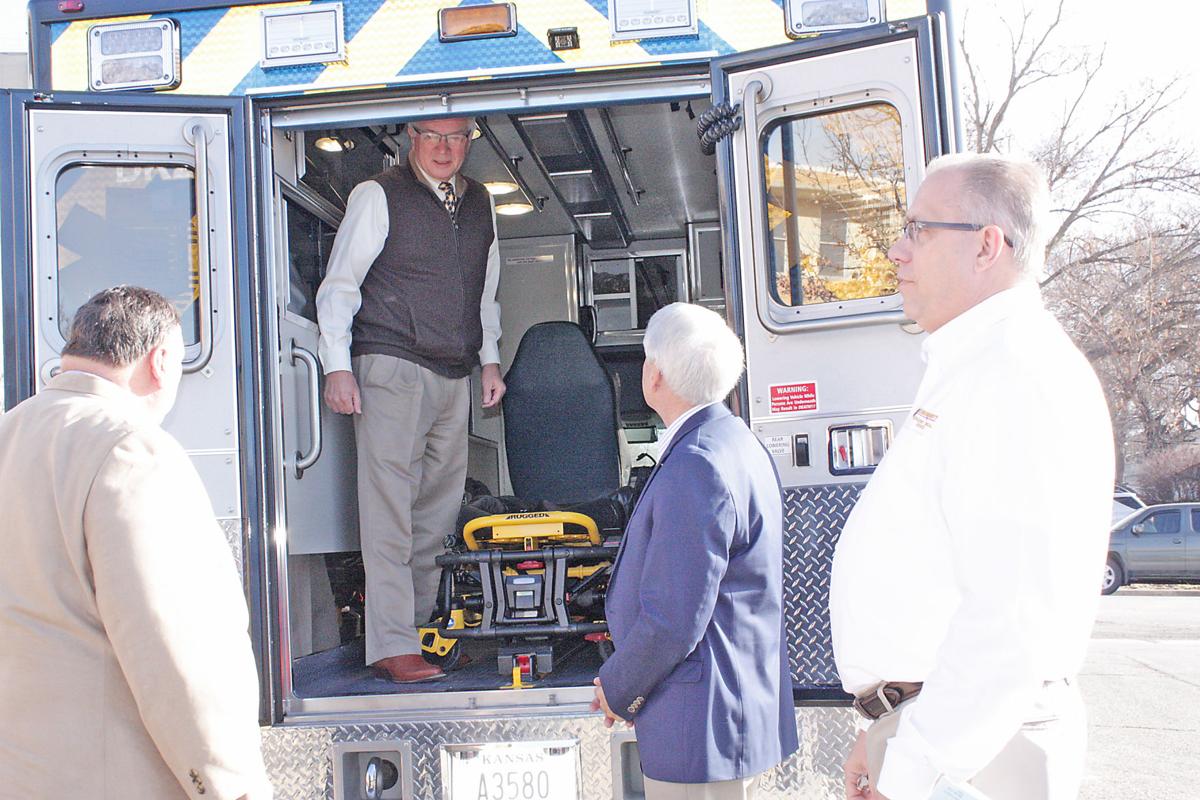 An old Dickinson County ambulance had its big reveal Thursday after getting an extreme makeover.  Rather than spending more than $200,000 for a new ambulance, the county saved an estimated $96,000 by remounting an old ambulance box onto a new truck chassis. The rehabbed ambulance has new LED lights, electrical systems, a Power-Load cot system and a snazzy blue and gold paint job — signaling a change from the white and blue stripe color scheme used in the past.

The box from a nearly decade old ambulance was remounted onto a 2019 Ford F-550 chassis, rehabbed with new electrical systems and LED lighting, equipped with a Power-Load cot system, had other needed work done and received a snazzy blue and gold paint job.

The new colors are a big change from the white and blue color scheme used in the past.

The entire remounting process took nearly a year which was much longer than anticipated.

Back in November 2018, the commission decided to remount an existing ambulance box onto a new chassis as a way of saving a significant amount of money. The last time the county bought a new ambulance was in 2017 and that cost nearly $252,000.

Since the chassis is the part of the ambulance that wears out, county officials made a conscious buying decision in recent years to only buy ambulances where the box on back can be removed and remounted onto a new chassis.

This was the first time Dickinson County took that route, although a number of Kansas counties and ambulance services had already used the process.

So a little more than a year ago, the county purchased a 2019 Ford 550 truck chassis for $61,635 from Olathe Ford Fleet Management. The dealership has the state contract for larger vehicles and is basically the only dealer in the state that is big enough to handle those trucks, Homman said at the time.

That price included the chassis plus an additional liquid spring system that produces a better ambulance ride.

The completed chassis was shipped to a plant in Comanche, Texas while local EMS employees drove the ambulance down. Once there, the ambulance box was removed from the old chassis and remounted, rehabbed with new LED lights, electrical systems, a power load cot and the new blue and gold paint job.

The county saved approximately $96,000 by remounting and rehabbing the old ambulance rather than buying a new ambulance, Hultgren said.

The savings also accounts for the installation of the power cot system that was not included in the estimated new ambulance cost.

Hultgren showed commissioners the features of the Power-Load cot, installed to improve safety when transporting patients and help prevent injuries to EMS personnel.

Although EMS personnel will still need to manually get the patient onto the cot at their home or the accident scene, they will not have to lift the individual into the ambulance, Hultgren explained.

“Back when I first started, we had these two-man cots. We had to take a patient clear to the ground, pick up the cot and patient,” he said. “The main thing we’re trying to do is eliminate injuries to personnel and it’s safer for the patient. We don’t want to injure anybody.”

This past September, county commissioners approved buying another new (2019) chassis for $46,500 from Olathe Ford to remount another old ambulance instead of replacing it.

The remount and rehab for that ambulance will occur this year.

The rehab for the second ambulance will be done in Missouri by Osage Ambulances. In the year since the first rehab was approved, the Osage company has started remounting.

While the first remount and rehab took about 11 months, the one that will be completed in 2020 should take only three or four months, Homman said.

As for work on the new jail project, Homman told commissioners:

* Sanitary sewer lines are completed, cast iron lines that will go from the kitchen to the grease traps were expected to be completed last week and storm drains are in the process of being connected to drains on First Street.

“When they do that, they will have to dig in front of the county attorney’s office,” he said.

* The UPS (Uninterrupted Power Supply) system has been installed in the courthouse basement that will serve as battery backup for all computers in the jail and courthouse when the projects are completed.

* Structural steel is now in Salina waiting to be delivered.

* Work continues in the old garage area which formerly was used by the sheriff’s department in preparation for concrete to be poured.

* New project estimates show the jail being completed by November 2020.

“Things are progressing well, although it seems slow, but I think it’s typical of any project of that magnitude,” Homman said.

Following a five minute executive session, the commission approved accepting a settlement with Insys Pharmaceuticals in regards to a class action lawsuit the county is participating in against opioid manufacturers.