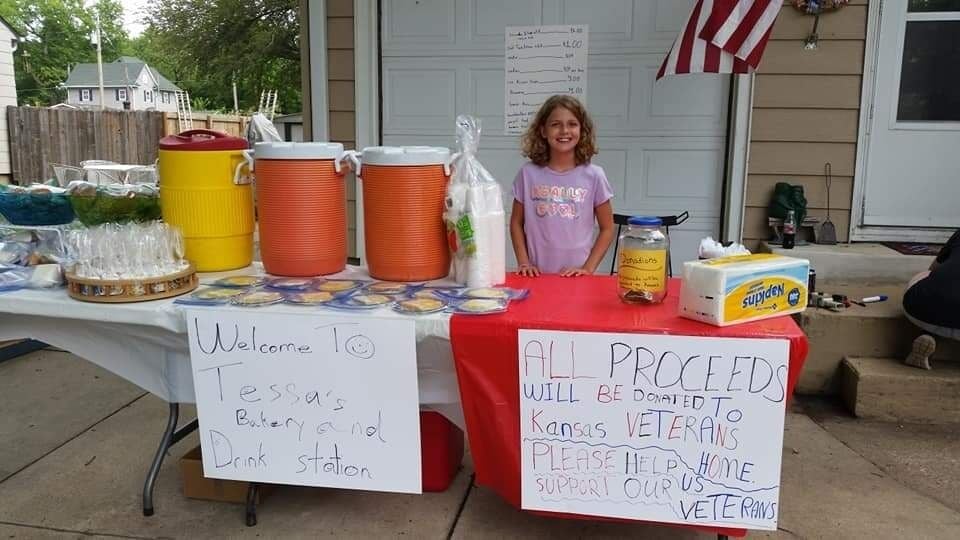 Tessa McConville got up early to prepare her lemonade stand on June 27 and made sure to have a variety of treats for her customers. As an Auxiliary Junior member of the American Legion, Tessa spent her time helping veterans and wanted to take the extra step of raising money to donate. 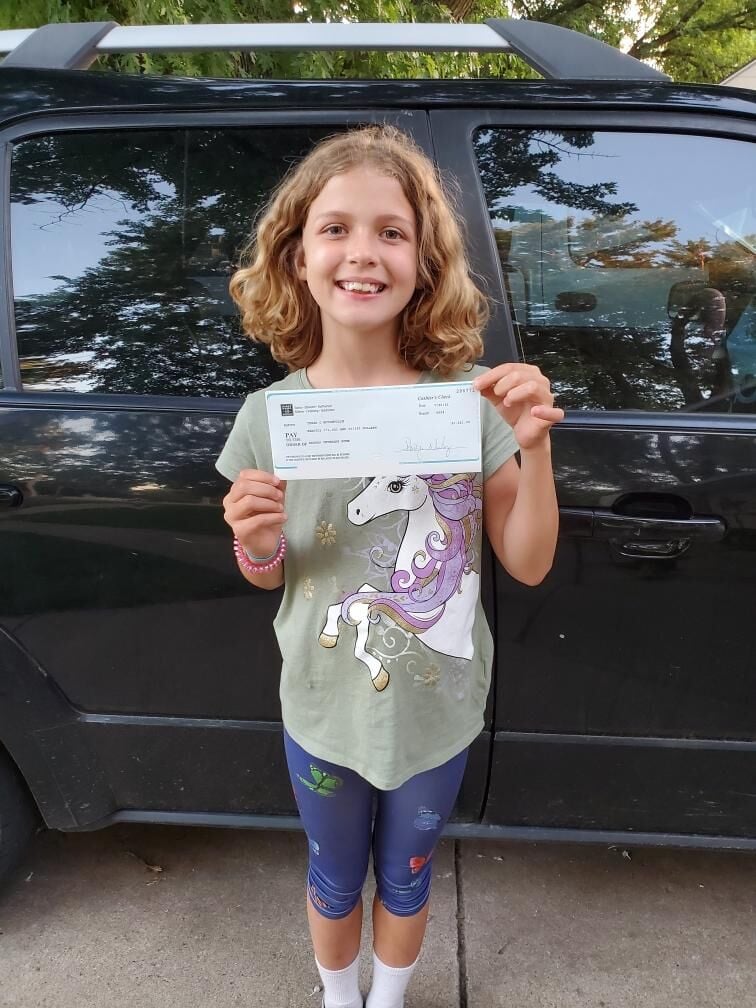 At the end of the lemonade stand, Tessa raised $886 and her parents were amazed by the amount. Over the following days, more people donated money to Tessa’s cause, so she got to give the Kansas Veterans Home a $1,021 donation.

Tessa McConville got up early to prepare her lemonade stand on June 27 and made sure to have a variety of treats for her customers. As an Auxiliary Junior member of the American Legion, Tessa spent her time helping veterans and wanted to take the extra step of raising money to donate.

At the end of the lemonade stand, Tessa raised $886 and her parents were amazed by the amount. Over the following days, more people donated money to Tessa’s cause, so she got to give the Kansas Veterans Home a $1,021 donation.

Nine years old and already making a difference, Tessa McConville turned a classic childhood moneymaker into a donation for the Kansas Veterans Home.

“I just thought because we’re part of the Legion, I just wanted to support our veterans,” Tessa said.

Tessa’s father and uncle are both riders for The American Legion at Abilene Post 39. Overtime, Tessa became the first member of the Auxiliary Juniors.

“I was the first one,” Tessa said.

“We found out later after she started getting more and more active with our riders,” Tessa’s mother Ashley McConville said. “They were like she could go into the Auxiliary Juniors.”

“She was the first one in our area,” Ashley continued.

So with the desire to help veterans and to run a lemonade stand, Tessa went to her mother to ask for help and permission.

“When she said she wanted to have a lemonade stand, I told her she needed to let people know where that money was going - what she wanted that money for – so we could have more success with it,” Ashley said.

“I wanted to help veterans, usually other kids just want to do it to get their money,” Tessa said.

So on June 27 at 11 a.m., Tessa opened her stand for business, until 5:30 p.m. when her parents told her to come inside for dinner. Tessa sold an array of drinks and treats either baked by her family or Auxiliary members. The three tables held lemonades, tea, cinnamon rolls, marshmallow pops, cookies and more.

Tessa’s favorite item on the menu happened to be the rice crispy treats.

While her parents posted about the lemonade stand on social media and created signs pointing to the stand, Tessa took on her duties to bring in customers.

“I was just sitting behind the counter and then mommy said go wave so maybe we get some more customers,” Tessa said. “I started to wave and I got more customers.”

The customers, Tessa remembers the most came from work and church.

“We had a tractor that was like, “Come Here,” and he gave me money, but he didn’t want anything,” Tessa said.

“At the beginning, like after church ended, like a lot of people started coming out, like a big bunch of people and they were in nice clothes, so you could see they went to church,” Tessa continued.

Overall, Tessa and her family spent the day selling everything until only a little bit of drinks and cookies were leftover.

“It was really awesome, at times, it got a little overwhelming.” Ashley said.  “You got a lot of people around, but it was exciting for her.”

With the lemonade closed for the day, Tessa counted up $886; which, surprised her mother “when we counted it up that night, and she had $886 I was like holy cow, totally blew me away.”

However, the number started to grow when more people donated and in the end Tessa arrived at Kansas Veterans Home in Winfield with $1,021 donation.

“So we actually had people that day that we were driving down there, I had messages coming through, “hey we want to donate,” Ashley said.

At the Kansas Veterans Home, Tessa got to meet with three veterans living at the residence and they gifted her with a thank you bag & certificate for her hard work. Tessa remembered to bring down the leftover drinks and cookies for the veterans to take part in the sweet treats.

Tessa hopes to do another lemonade stand, but until then she has some advice for those who want to do the same project.

“We had so much fun and if they want to do a lemonade stand to have fun,” Tessa said. “And it takes like 200 years to make all the goodies.”