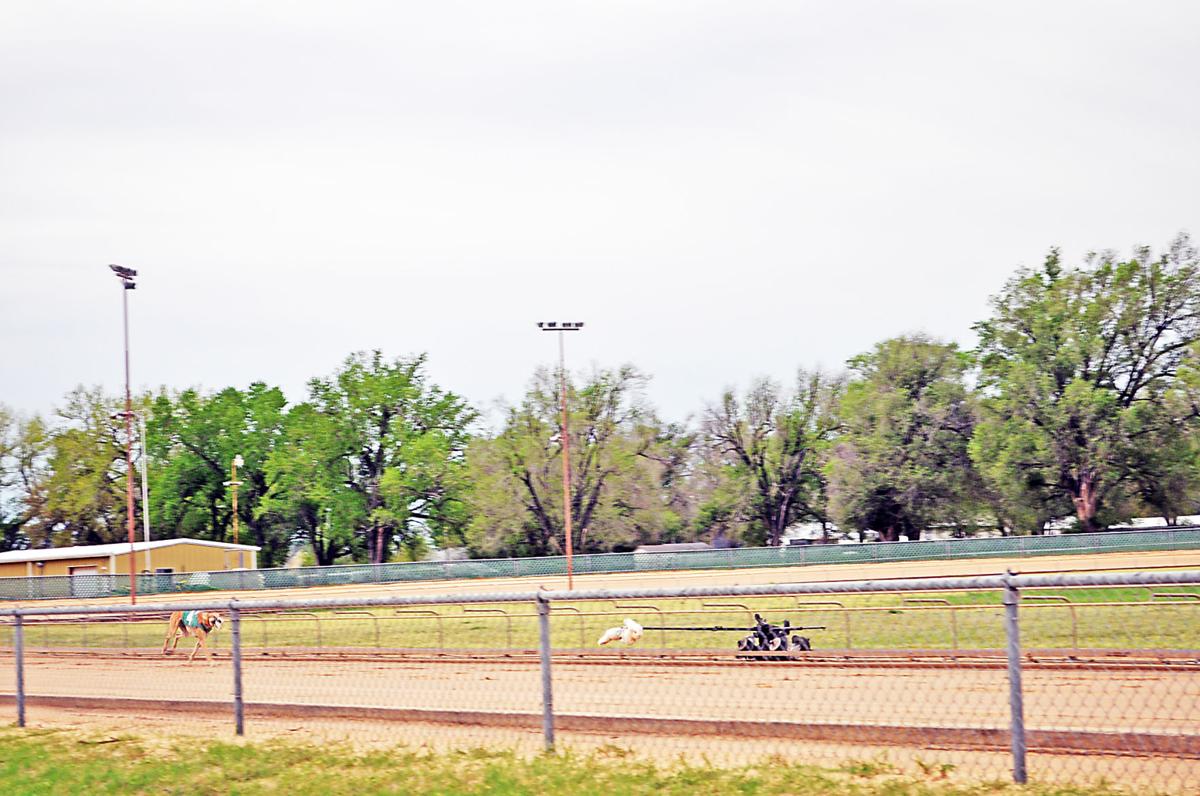 The rapid thud of Greyhound paws echoes across the racing field at the National Greyhound Association the morning of April 21 during schooling races held the week before the annual Spring Meet, a week of Greyhound races and events for Greyhound owners. During the schooling races, the dogs are timed while they become familiar with the race track and chasing the artificial lure. At these races, they are not assigned a number and do not generally wear the attire they will don during race week.

Russell Neely may be retired, but he is still a part of the Greyhound community. Neely currently maintains the time clock he built for the National Greyhound Association and helps the official timekeepers connect their computers to the wiring that he installed. He also puts together artificial lures to train Greyhounds. His lures are sold to kennels and donated to good causes and facilities like the National Greyhound Hall of Fame as an example of how the dogs are trained in modern racing.

The National Greyhound Association is a big part of the economy here in Abilene. People come from all around the world to race their dogs and sell them at auction.

They come to see the Hall of Fame and visit with friends, and some even wind up staying, like Russell Neely. He fell in love with the small town and the quietude of life in the country while raising families, both human and Greyhound, on a 20-acre farm.

Neely, who has been in Abilene since 1978, can usually be seen during the week of the schooling races and during the meet at the National Greyhound Association track. There, he spends his time before the races begin, checking the wiring for the timer he built and installed to clock each heat. During the meet, a third-party official times the races using a clock provided by them, but it’s connected to the wiring installed by Neely.

Before Neely and his family came to Kansas, they lived in Pennsylvania, raising and training English Setters to hunt fowl. He used the knowledge he had on raising canines when his wife began training Greyhounds at a Sarasota, Florida, race track. Neely was working as a mechanic at Tropicana during that time, and he lent his time to help her run the kennel and train them to race.

While training and raising Greyhounds, Neely learned about the use of vaccines and probiotics. Diseases like Parvo and E-Coli cause scar tissue to form in the stomach and intestines of the dogs. After they heal, they aren’t able to race because the long stride requires the dog to stretch its body out, which causes the scar tissue to tear. With the use of probiotics, Parvo and E-Coli illnesses are no longer an issue and they help the dogs race better because it improves body functions. The positive results from the use of probiotics in Greyhounds caused Neely to begin using (the human version of) probiotics.

Neely and his family came to Abilene in 1978 because they saw Greyhounds were sold at auction for five to 10 times more than the $3,000 to $5,000 they were selling for in Florida auctions. The 20-acre farm they bought was not just used for raising Greyhounds. Nine acres was leased to surrounding farmers for planting until the farm was sold in 2003.

Neely’s favorite part of being in Abilene and part of the NGA is being surrounded by the people who are a part of those communities. Maintaining an 11-acre Greyhound kennel and training them was a 24-hour-a-day, 7-day-a-week job. In that time, he found moments of pleasure from fishing in the creek across the road from his home to moments of success in training Greyhounds.

“When you’re training them, the dogs, you know they’re just out there going through the numbers, like learning cadence. And then, there’s that day, they turn around and they look you in the eye, and they got a sparkle in their eye, and from that day on, they keep getting better and better. When you see that sparkle and that tail (wagging) you know that they are enjoying what they’re doing and they’re ready to go and they’re ready to run,” Neely said.

As with many animal owners, there were dogs that made lasting impressions. Neely said the first born in a litter is usually the best race dog, but the runts in the litter are the characters. “Wait for the Beep” was one; affectionately known as “The Beep,” she was a runt who did have her day at the races. While she didn’t qualify to race, she was a favorite at the track and in the kennel. Neely recounted how people who knew them would ask to adopt “The Beep” every time they saw her because she was so adorable.

These days, Neely finds the time to be active in the community outside of the NGA. Besides maintaining the time clock during meets, he also makes artificial lures that are sold to trainers and kennels to train Greyhounds, because they use sight, rather than smell, to catch their prey. The lures are donated to good causes like charity auctions and facilities like the National Greyhound Hall of Fame where the lure is on display as an example of what the dogs chase.

He participated in the Eisenhower Marathon April 8 and took second place in the 70+ division with a time of 40 minutes, 09 seconds. His next adventure, when he’s not running five miles every morning, will be to go skydiving.

“Every time there is a change in your life, it’s like a book. A change is starting a new chapter. A lot of people look back and worry about what happened back then. When you start a new chapter, you keep going on. And another chapter starts and you keep going on. I never dreamt that I would run (in the Eisenhower Marathon). Just keep going and enjoy the people around you. That’s what life’s about,” he said.