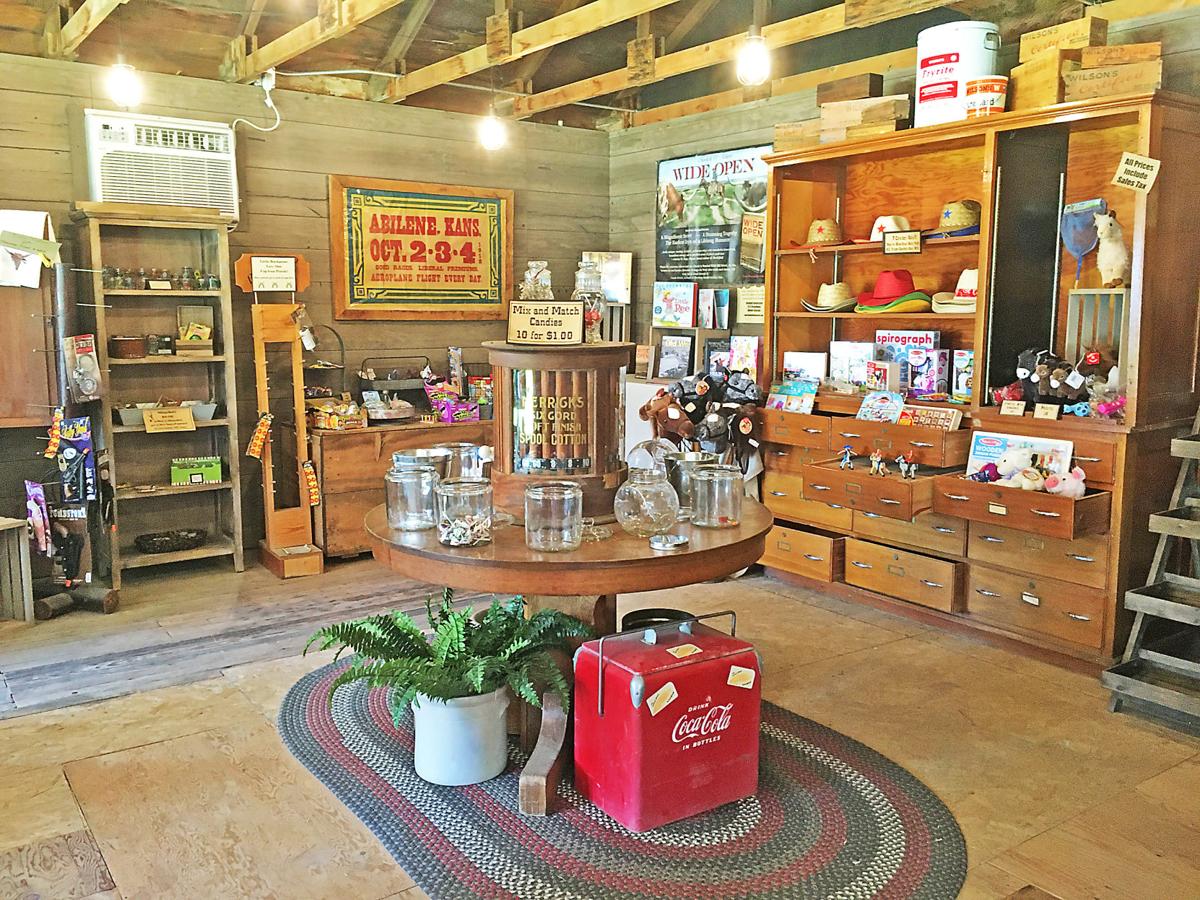 A General Store was open for business last season at Old Abilene Town and includes a variety of items. Other areas are available for vendors or businesses offering western themed items. 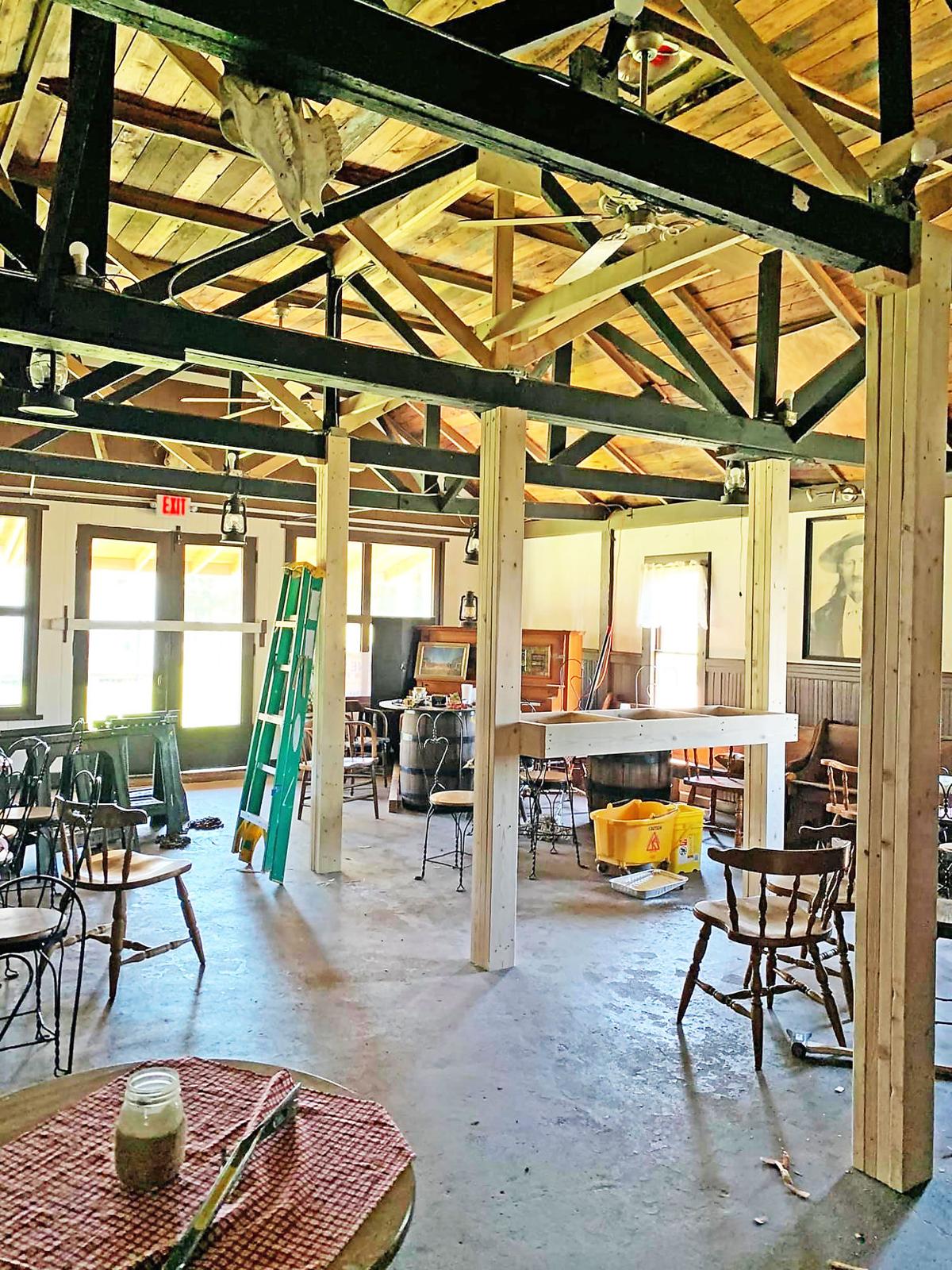 Bottom: While tons of work has already been completed at Old Abilene Town, some work is still ongoing. Here, pillars help support the roof of the Alamo Saloon which is in need of repair. 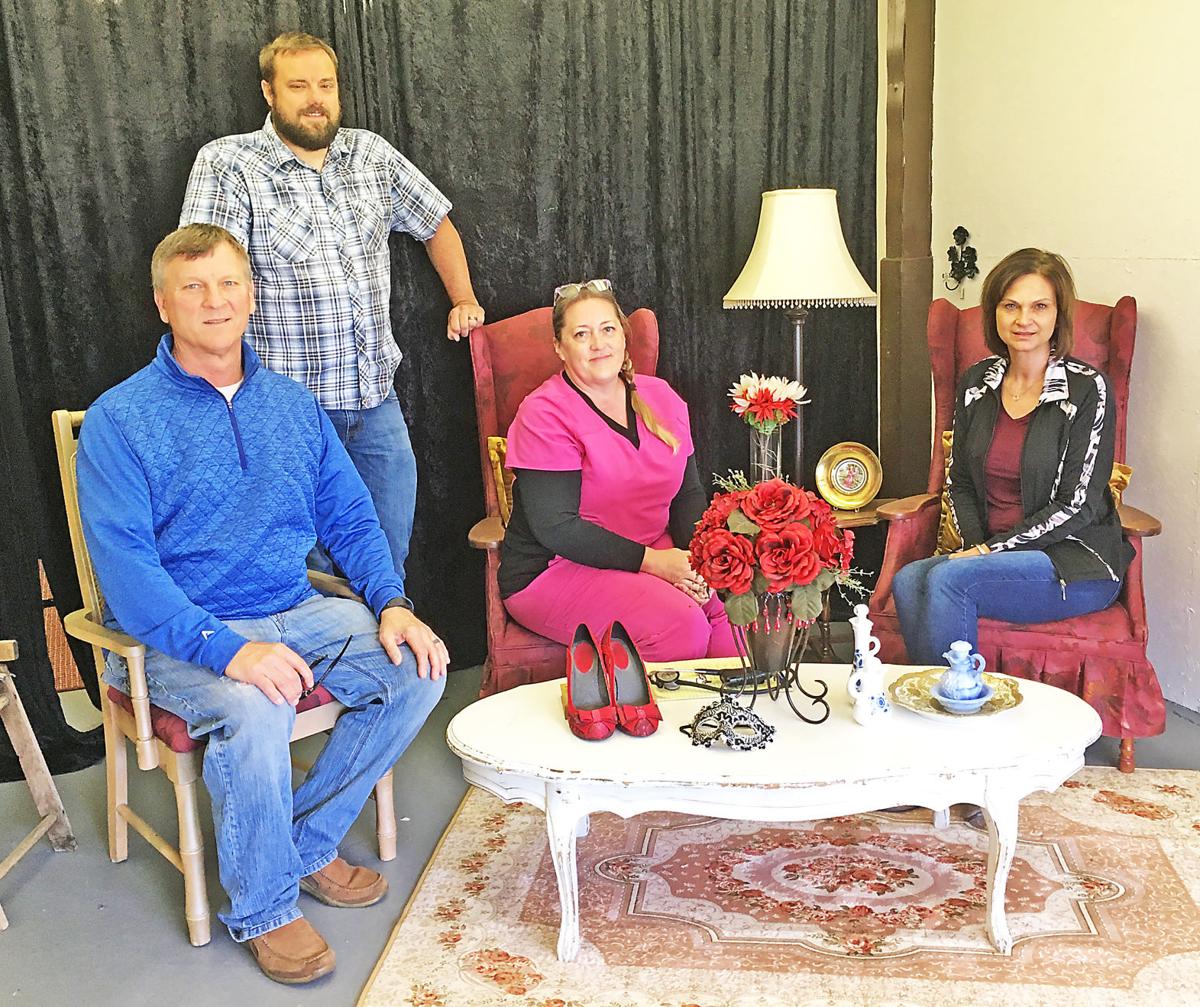 Several members of the Old Abilene Town Board of Directors sit inside an area currently being used as a vintage photo studio where visitors can have their picture taken in period costumes. Seated from left are Andrew Kijowski, Joy Butler and Lisa Kijowski. Standing is Michael Hook.

A General Store was open for business last season at Old Abilene Town and includes a variety of items. Other areas are available for vendors or businesses offering western themed items.

Bottom: While tons of work has already been completed at Old Abilene Town, some work is still ongoing. Here, pillars help support the roof of the Alamo Saloon which is in need of repair.

Several members of the Old Abilene Town Board of Directors sit inside an area currently being used as a vintage photo studio where visitors can have their picture taken in period costumes. Seated from left are Andrew Kijowski, Joy Butler and Lisa Kijowski. Standing is Michael Hook.

Reporter’s note: After a several decade slide into decay, Old Abilene Town has been brought back to life thanks to a dedicated group of board members, volunteers and donors. This first story addresses some of that comeback and plans for the iconic tourist attraction.

If you haven’t been to Old Abilene Town in awhile, you need to make sure it’s on your list of places to go this summer — once restrictions are lifted due to the COVID-19 shutdown.

In recent years and months, the town has been brought back to life.

Outside, the changes are easy to see: Buildings have been painted in bright colors, a new black fence was installed around the perimeter and new “period-looking” lighting illuminates the front and back of structures.

Missing on the north side of the complex are the former Blacksmith shop and the two-story cabin which fell victim to termites. Gone for now, but not forever, the logs of the 1850s cabin were numbered and labeled before the structure was dismantled in April to be rebuilt in the future.

The Merchants Hotel has been renovated and furnished and the bank of buildings on the west side have been renovated, refurbished and are useable for the first time in years.

“At one point there were only two buildings here you could even get inside,” explained Old Abilene Town (OAT) Board President Michael Hook. “The fact this board had the energy and drive to take it upon themselves and get it put back together is the only reason we have everything back up again.”

The 11-member board, with help from some dedicated volunteers and donors, has worked diligently in recent months and years to save the town. Their goal is to bring it back to the fun, exciting place many Abilene residents remember.

“Back when we were kids Old Abilene Town was the place you’d jump on your bike and go to,” said board Vice-President Andrew Kijowski. “We just want to have people coming in and out of here all the time.”

Heyday of the cowtown

Old Abilene Town was built in 1957 by a group of Abilene area businessmen who wanted to create an authentic replica of Abilene by depicting what it was like in the roaring heyday of the Chisholm Trail and the cattle trade.

While most of the town consisted of replica buildings, a number of actual historic structures were moved to the location, including the log cabins and schoolhouse.

The tourist destination flourished for several decades, but over the years interest in the Wild West waned, the main business — The General Store — burned down, taking with it the popular Wild Bill’s Hangout — a carnival-like funhouse, crowds dwindled and the complex fell into disrepair.

Concerted efforts began in the 2000s to bring OAT back to life and by 2016 it became the location for the annual Chisholm Trail Days, a three-day festival celebrating the history of the famous cattle trail that put Abilene on the map.

Despite hosting a busy festival each year, many of the buildings were still unusable, but that has changed.

Earlier this month, four members of the OAT board of directors gathered around the dining room table in the renovated, refurbished Merchants Hotel to talk about what’s been accomplished and what still needs to be done.

All expressed disappointment that OAT was unable to open for the season on May 2 because of the COVID-19 shutdown. 2020 was going to be a big year for Old Abilene Town.

Plans included a full slate of fun activities, including a Cowboy Camp for kids, a “Living Town” for young teens where they would take on the jobs of townsfolk while learning concepts like finance and budgeting. Also on the agenda were Wild West murder mysteries, movie nights, First Friday night of the month events like karaoke or live music, bingo and other events, plus Chisholm Trail Days over the Labor Day weekend.

Like many other events this year, some of those plans had to be scrapped. Now board members hope to open the buildings on Father’s Day Sunday, June 21, then bring out the can can girls and gunfighters over the July 4th weekend, but that’s all subject to change.

Members are still planning to host a scaled back version of Chisholm Trail Days in September.

Once Old Abilene Town gets going again, the can can girls and gunfighters will again take center stage, but the shows are not what they used to be. They’re better.

Traditionally, the can can girls have been high school age students, but now most anyone can participate if they tryout.

“Right now, there’s a maturity about it (can can dancers). We will take just about anybody,” said Board Secretary Joy Butler. “We want the community to be involved.”

Also changed are the gunfights. They are no longer ad-libbed. Last year, Hook and Board Member Lisa Kijowski wrote a script that tells the history of Abilene.

Hook reads the script over the new sound system which was installed outside and the gunfighters re-enact it.

“I’ve seen people watching on the street who look at each other and say, ‘Oh, I didn’t know that!’” Butler said. “Hopefully, they will get a better appreciation of history. And it’s neat seeing something spark in the younger people.”

Hook said the script still needs some fine tuning, but the board also hopes to add other “history re-enactments.”

“Abilene has its history, but Abilene is also part of United States history with the Chisholm Trail and other things,” Lisa Kijowski explained.

“People need to realize what the little town of Abilene brought to the world,” Andrew Kijowski added. “Some modern day businesses are still in operation because of Abilene.”

That includes AT&T, which was Sprint that originated as one of C.L. Brown’s United companies, and Evergy (electric company) which also traces its roots back to Brown.

Hook has created a program entitled, “The Three Empires of Abilene,” which he enjoys presenting when “anyone needs a program,” he said with a laugh. It covers all areas of Abilene history, but mostly focuses on the cowtown days of 1867 to 1871.

Besides creating a means to present programs and public announcements, the new sound system provides a fitting backdrop to the western town by piping player piano music throughout the complex along with a soundtrack of just about “every western song” ever recorded.

Besides the dancers and gunfighters, stagecoach or carriage rides are available when OAT is operating, provided by Paige Westfall of Wild Heart Carriages.

“Paige is here, unloading her horses and mules pretty much every weekend,” Hook said.

“To meet the demand, she’ll bring in her own personal wagons or carriages,” Butler added.

Despite the setback caused by the pandemic, the board used the time to work on the facility.

A big part of that has been reclaiming the buildings on the west side.

The anchor on the south side is the Alamo Saloon, but a new swinging door just west of the stage leads to the other buildings that house a dressing area for the can can girls, a card room, a meeting area and a vintage photo studio.

While it will be used on weekends when events are taking place, planners also hope it will become a venue for groups and organizations during the warmer months of the year.

The reclaimed space, which now includes a new bathroom, was made with repurposed material that came from the old Blacksmith shop, Andrew Kijowski said.

Back in the day, the new spaces were part of the Ranch House Restaurant that stretched across what appears to be several buildings on the outside.

“We are looking at making it a venue that people could rent for the evening and basically still have access to the Alamo,” Hook said. “The key to making it year round is installing HVAC.”

But that is yet to come, depending on donations.

Butler said the reclaimed area could potentially be used as retail space on weekends when the facility is open.

“Anything could have a western flair added to it,” Butler said. “If you’re a full time craft vendor and you need a permanent seasonal place. We hope to bring in artisans and have street demonstrations for their craft.”

Part 2 will address the renovation of the Merchants Hotel, potentially bringing other historic buildings to Old Abilene Town and other information.