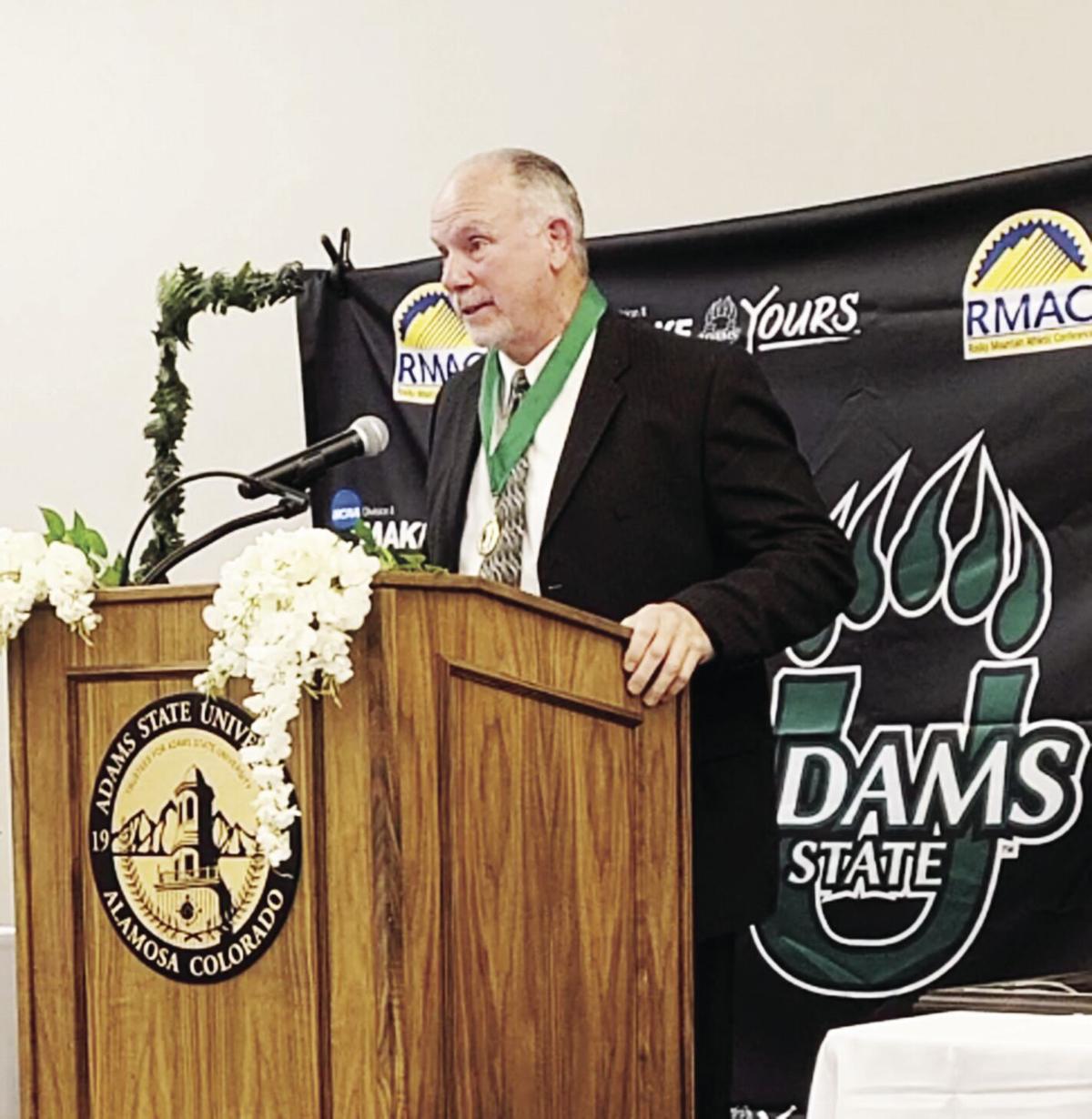 Shane Palmer makes a speech at his alma mater, Adams State College, during a ceremony earlier this month where he was inducted into the school’s Athletic Hall of Fame. Palmer graduated from Abilene High School and would later go on to distinguish himself as a college wrestler and a wrestler in the United States Army before coming back to Abilene to coach at AHS. 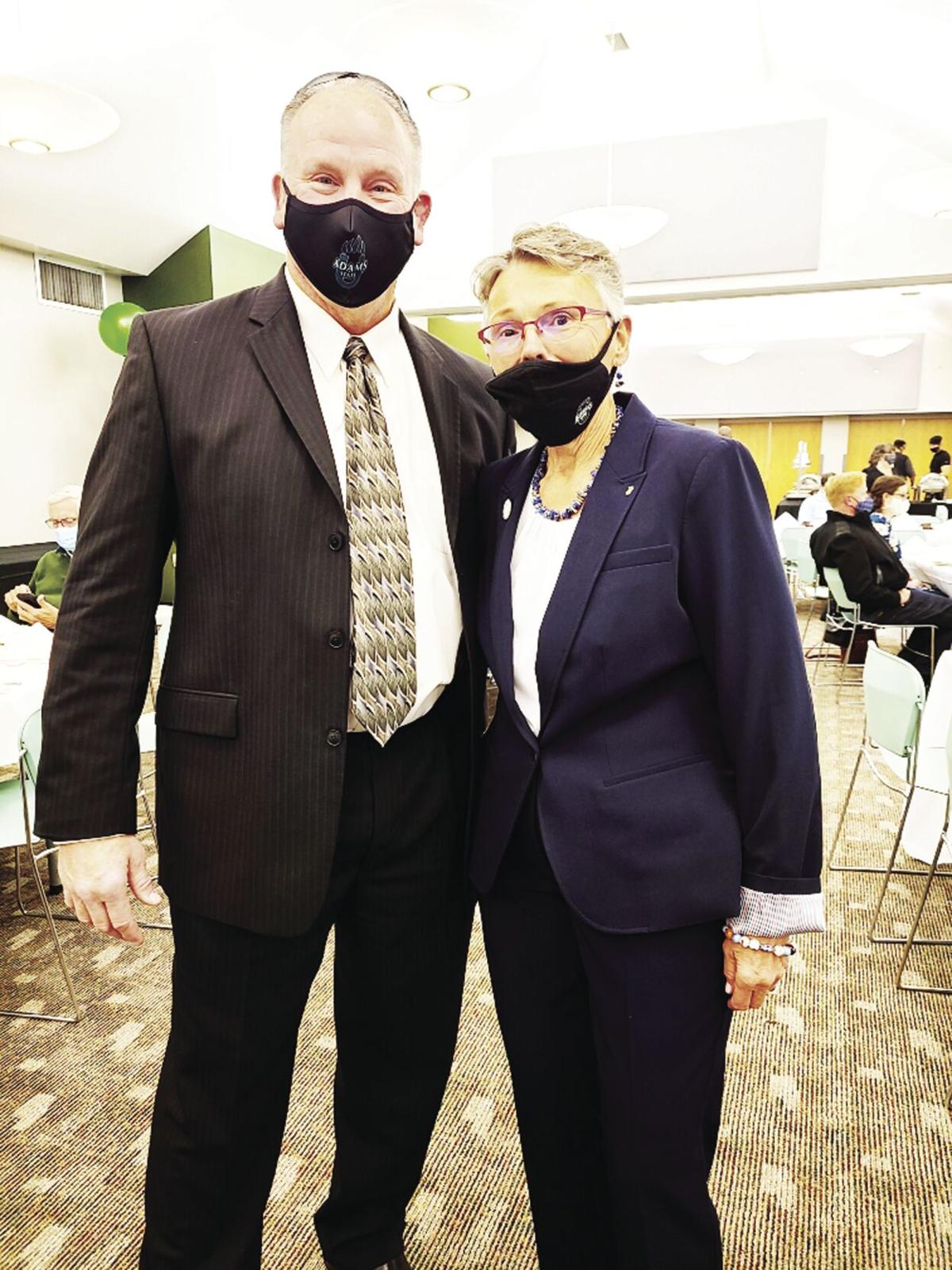 Shane Palmer, formerly of Abilene, stands with President of Adams State College Cheryl Lovell at a ceremony where Palmer was inducted into Adams State's Athletic Hall of Fame. 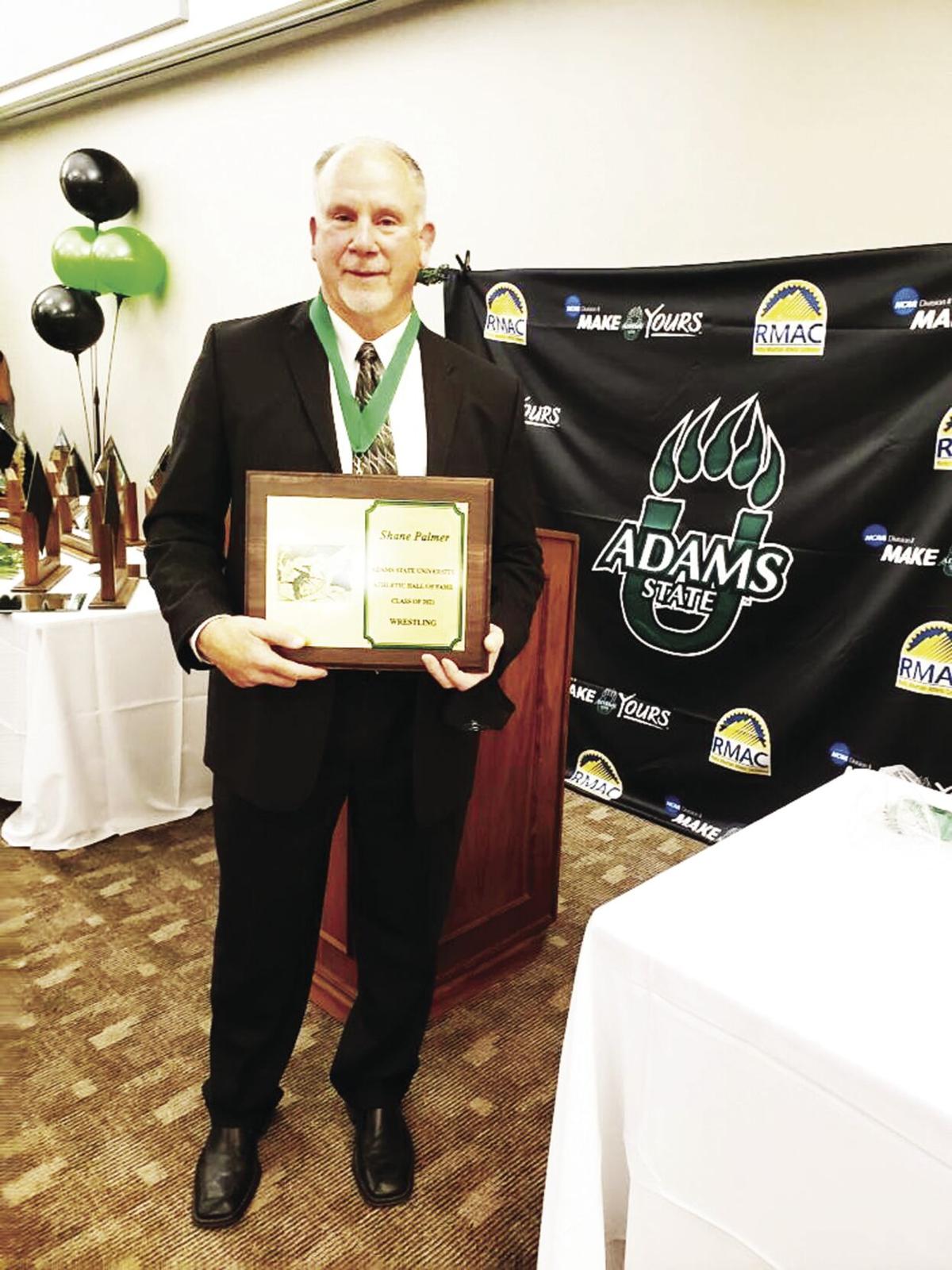 AHS graduate and former wrestling coach Shane Palmer holds a plaque at Adams State College at a ceremony where he was inducted into the Athletic Hall of Fame.

Shane Palmer makes a speech at his alma mater, Adams State College, during a ceremony earlier this month where he was inducted into the school’s Athletic Hall of Fame. Palmer graduated from Abilene High School and would later go on to distinguish himself as a college wrestler and a wrestler in the United States Army before coming back to Abilene to coach at AHS.

Shane Palmer, formerly of Abilene, stands with President of Adams State College Cheryl Lovell at a ceremony where Palmer was inducted into Adams State's Athletic Hall of Fame.

AHS graduate and former wrestling coach Shane Palmer holds a plaque at Adams State College at a ceremony where he was inducted into the Athletic Hall of Fame.

It was never Shane Palmer’s goal to end up in the Wrestling Hall of Fame at his alma mater.

But that’s exactly what the former Abilene High School wrestler — and later AHS wrestling coach — did early this month at Adams State College in Alamosa, Colorado.

“It seems a little surreal,” Palmer said. “It hasn’t really sunk in.”

He hadn’t quite wrapped his mind around it, but said many people — including people he doesn’t even know — had congratulated him on the achievement.

It didn’t feel like a big deal to him, Palmer said, having wrestled in the college national finals during his time at Adams State he doesn’t tend to get overexcited about these kinds of things.

When Palmer started out wrestling competitively as a child, he just wanted to play the sport.

He was in middle school when he started wrestling and he was not particularly good at it at first, he recalled.

Palmer remembers himself as a “skinny, lanky kid” who wasn’t terribly coordinated. He gained in size and as a high school freshman found himself wrestling with high school seniors who had more experience and maturity than he did.

But he worked hard to improve and in time, he honed his skills.

That drive led to him making the varsity wrestling team at AHS at the end of his freshman year in high school.

“Wrestling’s hard,” he said. “You don’t have 10 other guys or four other guys that (have) got your back in case you’re not performing well or not feeling well … You’re out there all by yourself and so you have to do it all by yourself — and in life, that’s kind of the way it is.”

Palmer credits his achievements to hard work rather than raw athletic talent.

“I put in the miles,” he said. “I put in the hard work. That’s an old-style philosophy … I never thought of myself as ‘good.’ It’s just — I’m going to work hard, I’, going to try my best and let the chips fall where they may.”

He worked on his techniques all year long, even during summer vacation, he recalls.

“I would try to improve my craft by going to camps, learning different techniques,” Palmer said.

He refused to let anyone outwork him and tried to stay “mentally tough.”

This time and effort had positive results for Palmer, allowing him to win over people who by all physical appearances should have been stronger than him.

In the end, work ethic almost always won out.

“Don’t let any outside source ever discourage you from doing what you want to do,” Palmer said. “If you work hard at it, you can accomplish pretty much anything.”

When he was a junior in high school, AHS won the state championship, Palmer said.

He went on to compete on the college level.

When he signed to wrestle for Adams State, Palmer had never even visited the campus, he recalls. Two of his coaches had wrestled for Adams State and encouraged him to go.

He wrestled for them for two years after wrestling at the junior college.

Palmer was struck by a car while running his freshman year of college. He said he spent five days unconscious in the hospital. No one knew where he was and no one could identify him because he didn’t have any form of identification on him.

“I was a John Doe in the hospital for five days,” Palmer said.

The incident took him out of commission for the rest of the semester. He ended up needing knee surgery.

However, Palmer persevered and ended up at Adams State.

In college, Palmer competed in the national finals twice where he won once and placed second the next year.

“I lost my last college match,” he recalls. “I was a little stunned by it.”

He had aspired to be a two-time national champion and to compete in the Olympics, neither of which panned out.

After a short hiatus from the sport, Palmer went into the Army, where he took up wrestling again, this time competing against Pan American champions and Olympic bronze medalists.

Competing on that level helped him, he said.

During his time in the Army, he won a world silver medal and a world bronze medal.

Eventually returned home to Abilene where he coached AHS wrestlers to four state championships. Palmer taught them the same things that helped him in his wrestling career — to work hard and be mentally strong.

“I’m training them to beat the kid that they’re not supposed to beat,” he said.

He has survived physical injuries and the death of his oldest son to a car crash involving a drunk driver, he said.

These days, Palmer lives in Kansas City and has fully retired from wrestling. He still enjoys watching the sport, but he neither competes nor coaches. He doesn’t believe he’ll ever take coaching back up again.

The techniques have changed since he was a coach and he does not feel he is well-versed enough in the new techniques to teach them to others.

“Wrestling is an evolving entity in itself and it changes,” he said.

Adams State has evolved as well since Palmer last set foot on the campus roughly 40 years ago.

Palmer said it was a strange experience to return for his Hall of Fame induction.

“Don’t ever give up,” Palmer said. “Don’t let anybody outwork you … Wrestling is not for everybody, but just like anything else if you stay after it and work hard, doors will open and you’ll achieve a lot of things. It’s true for a lot of things.”