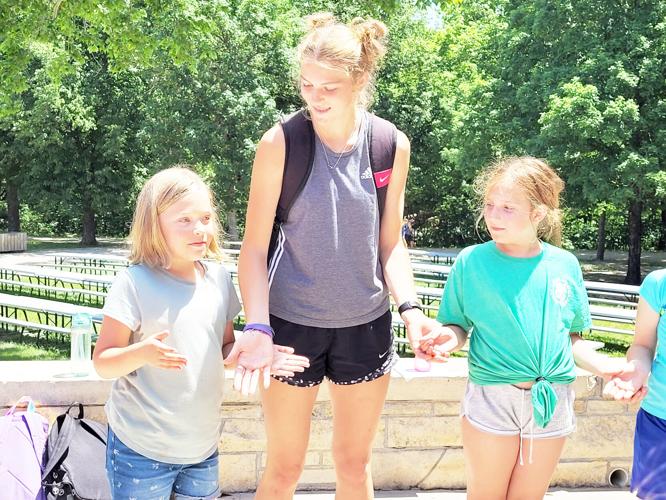 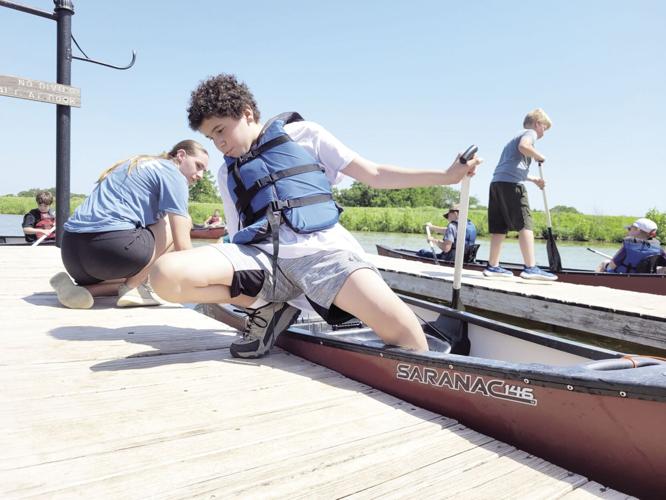 Sean Gonzales age 12 of Wichita exits a canoe last week at Rock Springs 4-H Camp while Counselor Jennifer Boucher helps his partner, Dylan Sousa age 11 (not pictured), of Wichita out of the canoe during a camp activity. 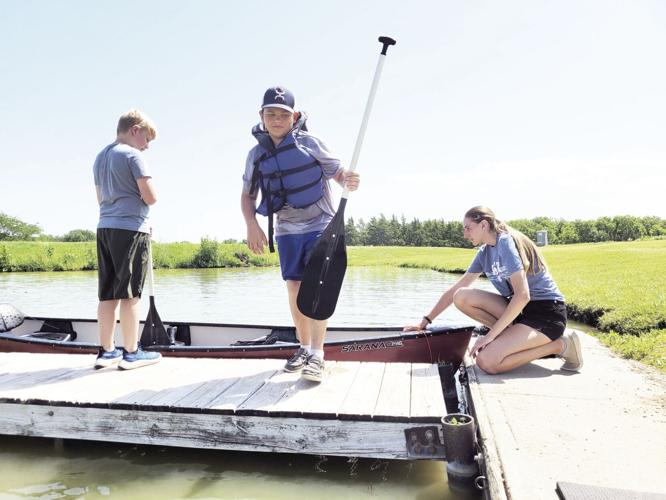 Pictured from left to right: Kyson Griffin, age 11 of Salina and Wesley Pried of Canton exit the canoe with help from Camp Counselor Jennifer Boucher last week during 4-H camp at Rock Springs. Rock Springs is located partially in Geary and partially in Dickinson County. Wednesday is the last day of the current session. 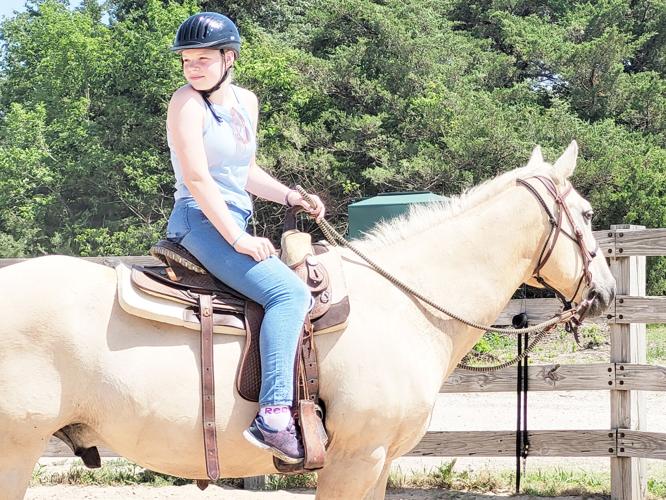 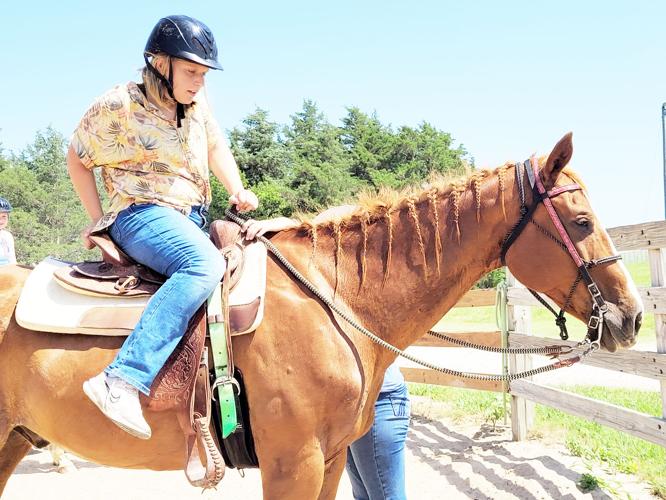 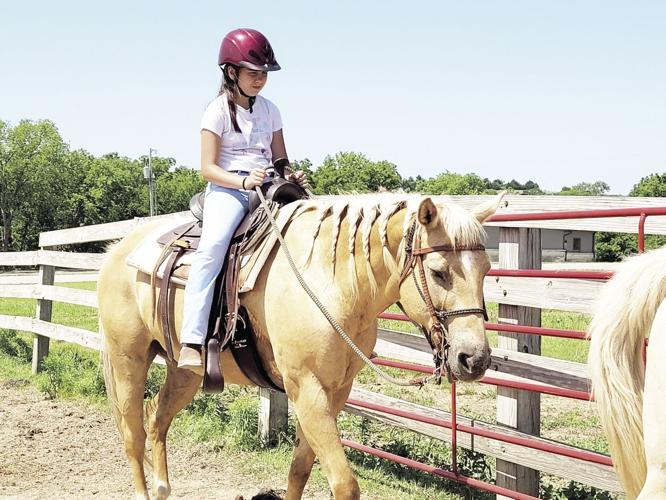 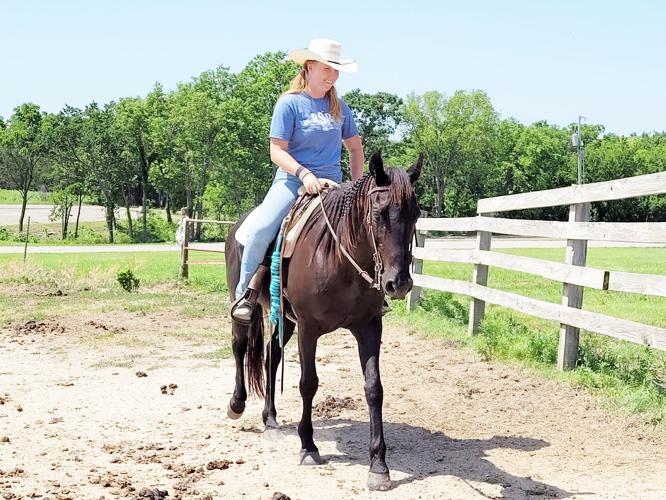 Sean Gonzales age 12 of Wichita exits a canoe last week at Rock Springs 4-H Camp while Counselor Jennifer Boucher helps his partner, Dylan Sousa age 11 (not pictured), of Wichita out of the canoe during a camp activity.

Pictured from left to right: Kyson Griffin, age 11 of Salina and Wesley Pried of Canton exit the canoe with help from Camp Counselor Jennifer Boucher last week during 4-H camp at Rock Springs. Rock Springs is located partially in Geary and partially in Dickinson County. Wednesday is the last day of the current session.

Tomorrow is the last day of camp for a lot of children — many of whom are 4-Hers at Rock Springs 4-H Camp.

This year, 23 children from Dickinson County participated in camp, including one non-4-Her.

They joined children from all over Kansas.

One of them was Christine Stoffer of rural Dickinson County who is a member of the Fragrant Hilltoppers 4-H Club.

Stoffer, who is 9 years old, said she enjoyed learning how to make tie-dyed clothes.

“I can make a shirt and I can take it home with me and I can show my parents,” she said.

Aside from tie-dying, Stoffer said she also learned teamwork skills, something she will put into use in everyday life after camp is over.

Another Dickinson County youth who took part in 4-H camp this summer is 16-year-old Amara Johnson of Abilene who is a member of Willowdale 4-H Club. Johnson’s role at camp was much different than Stoffer’s. She was part of the camp’s new Counselor in Training program. She still had the chance to take part in camp activities but also learned how to be a future camp counselor by shadowing and assisting full-fledged counselors.

“I just pretty much learn from them,” Johnson said.

She chose to take part in the new program because she has enjoyed the camp in the past.

“I have always loved 4-H camp,” Johnson said. “I have been here I don’t know how many years — maybe seven times — as a camper. I always had the best counselors and I just would love to maybe get a summer job later on when I’m old enough. I would love to have that impact on kids the way that others have impacted me.”

She said she found the group of adults and youth she worked with this summer fun and welcoming.

Johnson spent about a week at Rock Springs during which time she won an Otis Hall of Honor award from the camp, which is a camper-and-staff-nominated award.

In addition to the new Counselor in Training program, he said the camp had changed some of its processes.

“We’ve got a new open enrollment process for welcoming youth at anytime during the summer rather than being confined to their one, four-day session,” he said. “And then we’re providing some new experiences. We’ve got the giant swing, we’ve got the our ropes course for our older youth, we’ve got the zipline for our middle youth — those are some fun, new activities that we’ve got. We’re taking a new approach to some of our activities to make sure that youth have time to reflect on what they’ve done and to really enjoy and dive deep and so we’ve expanded some of our timing for some of our activities to allow them to really dig in and learn about what they’re doing and hopefully go away from here having had some great, fun experiences.”

He said the camp provided an opportunity for 4-Hers to apply the skills they spent all year learning through 4-H.

“One of the unique things about camp is that for a lot of kids this is the first time or one of the few times that they really get to be away from home and exercise their independence, exercise their decision-making, feel like they have a place they belong,” Worcester said. “And when that happens and we can put youth in that environment, they really get to be themselves and learn how to live, work and play with a new group of friends 24 hours a day for several days. And that’s an experience that’s important to youth as they go through their development and they begin to exercise more independence and more good decision making. It’s putting those skills that they’ve learned all year long to use in this environment.”

They’re having too much fun to realize they’re learning something, but they are learning, he said.

“Youth go away from here with a whole different perspective on how to work with their peers and their friends and how to navigate life together,” Worcester said.

He said he enjoys seeing children who have never spent much time away from home break free from their comfort zone for the first time.

“When I’m able to be here at the beginning of the session and the end of the session, I see kids one day one — they’re nervous,” Worcester said. “They’re away from home from the first time. They’re quiet. They’re not sure of what’s going on. Two or three days later, they’re completely different. They’re fully engaged. They’ve made new friends. They’ve found themselves. They’ve gained confidence. They’ve realized that they can navigate this on their own and that change happening in just a couple of days is pretty amazing.”

After several years of COVID-19-induced challenges, he said he was excited for camp this year.

“We’re so happy as we emerge from the last couple of years of challenges that camp is still important to youth and we’re glad to be having our 76th year of Kansas 4-H camp at Rock Springs this summer,” Worcester said. “We’re looking forward to continuing to build on what we’re doing.”

The camp added a health center with sick rooms and the zipline — which were entirely donor funded — last summer.

“It really lets us provide a more comprehensive experience from a health perspective here,” Worcester said of the health center. “Not just physical health — we’re thinking about (mental health). We’ve got space in their for youth who may be struggling emotionally or need a break — those sorts of things — so that they can get reset. And we want to make sure that we’ve got what we need to provide that.”

In addition to funding camp improvements, donors from across Kansas also provide scholarship funds to help children attend camp who might not otherwise be able to afford the experience.

At the helm of this are Camp Directors Jared and Letha Causby.

They only just started at Rock Springs this January having come from a YMCA camp in North Carolina where they spent a combined 15 years. Jared Causby said the experience so far had been positive for them.

“It’s been really fun just getting to know the new place and new people,” he said. “We’ve never even seen this side of the country, so it’s been awesome being a part of 4-H and being a part of Kansas and watching sunsets everyday and that sort of thing.”

He said they had enjoyed getting to know the camp itself and the people associated with it.

Some of their team members are as new as he is.

The Causbys are responsible for training camp staff and they spent weeks working with counselors and other team members before camp began.

“This being such a new setup and new model and everything, I think the challenge alone has been interesting and fun,” Jared Causby said. “It’s been really awesome getting to know all of our staff.”