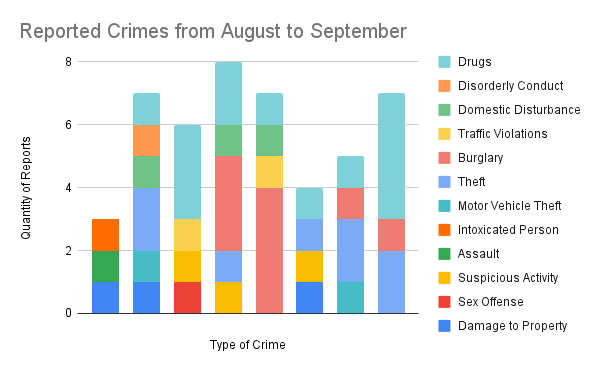 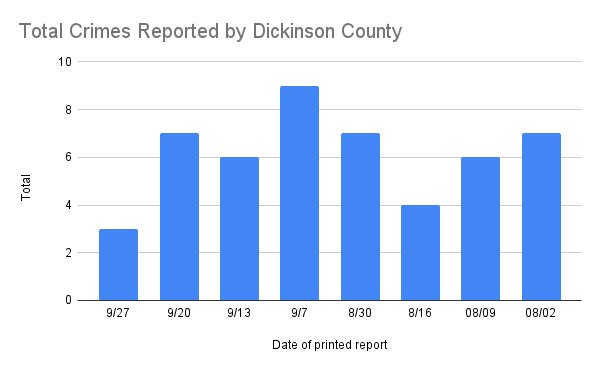 Going even deeper into the numbers, the Kansas Bureau of Investigations released Kansas Crime Index for 2020, which covers reported crime from Dickinson County and local police departments.

The sheriff office reported a total of 103 crimes with an estimated population of 8,580 locals that would make 12 crimes per 1,000 residents. KBI breaks down the 103 crimes into 21 violent crimes and 82 property crimes.

The Abilene Police Department recorded 82 reports with 13.4 crimes per 1,000 residents. The 82 reports break down to 12 violent crimes and 70 property crimes.

The Herington Police Department recorded 40 reports with 17.8 crimes per 1,000 residents.

The 40 reports break down to 8 violent crimes and 32 property crimes.

Chapman Police Department did not report any data for 2020 and Enterprise Police Department’s numbers were covered by the sheriff’s office.  KBI does not record drug investigations inside the crime index reports.

“Don’t put yourself in a bad situation,” Kleinbeck said. “The first thing we learned is to be cognitive of what’s going on around you and where you are at pretty much all the time.”

“I like the whole buddy system of going to the bathroom and girls do that, even guys do that,” Kleinbeck added. “

Please go to the bathroom together, so you always have that buddy with you.”

In the case that someone does try to assault a person, Kleinbeck reminds people to scream “Fire” instead of “Help me.”

“Don’t yell for help, because most people don’t respond to help anymore,” Kleinbeck said. “You yell fire. So, you yell fire, now their life is in danger. They’re going to look around and see what’s going on.”

Kleinbeck teaches self defense classes out of his gym, which focuses on just the physical, but also the mental way of staying safe.

“You’re just gonna freak out and you’re gonna get all your adrenaline going…You need to just stay calm, breathe and find your way out.”

While Kleinbeck gave advice on self protection, Assistant Chief of Police Jason Wilkins shared a reminder on how to keep property safe.

“In vehicle traffic, people can see items that are stored in the garage. Be certain that vehicles that are kept outside are locked and any valuables that are stored inside vehicles should be kept out of sight, such as computers, cell phones and things of that nature. We encourage anyone if you see something suspicious, please report it.”

On the seasonal side, Sheriff Jerry Davis wanted to share a reminder to all residents with Halloween just around the corner.