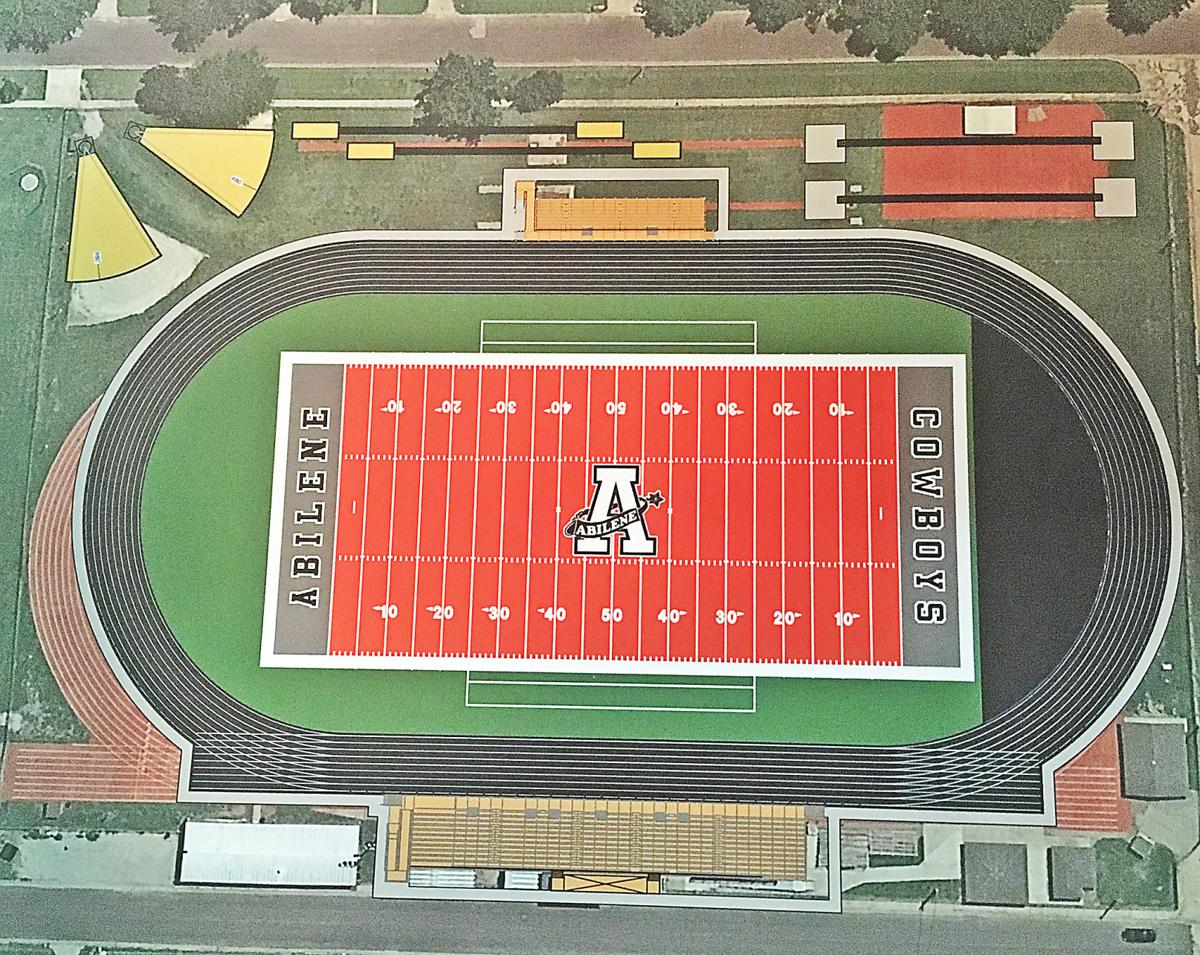 This rendering by Hellus Construction — a company that builds sports complexes, fields and stadiums — is an early look at a possible remodel of Abilene High School’s Cowboy Stadium. Hellus representatives gave a presentation to the Abilene school board Jan. 13 and later met in executive session with members to discuss costs. 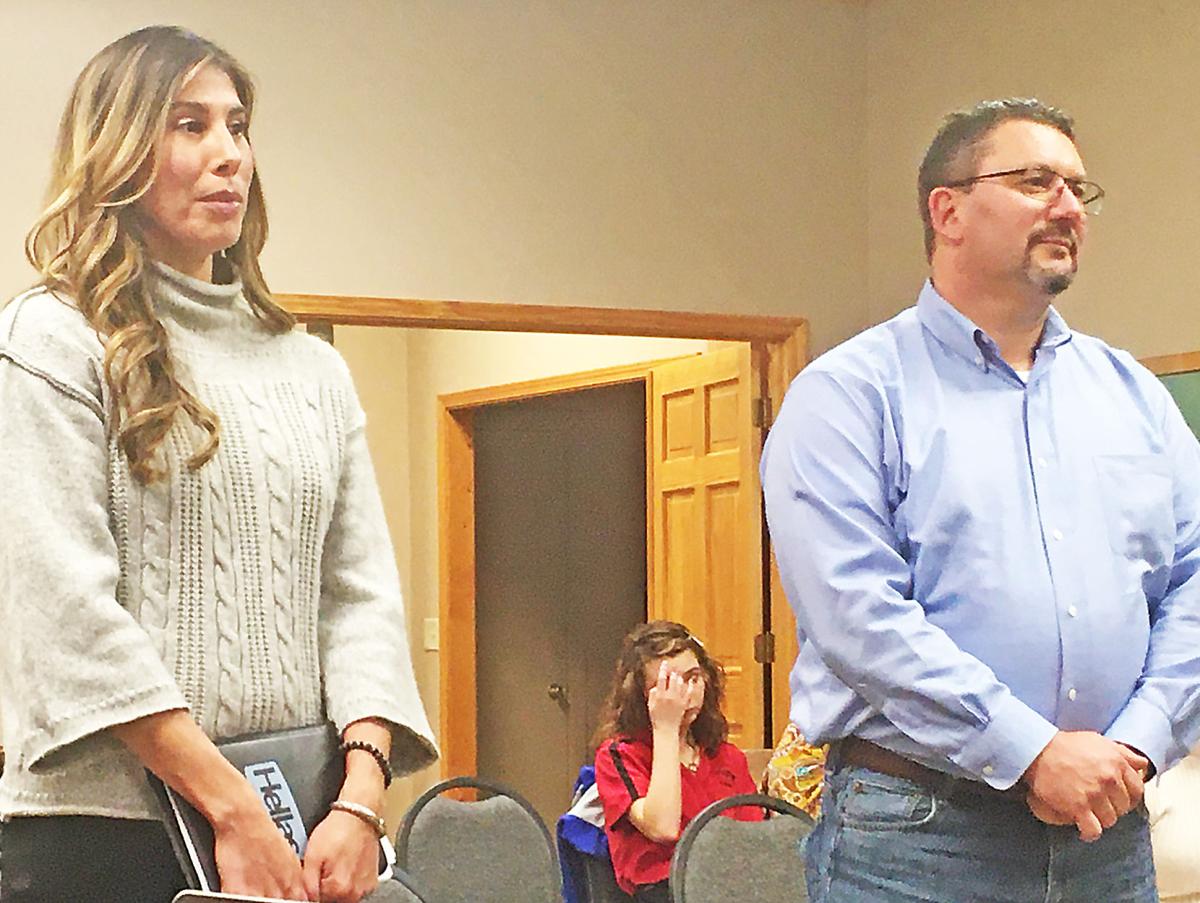 Tianna Flores (left) and Mario Albini with Hellas Construction, Inc., listen to questions posed by members of the Abilene Board of Education Jan. 13 following a presentation regarding the company and their services.

This rendering by Hellus Construction — a company that builds sports complexes, fields and stadiums — is an early look at a possible remodel of Abilene High School’s Cowboy Stadium. Hellus representatives gave a presentation to the Abilene school board Jan. 13 and later met in executive session with members to discuss costs.

Tianna Flores (left) and Mario Albini with Hellas Construction, Inc., listen to questions posed by members of the Abilene Board of Education Jan. 13 following a presentation regarding the company and their services.

Representatives from a sports construction company met with Abilene school board members earlier this month explaining why their organization should renovate Abilene High School’s Cowboy Stadium.

Tianna Flores and Mario Albini of Austin, Texas-based Hellas Construction, Inc., talked about the company and its products and showed photos of completed projects ranging from high school stadiums to professional sports complexes, including those used by the Dallas Cowboys, Houston Texans, Las Vegas Raiders and others.

Flores told the board she and Albini “listen to prospective clients” to learn wants and needs, then do the pricing and design to make sure “what you’re requesting is going to be the most functional for your facility as well as meet your budget,” she said.

Renovating the football field and track is a project that has been on the school district’s to-do list for years. It was one of three building projects scheduled to be completed with funds from the 2014 school improvement bond issue, but the stadium, the Vocational-Agriculture building and the bus barn were taken off the project list when costs ran higher than expected.

Afterwards, the board pledged to complete the projects in the near future, using capital outlay and other funding.

In 2019, a facilities task force, comprised of three school board members and the superintendent, began meeting to prioritize and make a plan to complete the projects.

The first project on the list is remodeling the district’s Vocational-Agriculture building. Work is now scheduled to begin at the end of the school year in May. Now the task force and school board are planning the stadium renovation.

After giving an overview of the company, Flores and Albini had photos from the company’s fiber and textile plants showing how “yarn” is made for artificial turf.

“So if you want to do something like an orange field, we can make that specifically tailored for your field,” she said.

Answering a board question regarding turf construction and concussion protection, Flores replied that synthetic turf is likely a softer surface than a natural grass field.

“How many school districts out there have a perfect natural grass field without paying an arm and a leg for that?” Flores asked. “This is a great way to protect your students.”

Materials used in the creation of synthetic turf are safe and long-lasting —some are more than 30 years old, the three said.

“Fort Hays (stadium) is one of our oldest,” Kuhn said.

When asked about maintenance, the Hellas representatives said the turf should be “groomed” often during football season, especially if other groups — like youth leagues — use it.

“We do have fields out there that we’ve come back to 8 to 10 years later — we look at it and reassess — and our grooming machine is literally still wrapped in plastic with weeds growing around it,” Flores said.

However, the field is still good even if it was not groomed regularly.

“But if you want to keep it as premier as you can and get that lifespan, you’ll want to groom it as often as you can,” she said.

Grooming is also a safety feature because unexpected items can end up on the field, including things like bobby pins.

“It’s these items that get picked up that make you want to keep your field clean. It’s almost like a carpet. You wouldn’t want to go eight years without vacuuming your carpet,” Flores said. “We’ve even picked up razor blades from fields while grooming which is scary.”

Track materials were discussed and the board wondered about the cost of a black track and if the black surface gets hotter than a red surface.

Flores explained black and red are standard colors so any other color would be an additional fee.

As for heat difference, Kuhn said she took a laser thermometer out to a black track at Maize South High School in June and discovered the black track was about 12 degrees warmer. However, intense heat is not usually an issue in Kansas because high school track season does not begin until March and is over by the end of May.

“But in the spring it can freeze all the way until April. I went in June and shot it just to see. It was one of the hottest days and it was about a 12 degree difference,” Kuhn said.

The company also provides the “amenities” — things like goalposts, bleachers, fencing and nearly “anything that goes along with a sports facility,” Flores explained.

The board looked at a rendering showing a possible remodel of Cowboy Stadium with 1,500 seats on the home side and 500 on the visitor’s side, a building for the home and visiting teams’ locker rooms, equipment room with roll up garage doors, coaches office, training room with showers and restrooms.

The main stadium entrance would likely remain on the north side of the stadium with a building that has ticket booth windows, areas for the booster club to sell items, men and women’s restrooms and a family restroom with changing table, a concession room and storage.

The building might be constructed with block, metal doors, and stainless steel or powder coated rollup windows.

“It looks good but it’s durable, something that lasts 50 years,” Albini said. “It will take the abuse and all the interiors will be block painted — easy for maintenance.”

Following the Hellas presentation, the board adjourned into what ended up being a 40-minute executive session for the purpose of discussing data relating to the financial affairs or trade secrets of corporations, partnerships, trusts and individual proprietorship.

No discussion or decisions were made following the return to open session, but the topic is expected to be discussed at an upcoming board meeting.