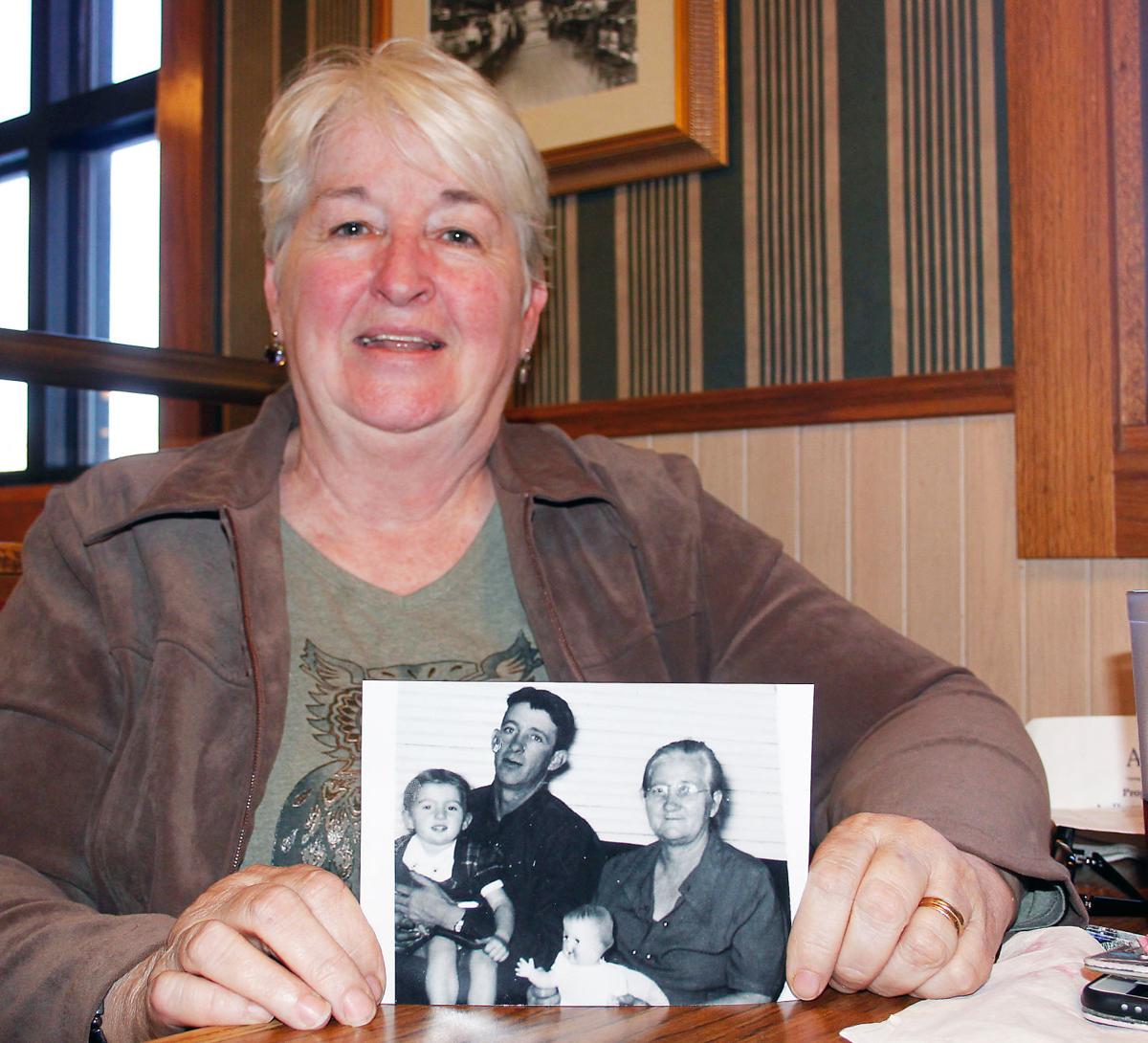 Nancy Kozlowski holds the only photo she has of her father and grandmother. The photo from the 1950s shows Nancy Kozlowski’s father, Clyde Miller, his mother, Louisa, and his niece, Vicki. 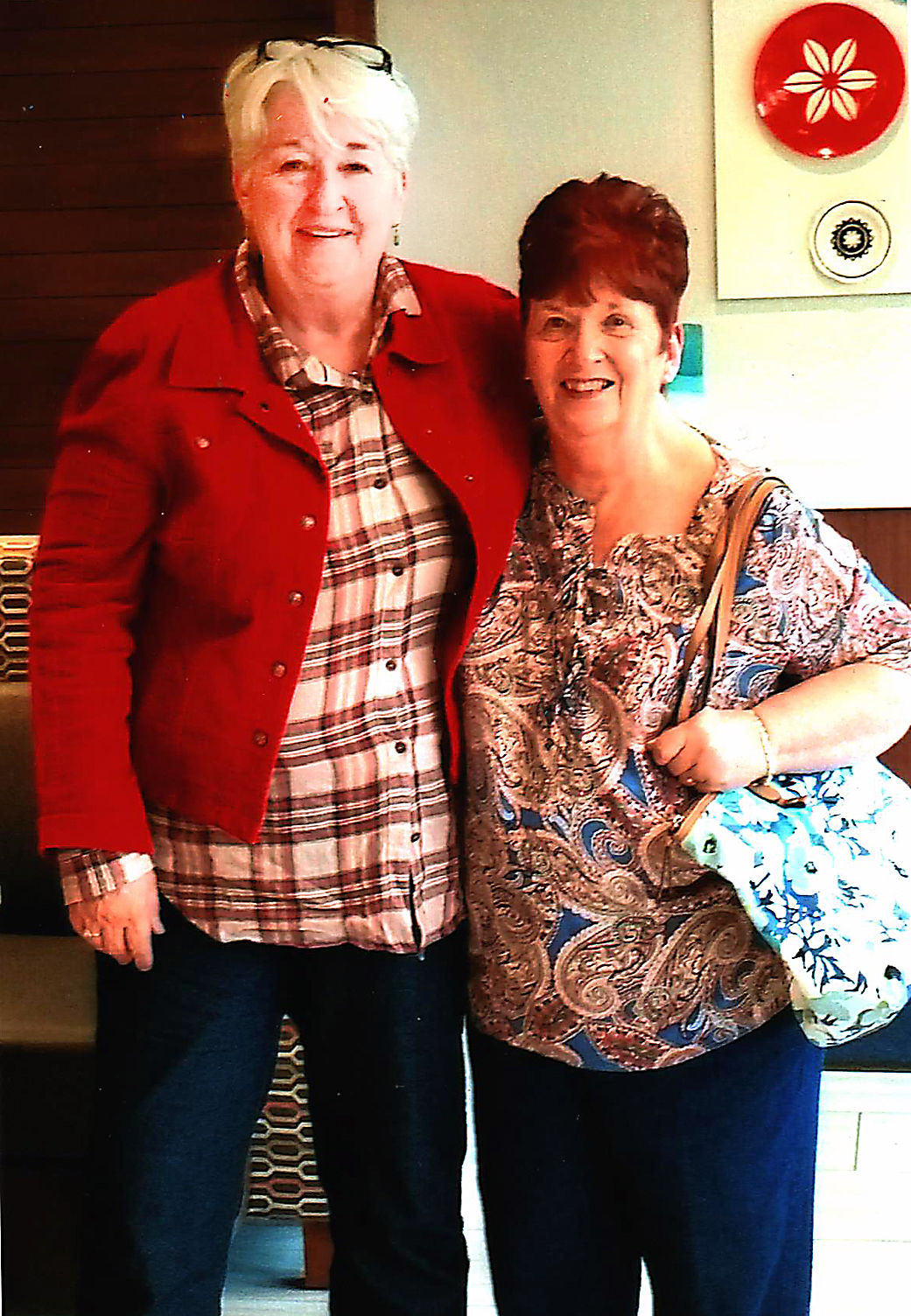 Kozlowski meets her half-sister, Sandy Wolf at the airport in Ohio in May.

Nancy Kozlowski holds the only photo she has of her father and grandmother. The photo from the 1950s shows Nancy Kozlowski’s father, Clyde Miller, his mother, Louisa, and his niece, Vicki.

Kozlowski meets her half-sister, Sandy Wolf at the airport in Ohio in May.

Nancy Kozlowski went searching for her father’s family on Ancestry.com because she needed to know his medical history.

She didn’t learn much about that, but she did find the one thing she really wanted, plus a half-sister which she didn’t know she wanted, but she did.

Kozlowski, who lives south of Chapman, never knew her father. He left her mother and her sister, who was about 3 years old, when her mother was five months pregnant with her. Her sister vaguely remembers him.

When Kozlowski developed thyroid problems, the doctor asked if there was a family history. She knew there wasn’t on her mother’s side but she didn’t know about her father’s side.

“We started Ancestry to look for my father in hopes that we could find answers for my thyroid issue,” she said. “Then I got very interested in it and was having a lot of fun with it.”

She started researching on Ancestry in January 2018 to see if anyone knew anything and she sent her DNA in.

“Her daughter and son gave her a DNA kit for a Christmas gift because they knew there had to be someone out there for Sandy,” Kozlowski said. “She was adopted shortly after birth. She knows nobody.”

After the results came back, Wolfe’s son Brian messaged Kozlowski with the news that she and his mother were closely related with the DNA results being “100 percent” certain.

Wolfe, who had been given up for adoption when she was 3 months old, had her original birth certificate and her father’s name on that was Clyde Miller, the same as Kozlowski’s.

Wolfe is 74, 10 years older than Kozlowski and was born in Ohio.

Kozlowski was born in West Virginia. Her mother married Clyde when she was 13 or 14 and he was about 30. That’s what they did then, she said.

Her mother was the middle girl of 16 children and her mother, Kozlowski’s grandmother, cooked for a lumber camp.

Kozlowski is trying to piece together her father’s history. A book Kozlowski has about the history of Pocahontas County where she lived in West Virginia mentions the O’Friehl family. O’Friehl was the maiden name of Clyde’s mother.

Apparently, the family also had connections in Ohio and Miller is a common Amish name.

At some point, the family moved back to West Virginia where Clyde’s father worked in the coal mines. He was killed in a mining accident when he was only 39, leaving his Irish-born wife Louisa Margaret “Maggie” and seven children.

As the oldest son, Clyde had to step up. His draft card which Kozlowski found excuses him from being drafted because he was the oldest and supporting the family.

As some point, the family moved to Texas where Clyde died in 1997.

Kozlowski also found cousins through Ancestry. One of the cousins, Vicki, who is in her 60s and lives in Las Vegas sent Kozlowski what she wanted more than anything: a photograph of her father whom she had had never seen.

“That’s been a lifelong wish, to at least see a picture,” she said.

The photograph shows Vicki as a toddler, Clyde Miller and his mother Louisa Margaret Miller.

“My cousin in Vegas commented he was a very quiet man, very quiet, very reserved,” Kozlowski said. “She said he never drove, never had a driver’s license, but always took very, very good care of my grandmother.”

Kozlowski doesn’t know what happened with her parents’ marriage. Her mother would never talk about it.

“Let it go, let it go,” Kozlowski said her mother would say when asked and would sometimes become very upset.

After her mother died in 2008, one of Kozlowski’s aunts told her that she finally could tell her the family secret, that her father had died only a few years before. Her mother had told her he had died shortly after she was born.

There must have been some sort of communication between her mother’s and father’s families because Vicki said Miller sometimes talked about his two daughters, “so he knew about me,” Kozlowski said.

After Brian Wolfe contacted Kozlowski, the two sisters began corresponding. In May, Kozlowski flew to Ohio to meet Sandy Wolfe.

She felt right at home in Wolfe’s house, she said. She and Wolfe have the same living room furniture, a blue and beige plaid sofa, the same end tables, even the same TV trays. Kozlowski chose the recliner in blue, though, while Wolfe opted for the beige.

“The coincidences of everything are just so funny,” Kozlowski said.

Each has two children, a son and a daughter, and seven grandchildren. Kozlowski’s sister and Wolfe have the same shade of auburn hair.

Both women like sweet tea and the same kind of pie.

“Sandy’s amazing,” Kozlowski said of her sister who volunteers as a paramedic and at a food pantry. Kozlowski herself arranged to talk about her new sister after her regular volunteer stint at Emanuel Lutheran Church in Abilene.

Even eerier, Kozlowski said, the name on Wolfe’s original birth certificate is Nancy Kay, the names of Kozlowski and her sister.

“Is that not weird?” Kozlowski wondered.

Both women probably had better lives than they would have if Miller had been part of them.

“I had a great life, I really did,” Kozlowski said. “My stepfather took us out of that poverty in Appalachia, West Virginia.”

Appalachia has a lot of poverty, no industry and a lot of drugs, Kozlowski said.

Kozlowski’s stepfather was in the military and took them all over the world. She has, besides her older sister, two other half-sisters.

Wolfe was adopted by a pastor and his wife and she has an adopted brother. But unlike Kozlowski, she hasn’t traveled far out of Ohio.

Regardless, they talk on the phone two or three times a week, Kozlowski said, giggling like teenagers according to Wolfe’s husband.

Kozlowski hasn’t given up her genealogical research. So far she has 66 people on her family tree and she’s still looking.

“It’s very addictive. It’s hard to put down,” she said.

She has the ancestry.com app on her cell phone so it’s always handy.

One of the things she’s looking for now is Wolfe’s mother’s family which is going slowly. Kozlowski suspects they might have been Amish so few records are available.

“It means a lot to have family connections,” she said.