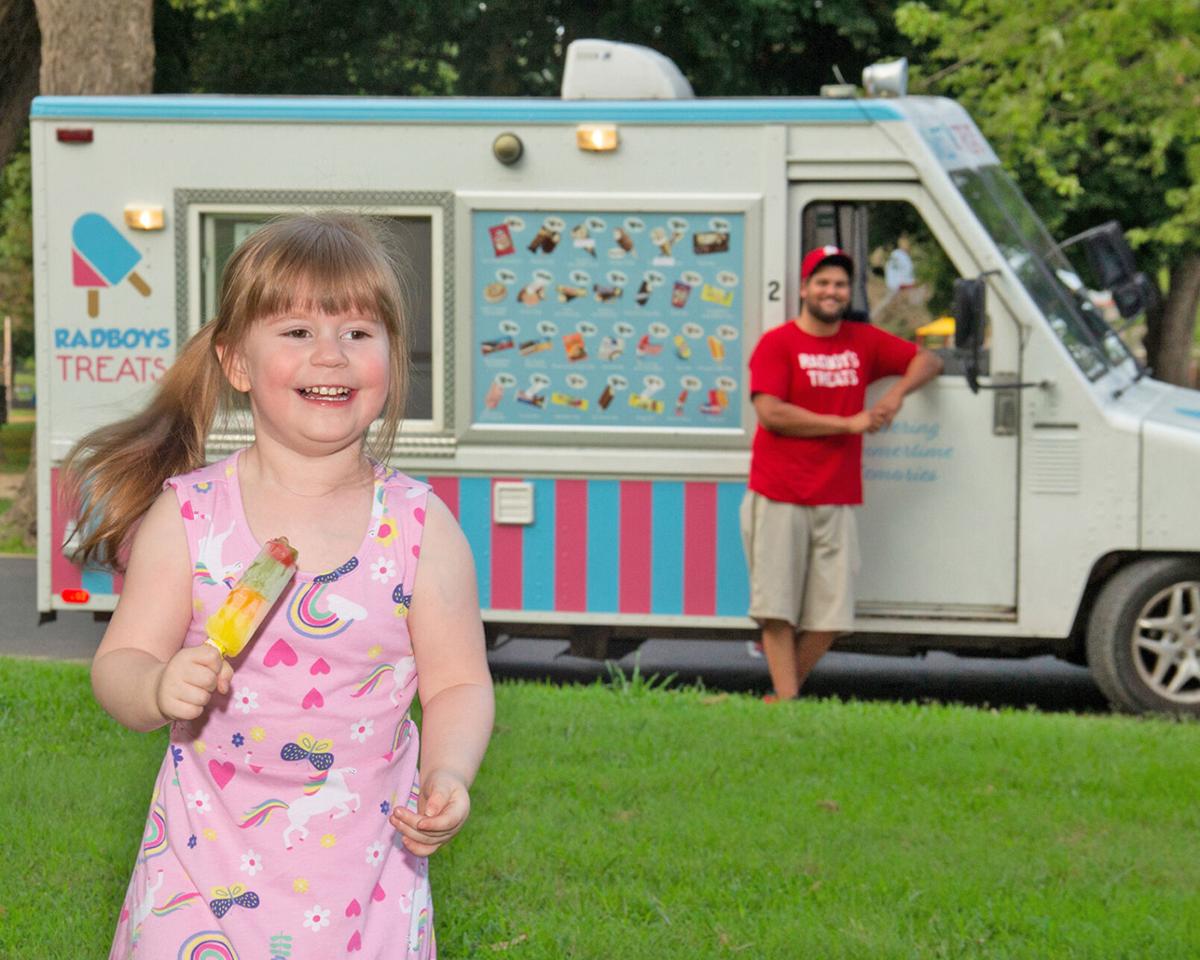 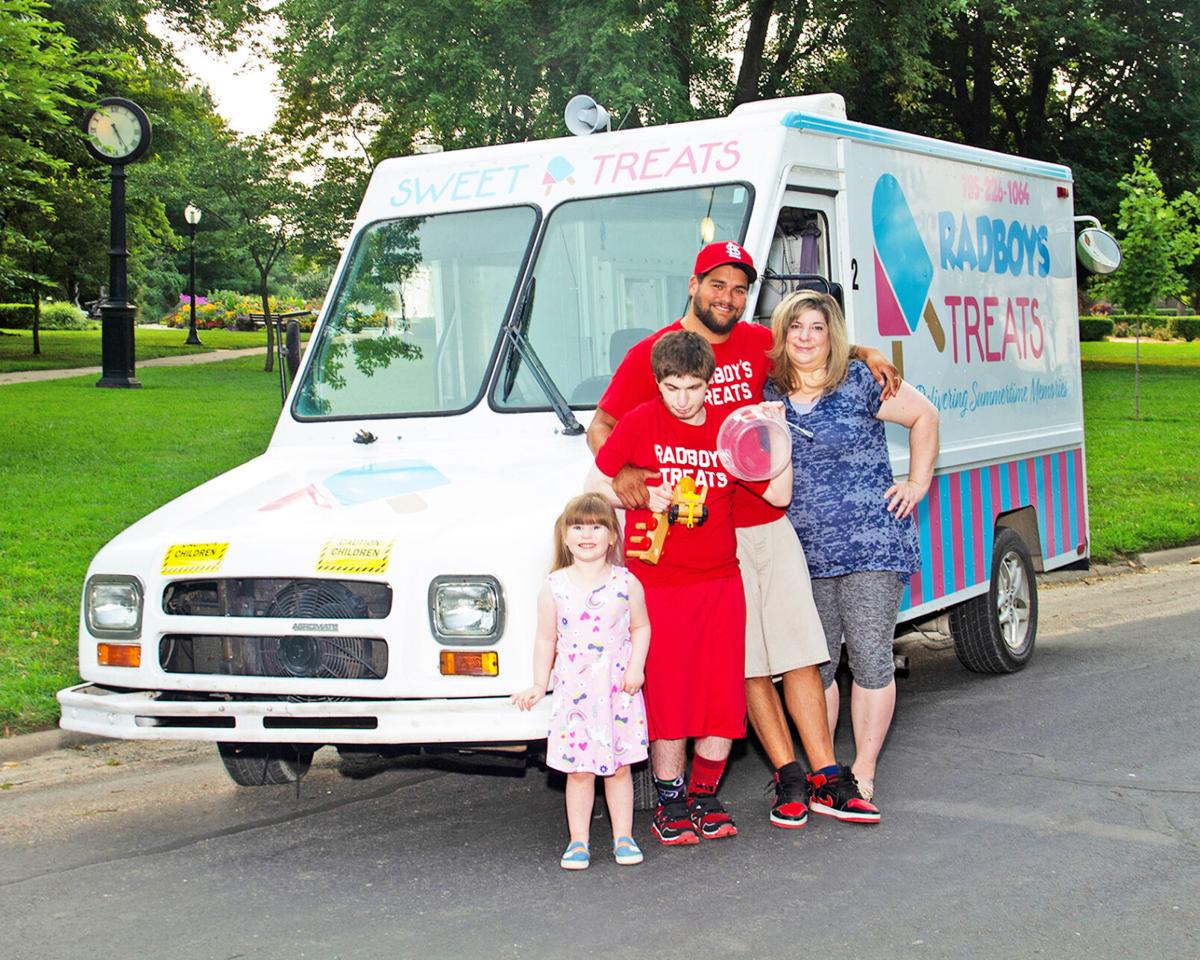 Sizzling hot summer days in Kansas are a perfect time for a nice cool ice cream treat. If you get the urge to have a Dove, Twix, Snickers or Oreo ice cream bar don’t leave home because RADBOYS TREATS may be right around the corner if you hear the Frank Mills song “Music Box Dancer” approaching in the distance. Collect your change and support one of Abilene’s newest local family-owned businesses. You will be greeted with a smile and delicious treat.

Richard Najera and his wife Angela Najera are the owners of RADBOYS TREATS ice cream truck. RADBOYS TREATS is named after their son Conner. His nickname has been Radboy since he was a young fellow. Rad is slang for exceptional. The Najera family moved to Abilene four years ago with their son from Junction City to purchase a home and possibly start a business. “We wanted Abilene to be our Mayberry,” Richard said.

They initially thought about opening a drive-in restaurant or malt shop, but it was to price prohibitive.  So, they decided they would buy an ice cream truck instead, because it was a better option for their family and the start-up costs were far less than purchasing a building. Operating an ice cream truck was also something Richard could do with his son. Conner has required special care since birth and had been home schooled by Angela until he turned 18 recently. “He is non-verbal, has difficulty walking and has been fed through gastrostomy tube since he was a month old. There is no conclusive diagnosis to Conner’s condition,” according to Richard.

Richard and Angela met in Junction City while he was stationed at Ft. Riley as a tank mechanic. After leaving the Army in 2006, Richard worked as a correction officer for several years before taking a job as student support monitor at Seitz Elementary School at Fort Riley for seven years.  He worked there until the fall of 2020 when Angela needed surgery and she could not take care of their son Conner who requires 24-7 care or their 3-year-old daughter Celine.

“Last year was like the perfect storm. My wife needed surgery, our son and daughter required care and we were dealing with the Covid-19 pandemic,” Richard said.

“Angela and I decided it might be better for me last fall to resign my full-time position at Seitz Elementary School and I became a classified substitute in the same school instead.  The circumstances of last year just motivated us to pursue our dream of opening a business. I started looking for the ice cream truck over three years ago, but we couldn’t find one that fit our needs or budget. The price of a used truck can start at $5000 and a new one can cost upwards of $60,000. There are only 20 to 30 used ice cream trucks for sale in any given year in the United States. Last October I found the truck I wanted in Fargo, North Dakota. I was a little hesitant about driving over 500 miles to Fargo to meet the owner of the truck because I had previously flown to Arizona to purchase a different truck and the sale fell through. But I am so grateful I did make the trip to ND. The gentleman I purchased the truck from did not charge me to have it shipped to Abilene last November. He also has provided me so much information about running an ice cream truck business and has become a mentor to me,” Richard said.

RADBOYS TREATS first started their rounds around Abilene in May.  Everything was going great until the engine blew in their 1991 truck in June. Richard added, “It was a little difficult because the engine repair cost was as much as we made during the whole month of June.  M & M Tire & Auto, Inc. put a rebuilt engine in the truck for us. They were amazing to work with, very fair and believed in our business. We are once again doing our rounds and business is going great. The welcomeness of the community of Abilene and surrounding areas has been amazing.”

Most days RADBOYS TREATS start their rounds at 12:00 PM and end around 8:00 PM. They drive between 30 to 50 miles a day zigzagging up and down the streets of Abilene and surrounding communities each day. Conner usually accompanies his dad 50% of the time depending on how hot it is outside. Richard stated, “He likes riding around town and turning the music switch on and off. It also works out for Angela because she gets a little break from her daily caregiving.”

They operate 6 or 7 days a week depending on the events scheduled. He plans to cut his hours of service in September to weekends only. Richard said, “It would be great if we could continue doing rounds through October, if the weather permits. Next year our goal is to start up service again in late March. We are a family-owned business just trying to provide the best service we can.”

RADBOYS TREATS serves the communities of Abilene, Chapman, Enterprise, Ft. Riley, and Solomon. They have their daily routes, but also attend private parties, weddings, corporate events, and festivals. Their base fee is $20.00 per hour or the cost of the ice cream. Prices range from $1.00 to $4.00 per item. They offer over 20 cool treats to choose from including: ice cream bars, sandwiches, cones, cups, and popsicles too. Richard’s favorite is the Choco Taco ice cream bar and one of his best sellers.

One of Richard’s fondest memories of his childhood growing up in Sacramento California was when he heard the ice cream truck coming and he would wave down the driver to buy something with the change he had in his pocket. RADBOYS TREATS would like to create special memories for Abilene and surrounding communities of all ages. “Delivering summertime memories” is RADBOYS TREATS moto.