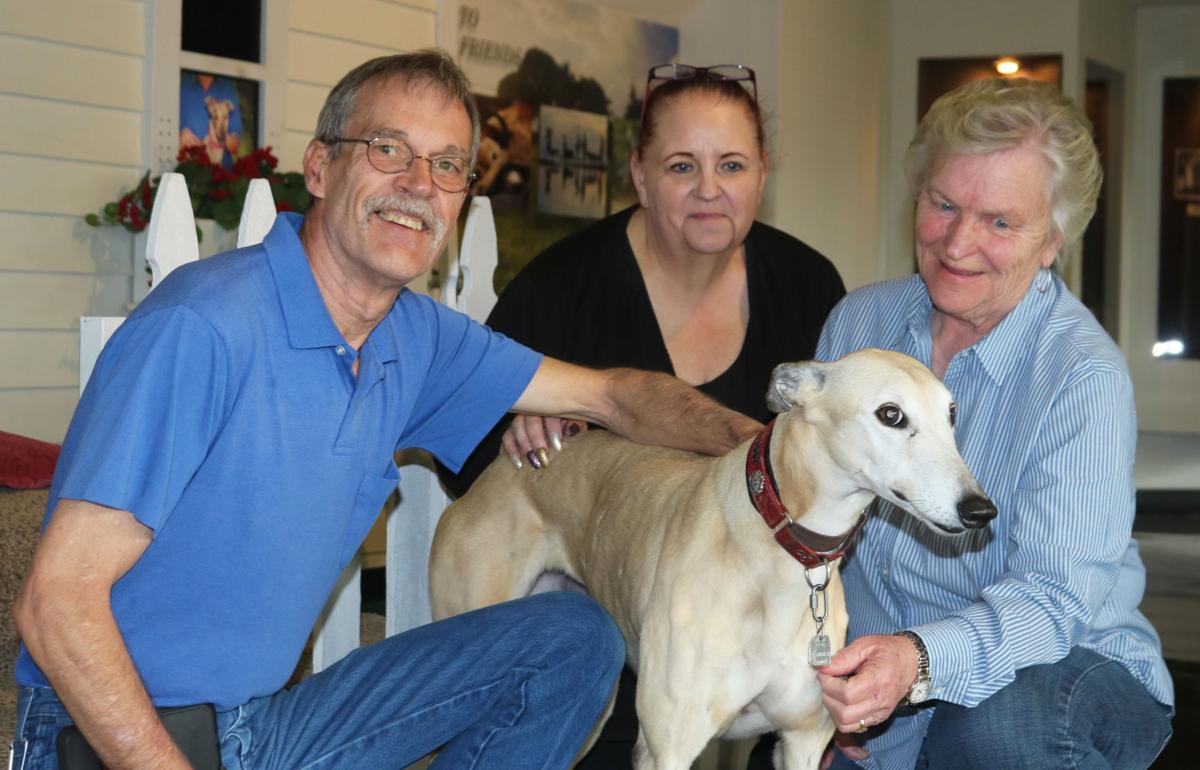 This morning the Greyhound Hall of Fame opened to visitors for the first time since mid-March. Pictured with Ginger the greyhound are from left, Warren Kready, Carlena Lindsey and Manager Kathy Lounsbury. 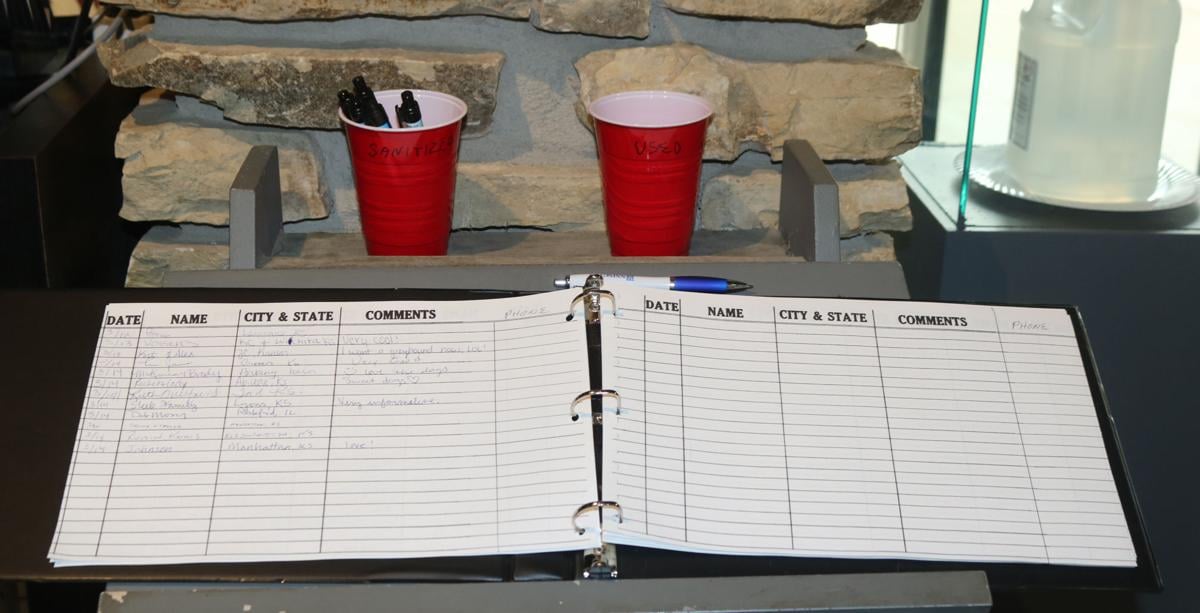 The guestbook, which the Kansas Department of Health and Environment wants names and phone numbers listed, has a cup for pens that are sterilized and a cup for placement of those after they are used.

This morning the Greyhound Hall of Fame opened to visitors for the first time since mid-March. Pictured with Ginger the greyhound are from left, Warren Kready, Carlena Lindsey and Manager Kathy Lounsbury.

The guestbook, which the Kansas Department of Health and Environment wants names and phone numbers listed, has a cup for pens that are sterilized and a cup for placement of those after they are used.

Ginger has been patiently waiting to greet visitors.

Her co-greeter, Buddy, has yet to see anyone walk through the front door of the Greyhound Hall of Fame.

Ginger and Buddy are retired racing greyhounds that are the official greeters at the Hall of Fame located on South Buckeye Avenue.

The museum has been closed since mid-March because of the COVID-19 pandemic.

Since then, Gary died and Buddy has been a greeter in training.

Manager Kathy Lounsbury is expecting a busy Memorial Day weekend as people are anxious to get out and do something.

She was hoping to open the door — there are separate “In” and “Out” doors — last week but that got delayed when Kansas went from Phase 1 to Phase 1.5.

Both liquid and gel sanitizer is all over the building. There is even separate wastebaskets at the door for discarded gloves and masks.

“The state has asked us to collect names and phone numbers in case they need to get in touch. It’s one of their recommendations,” she said.

The guestbook has two containers. One contains sanitized pens and one for used pens.

Lounsbury said there are counters to keep track of the visitors as the new Phase 2 rules limit groups to 15 or less.

“Being that it is a holiday weekend and there isn’t anything else open, we’re going to have to keep track of that,” she said.

The water fountain has been covered.

“The displays the way they are set up are just fine,” she said.

Most of the museum contains graphics and videos.

There are two exceptions: the racetrack model and the pioneer section which is touch-screen driven.

Disinfectant wipes are beside the racetrack model so viewers can use those to punch the buttons.

The display playing different videos explains how fast a greyhound runs, how far they run and other aspects of a greyhound racetrack.

“Anything that is touchable is covered,” she said.

She said staff will regularly wipe everything down once visitors leave.

Visitors watching replays of the Hollywood World Classic will have to socially distance themselves as the bench has been removed.

“We changed that so anyone watching the video will have to stand. It’s personal responsibility,” she said.

There are also videos of the Night of Stars races and a video on Talentedmrripley. The two-time captain of  All-American greyhounds was once a greeter at the Hall of Fame. He was also inducted into the Hall of Fame in 2008.

Both greyhounds will be confined and not allowed to roam around like before the COVID-19 pandemic.

Staff has been busy cleaning floors, shampooing carpet and other maintenance projects.

“I am fortunate to have Warren (Kready) and Carlena (Lindsey) at getting stuff done and keeping it done,” Lounsbury said. “Since we’ve been closed, we’ve been working on maintenance we couldn’t do with visitors, like getting the floors waxed and the dog in the back painted.”

Admission is free but cash or credit card donations are welcome.

“Since we operate strictly on donations, since we have been closed, there has been zero income,” Lounsbury said.

The Hall of Fame also receives funds from an special auction at the National Greyhound Association’s meets held twice year. However, when the NGA runs its spring meet in the first week in June, the Hall of Fame auction that Tuesday night has been eliminated. Some items with proceeds to the Hall of Fame will be mixed in with the track stake auction on that Friday in June.

That auction normally held at Sterl Hall will be held at the Greyhound Hall of Fame.

“We will have no evening events,” Lounsbury said. “There will be no Tuesday night auction which benefits the Hall of Fame. The induction ceremony has been canceled.”

Plaques for the All-America Team, Rural Rube Award and Flashy Sir Award will be mailed to the recipients.

Despite the tour that prides itself as being “hands on,” Terry Tietjens and Michael Hook had lots of sanitizer available when the tours started at 10 a.m. today..

Visitors can still bowl and play the piano. Both Tietjens and Hook will be wearing masks and it will be up to the visitors if they want to wear masks.

Tours will be limited to a total of 15 people in the building at one time.

“Our plan at this time is to start operating on May 23, 24 and 25 with steam locomotive #3415 pulling the train on those dates.

“We will open all three cars so passengers can spread out.

“We suggest that passengers wear face masks. We then hope to continue our regular schedule unless the state requires more restrictions due to Covid-19.

“The dinner train and Silver Flyer Railbus excursions scheduled on May 23 have been canceled.”

“We are continuing to monitor the evolving health situation regarding COVID-19 treatments, developments, and updates. The health, safety, and comfortability of our patrons, staff, volunteers, and community are of the utmost importance to us.

“We will continue to follow the changing guidelines of our government and local health officials regarding all procedures moving forward.

“We acknowledge that many patrons may be waiting to hear what our final decisions and protocols will be in regards to our 26th season and functionality in the future.

“It is assured, that after conversing with health officials, our staff, and board, we will clearly communicate upcoming policies and adjustments regarding future events.”

No official date but sometime mid June has been set for opening.

“At present, our facility remains closed to our staff and the public until further notice.

“As a federal government agency, we will only open our facilities when our assessment aligns with the criteria and requirements laid out by the Office of Management and Budget and the Office of Personnel Management.

Open but limited to 15 in a time. Members as they enter complete a screening, and take their temperature. There are sanitizing stations in all workout areas and members are encouraged to disinfect equipment before and after use. No group fitness classes but are doing one on personal training sessions by appointment only.