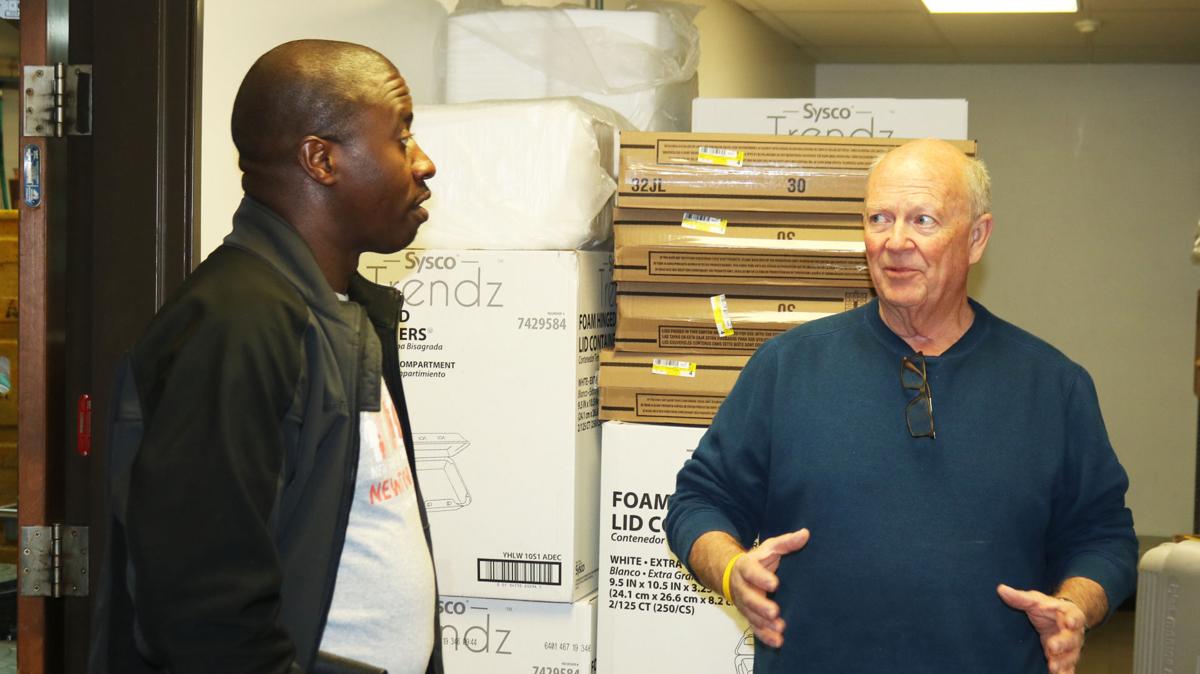 Mark Martin, right, discusses with some of those items being donated with Abilene Food Service Director Caleb Angolo. 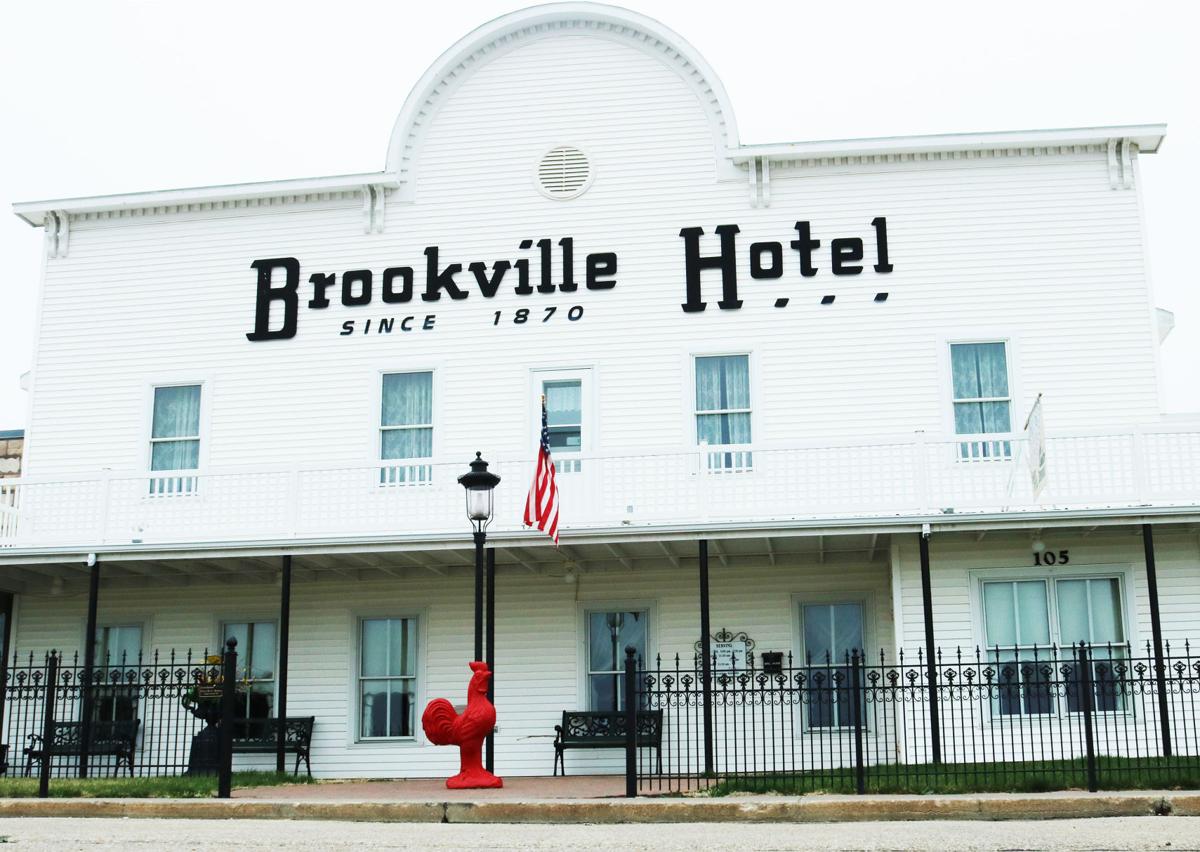 The Brookville Hotel, which opened 150 years ago and was located the last 20 years in Abilene, closed recently.

Mark Martin, right, discusses with some of those items being donated with Abilene Food Service Director Caleb Angolo.

The Brookville Hotel, which opened 150 years ago and was located the last 20 years in Abilene, closed recently.

What started off as one of the busiest years of the 20 that Mark and Connie Martin have been serving their famous family-style chicken dinners at the Brookville Hotel in Abilene ended Sunday, March 15.

“We determined there was not enough income for us to muddle,” said Mark Martin. Brookville had closed its dining room and was just serving carryout orders. “It would be working ourselves into a bigger hole than we already have. And so, at this point, if there is a potential at all, it might be Easter for us to open. Even then, it’s one of those things that we are wishing for but the wishes may not happen.”

The closing sent 33 full-time employees to the unemployment line and meant a loss of extra income for part-time workers.

With a large supply of food and products on hand, Martin and his wife Connie donated them to the Abilene public schools.

“I have some stuff that obviously is going to be outdated and I need to get that out,” he said.

“Who am I going to sell them to?” Martin said of the stuffed animals. “Not anybody for a while but they might make somebody’s day.”

Martin said the restaurant generally didn’t use frozen chicken but when overstocked, some were sent to the freezer.

“They are pretty utilizable,” he said. “We’ll just have to see if they have a use for it. It’s all going to age out.”

Caleb Angolo, Food Service Director, said there would definitely be a use for everything.

He said that on Thursday 928 lunch and breakfast combination meals were given out to the school district students. He expected over 1,000 on Friday.

“What is happening right now, we are thinking down the road we will start doing some hot meals,” Angolo said. “That is where all this will come into play.”

He said the school lunches are now cold items.

“Nobody saw this coming,” he said.

The school district is getting its food supplies from F&A Food Sales located in Concordia.

F&A Food Sales generally delivers once a week and has stepped it up to twice a week. He said milk is being delivered daily.

“My unfortunate feeling is that this is going to be far longer than we think,” Martin said.

He said the hotel parking lot across the street from the Brookville Hotel doesn’t have a lot of cars.

“Nobody’s going down the road,” he said.

Martin said 2020 looked to be a banner year for the Brookville Hotel.

“This was supposed to be, potentially, a really good year for Brookville,” he said. “It truly is up in the air now.”

He said when there is travel from state to state again and the fear of getting on a tour bus or an airplane ends, they will look into reopening.

The Brookville Hotel traces its roots back to the 1870s when the railroad spread their tracks out across the prairie to meet the expected rush of Longhorn cattle coming up from Texas along the Chisholm Trail, according to its history.

In 1894 Gus and Mae Magnuson purchased the hotel. It was Mae’s cooking that started the hotel’s reputation for great food, but it was the Magnuson’s daughter, Helen Martin, who originated the famous “Family Style Chicken Dinners” in 1915. In 1933, the Hotel passed into Helen’s capable hands.

Additions were made to the Hotel in 1948 and 1960 by the third generation family member Cal Martin who became a partner in the management of the hotel. Further additions to the Hotel were made in 1971 and 1978, increasing the serving capacity to 200.

In 1982, the ownership of the hotel passed to Mark and Connie Martin, the fourth generation to serve the famous Brookville Family Style Fried Chicken.

In 2000, the decision was made to move the restaurant to Abilene, locating the restaurant closer to the Interstate Highway which brought a steady stream of people searching out the best fried chicken dinners in Kansas.

Back in the ‘70s my partner and I were on patrol ( Saline County Sheriffs Dept) we checked the town of Brookville. We drove down the alley and we checked the back door of the hotel and found it unlocked. We had the dispatcher call Mrs Martin to come down and lock up. When she arrived, she asked if we would walk through the hotel and check all the rooms,which we did, finding no one inside we three got ready to leave. Mrs Martin said “Wait just a minute“ and she came back with two bags of chicken for us.

We drove across the road and ate chicken 😀 and pitched the bones out the windows. We got off at midnight and when I came home my wife was asleep, I went to her side of the bed and opened the bag of chicken as the smell waffled from the bag she said “ You’ve been to Brookville”!

That story is PRICELESS! I agree! NOBODY makes Fried Chicken and that FAMOUS BROOKVILLE CORN like the Brookville Hotel does!!!

Connie and Mark isn't just all about business and makin that mighty dollar... they have true HEART and truely care about all their employees and customers!

Thank you Connie and Mark Martin for Everything you do!