The world's largest operating steam locomotive, Big Boy No. 4014, attracted thousands of people when it made a stop in Abilene on Wednesday. The train was making a tour in commemoration of the 150th anniversary of the completion of the Transcontinental Railroad. 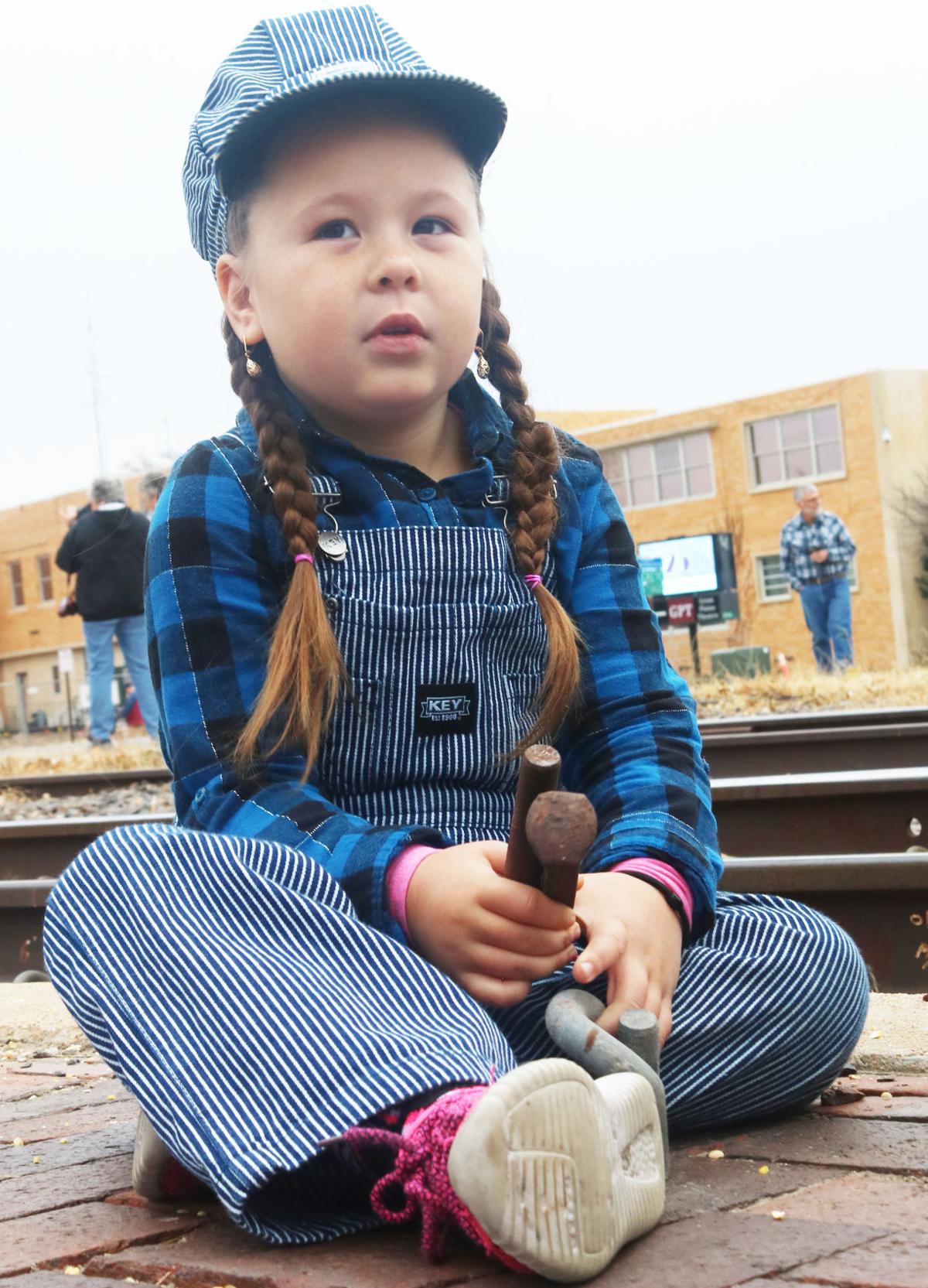 Alexis Johnson, 4, from Gypsum, dressed the part to follow the stream locomotive from Abilene to Salina on Wednesday.

The world's largest operating steam locomotive, Big Boy No. 4014, attracted thousands of people when it made a stop in Abilene on Wednesday. The train was making a tour in commemoration of the 150th anniversary of the completion of the Transcontinental Railroad.

Alexis Johnson, 4, from Gypsum, dressed the part to follow the stream locomotive from Abilene to Salina on Wednesday.

A big fan of Thomas the Tank Engine, Alexis Johnson, 4, of Gypsum was among many who followed the Big Boy steam locomotive through Kansas Wednesday.

She and others patiently waited for the train to arrive in Abilene from Topeka, many following its journey.

“Thomas, that’s her favorite,” said her mother Manuela Johnson of the toy train. “We’re gong to follow the train to Salina.”

Crowds in the thousands greeted Big Boy No. 4014 which is the world’s largest operating steam engine from Topeka to Salina.

In Abilene groups of watchers armed with cameras and cell phones stretched from Brady Street to Mud Creek.

It was about 45 minutes late arriving shortly before 1 p.m. but the crowd seemed to grow during the delay.

Many were checking the location of the locomotive on a phone app.

Aaron Bruna of Abilene took over the controls as conductor Thursday morning in Salina, headed for Hays.

Bruna said he just asked to be on it.

He is a Union Pacific conductor running from Salina to Kansas City.

Bruna said it will be his first time in a steam engine.

“To me personally, it is an honor,” he said of conducting a steam train similar to the one his great-grandfather Jim Roberts piloted in Marysville.

“He ran them when that’s (steam) all they used, before the diesel engines came around. That’s quite an experience for me,” he said.

Bruna said he was among the crowds of people that were in Abilene when the train stopped Wednesday.

Ben Jones with Union Pacific said the crowds have been amazing.

“I have been following it through Kansas. I was with it yesterday and we have had a tremendous turnout to see this tremendous piece of history coming through,” he said. “It is the largest steam locomotive and we are happy to bring it here today.”

It will travel through Kansas, Colorado, and eventually to its home in Cheyenne, Wyoming.

“It has had 20 years of service with the railroad. This was built for hauling freight, especially up high inclines,” Jones said. “We had it refurbished specifically for the 150th anniversary that we celebrated this year of the completion of the Transcontinental Railroad.”

It will be used for programming at the library and museum next year, said Meredith Sleichter, director of the Eisenhower Foundation.

Jones said the Transcontinental Railroad was completed on May 10, 1869 in Utah.

“Part of that history 150 years ago, the Central Pacific and Union Pacific hired two photographers to take pictures of the people building the railroad so they could show investors and other people out east that the world was going to change with the completion of the Transcontinental Railroad,” Jones said in presenting the Abilene Public Library the book “Race to Promontory: Picturing The First Transcontinental Railroad,”

He said the book was produced by the Union Pacific and is not for public sale.

“We do want to give it to the public library here so folks can come by and look at it,” he said.

Books on safety around the railroad with Clifford on the front were also given to the library and Abilene schools.